Home Investigations TRUTH JIHAD: “No statute of limitations on treason or murder!”

Karl Schwarz is a Republican tech-sector businessman who refused to drink the neocon kool-aid. An early and outspoken 9/11 truth supporter, he is one of our most eloquent voices calling out the neoconservatives for their 9/11 coup d’état and the disastrous series of wars it triggered. In this interview Karl discusses Zionist involvement in 9/11, enabled in part by the “back doors” built into US communications networks by Israeli companies; Rebekah Roth’s discovery of boxes full of demolition switches brought into the World Trade Center before 9/11 by the Israeli-connected Gelatin “art students”; dancing Israelis’ spymaster Dominik Suter‘s role in financing 9/11; Dynport Vaccine Company’s likely role in the anthrax component of the 9/11-anthrax operation as well as its  poisoning US troops with huge numbers of dangerous, unnecessary, highly profitable vaccines; and much more.

Below is Karl’s latest article.

Russia is Anti-ISIL; USA and Israel are ISIL

by Karl W. B. Schwarz

There is much handwringing and shrill warnings out of Washington DC about ‘Russia in Syria’.

Has there been a Russian invasion?  No.  Are Russian troops there killing the USA-sponsored ISIL? Not yet.

What is the problem then?

Egg all over the face of Washington DC Neocons and some dog pooh on their shoes, too.

In the First Chechnya War the CIA and Clinton Administration launched a failed bid to use “Al Qaeda” in the Muslim areas of Russia itself.  The Russian provinces of Chechnya, Ingushetia and North Ossetia are on the north side of the Caucasus Mountains, site of the Sochi 2014 Winter Olympics.

That is right, American Sheeple, the USA was directly waging a covert and proxy war against Russia on their own territory.  Maybe… just maybe… Americans would wake up to realities if either Russia or China did the same to North Carolina or Virginia.  Put a proxy war right into the faces of Americans just as America has done to the Russians.

Maybe it would sink in faster if the Proxy War was launched at Hollywood!

That might wake up a few folks on facts versus DC Fantasy Land lies.

Does ‘Ossetia’ ring a bell in your American Sheeple head?  How about South Ossetia, August 2008 when the Bush Administration had Georgia launch an assault in the middle of the night to push back Russia and take over a tunnel that runs under the Caucasus Mountains between North and South Ossetia.  The Bush Administration never admitted that he had put about 4,000 Blackwater USA mercenaries in Georgia for the next USA Proxy War and pretend the USA did not do anything wrong… like a war crime.

The Bush Administration failed to take over the North-South Ossetia Tunnel, too.

Purpose for such an idiotic idea?  South Ossetia is a separatist region of Georgia that decided to keep their Russian passports and citizenship and not be under the boot heels of the anti-Russia agenda by the USA and NATO.  There are three such areas of Georgia; South Ossetia, Ajaria and Abkhazia; none of them wanted to be part of the USA-NATO gig against Russia. 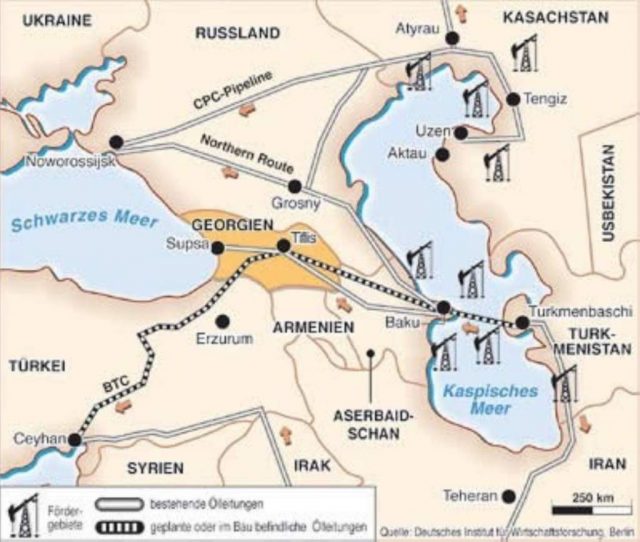 Getting the picture clear in your head yet?

It was not ‘Russian aggression’ in South Ossetia; it was USA aggression towards Russia.  I wrote the key articles that proved to EU and OECD that it was USA and Georgia that stirred up the hornet’s nest and got their asses kicked hard and firmly by the Russian counterattack.

On an almost parallel track the Bush Administration had these same Neo-Nazi numb-skulls from western Ukraine in Chechnya for the Second Chechnya War.  This time after knowing that the violence was a direct CIA – USA matter in Chechnya, the Muslims of Chechnya fought alongside Russia and won that second war, too.

I have written on that matter this year:

Well, you can just imagine all of the ‘panties in a wad’ in Washington DC when they got defeated twice in Chechnya, once in South Ossetia and then turn right around… using the same numbskull Neo-Nazis they have groomed for years… and got their asses kicked black and blue in the Donbas Region of Ukraine.

Are your brain cells working and following the chronology, getting the picture firmly in your brain?

The problem the Neocons have regarding Russia is they cannot contain a Superpower, regardless of what the lame-brained Wolfowitz Doctrine says.  They can beat up and bully tiny little nations that have no real military and cannot even win those disputes.

This ‘mightiest military on Earth’ mantra is wearing very thin since they have lost over and over again since September 11, 2001.

The US has been caught over and over again doing ‘precision air drops’ right into the hands of ISIL.  The US has recruited them, trained them, financed them, armed them and then pretends nothing is amiss.

Some reporters have even taken photographs of ISIL fighters coming into Israel and getting both supplies and medical aid.  Precision air drops right into the hands of the people DC claims they are fighting.

There is a moral to this story: Never lie to create a war against Islam because some assholes in the US and elsewhere thought it was a Really Cool Idea.

Read this and think about the past 14 years of your life.

Russia is on the moral high ground; Washington DC is not.