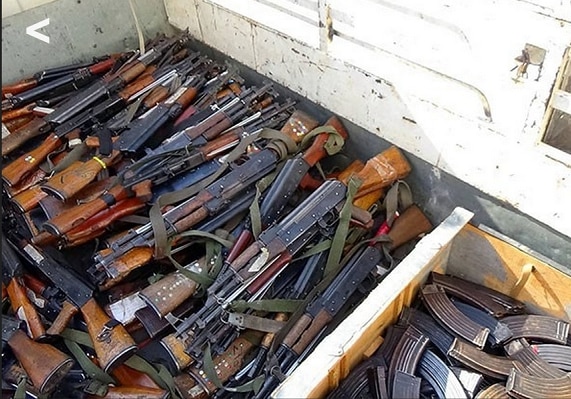 Over 1,000 Militants Surrender to Syrian Army in Daraa

TEHRAN (FNA ) – Over 1,000 terrorists have laid down arms and surrendered to the Syrian authorities over the past 24 hours in Daraa, Syria’s National Reconciliation Committee announced on Monday. The photos show those who have surrendered in an official ceremony where they are pardoned by the government. [PHOTOS]

TEHRAN (FNA ) – Informed sources said that at least eight ISIL militants were killed and several others were injured in coordinated operations of the Syria Army troops and the country’s Air Force in the Southern countryside of Damascus.

The sources said that the Syrian fighter jets launched a series of airstrikes on the ISIL positions in the nearby areas of al-Taqadam, Yarmouk camp, and al-Tadamon, hitting a number of sites of the terrorist group.

The sources added that the Syrian warplanes struck the terrorist group with 12 airstrikes in the three abovementioned districts, which once were under the control of al-Nusra Front and the Free Syrian Army (FSA), but they were captured by the ISIL in the Spring of 2015.

Following the conclusion of the Syrian airstrikes, the Palestine Liberation Army (PLA), in coordination with the Popular Front for the Liberation of Palestine-General Command (PFLP-GC), Fatah Al-Intifada, and the National Defense Forces (NDF), carried out an attack against the ISIL at 30th Street in the Yarmouk camp, killing at least eight militants.

Last week, military sources said that the Syria Armed Forces stormed the positions of Jeish al-Islam militant group near Harasta in Damascus governorate, and pushed them back towards the city’s highway.

The sources said that the Syrian Army’s 105th Brigade of the Republican Guard, in coordination with the National Defense Forces (NDF) and Palestine Liberation Army, took control of more territory inside the Harasta Industrial Area, forcing Jeish al-Islam militants to withdraw towards the Harasta Highway.

With approximately 65 percent of the Harasta Industrial Area under their control, the battle for the Harasta Highway will be crucial; thus far, the Syrian Air Force has relentlessly bombarded the militant group, as the Syrian forces are prepare for this integral fight.

The sources said that the Russian warplanes began their air attacks on the ISIL strongholds after their reconnaissance flights reportedly captured footage of a large training camp of the terrorist group inside the village of Kassra al-Sheikh, in the Northern Raqqa governorate.

The Russian fighter jets struck the ISIL training camp at Kassra al-Sheikh around 9:30 a.m. Monday, destroying the terrorist group’s camp before they turned their attention to the Tabaqa airbase.

In the meantime, the Russian warplanes conducted another air raid on the ISIL-stronghold of ‘Aqayrbat in the Hama governorate, where they struck a terrorist convoy on the road to the imperative city of al-Salamiyah.

The city of ‘Aqayrbat in the Hama governorate’s Eastern territories was relatively untouched before the Russian airstrikes this month.

Also, the Russian air force carried out seven more airstrikes against the ISIL positions in the Deir Hafer Plains of the Aleppo governorate; these airstrikes are specifically targeting the terrorist group along the Deir Hafer Highway that leads to the Kuweires airbase.

The Russian military said Sunday that the country’s air group in Syria is using Kh-29L air-to-surface missiles to conduct airstrikes against the ISIL militants.

“A Kh-29L surface-to-air missile is equipped with a semi-active laser guidance system. When the launch is conducted, a pilot illuminates a target with a laser sight. At the same time an aircraft can continue the flight,” Aerospace Forces Spokesman Colonel Igor Klimov said.

TEHRAN (FNA) – Military sources in Quneitra informed on Tuesday that the Syrian army and the Lebanese Hezbollah have taken a heavy toll from the terrorist groups and recaptured Tal-Ahmar hill in a major joint offensive in the Southwestern province.

The sources said that the Syrian soldiers stormed the positions of the militant groups in the nearby areas of Tal-Ahmar and retook full control over this strategic hilltop.

The sources further added that scores of the militant groups’ members were killed or wounded in the Tal-Ahmar liberation operation. Tal-Ahmar went under militants’ control only two days ago.

Meantime, the Syrian army and the Hezbollah Movement carried out another operations against the strongholds of the militant groups in Ayn al-Nuriyeh area in Quneitra province.

Elsewhere, Hezbollah fighters targeted a long convoy of the so-called Free Syrian Army’s (FSA) vehicles loaded with weapons and ammunitions near al-Hamidiyeh in Quneitra, killing and wounding tens of the FSA forces.

Reports said on Thursday that the Syrian army backed by the popular defense groups destroyed hideouts and vehicles of al-Nusra Front and other Takfiri terrorist groups in the Northern countryside of Quneitra.

The army targeted the Takfiris’ positions in military operations on Wednesday night and Thursday, reports said. A group of terrorists were killed and injured in the military operations against positions of al-Nusra Front and other terrorist groups in the villages of Jibbata al-Khashab and Tranjeh. One of the militants’ ammunition depots was also destroyed.

Meanwhile, the army destroyed three heavy machinegun-equipped vehicles belonging to al-Nusra terrorists, and killed all terrorists onboard in a military operation to the East of Tranjeh village.

The terrorist groups acknowledged on their social media pages that a number of their members were killed, including terrorist Shadi Yousef Sharaf.

TEHRAN (FNA) – Syrian government forces conducted military operations against the Takfiri militants in Aleppo province on Tuesday, killing a large group of the terrorists. The army killed the terrorists in Jib al-Safa, al-Lairamoun, Bani Zaid and in the vicinity of the Air Force Academy in Aleppo, informed sources said.

On Monday, Syria conducted airstrikes against ISIL terrorists in several areas in the Eastern countryside of Aleppo, leaving a large group of them dead. A military source said that the air raids destroyed terrorists’ hideouts and vehicles, some of which equipped with machineguns, in the villages of Ain al-Jamajima, Jeb al-Safa in Kweiris area, and in the towns of Deir-Hafer and Maskana.

The source added that the army targeted terrorists’ concentration centers in al-Bab city, leaving a large group of them dead.

Syria has been grappling with a deadly crisis since March 2011. The violence fuelled by Takfiri groups has so far claimed the lives of over 240,000 people, according to reports.

The ISIL terrorists have tried to take control of areas in Deir Ezzur province over the past month, but they have failed due to the resistance of the Syrian army and popular forces.

On Monday, the Syrian air force hit ISIL positions and movements in the Eastern countryside of Deir Ezzur. The Syrian fighter jets pounded the terrorists’ concentration centers in the villages of al-Mraeyeh, al-Jafrah and Hatlah, killing a group of ISIL terrorists and destroying their machinegun-equipped vehicles, weapons and ammunition.

On Saturday, the Syrian army troops killed over 150 ISIL terrorists in operations in Deir Ezzur province. The army clashed with the ISIL terrorists on the outskirts of the neighborhoods of al-Rasafa, al-Rashidyia, al-Ommal and al-Sina’a in Deir Ezzur city, inflicting heavy losses on them, field sources said.

The sources added that more than 150 ISIL terrorists were killed in the operations in Deir Ezzur and its countryside. A number of their vehicles with all the ammunition and machineguns on board were also destroyed.