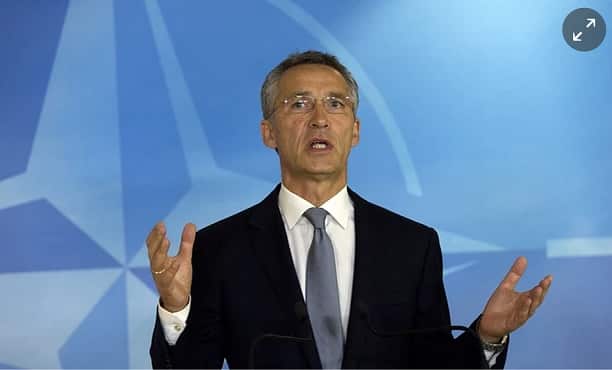 Nato is ready to send troops to Turkey to defend against threats on its southern flank, the head of the alliance has said following violations of Turkish airspace by Russian jets conducting airstrikes in Syria.

Moscow’s growing military involvement in the Syria conflict – which on Wednesday involved its jets backing an offensive by ground troops loyal to the president, Bashar al-Assad – is expected to be high on the agenda of a meeting of the alliance’s defence ministers.

“Nato is ready and able to defend all allies, including Turkey against any threats,” Jens Stoltenberg, the secretary general, told reporters before the Brussels meeting on Thursday.

“In Syria, we have seen a troubling escalation of Russian military activities. We will assess the latest developments and their implications for the security of the alliance. This is particularly relevant in view of the recent violations of Nato’s airspace by Russian aircraft.

“Nato has already responded by increasing our capacity, our ability, our preparedness to deploy forces including to the south, including in Turkey.”

The ground offensive backed by Russian airstrikes was an escalation in Moscow’s week-long campaign, which had previously been restricted to bombing runs to soften up rebel positions near major loyalist strongholds.

Syria’s chief-of-staff, Gen Ali Ayoub, on Thursday declared that a wide-ranging ground offensive by Syrian troops was under way that he said had been facilitated by Russian airstrikes.

The UK-based Syrian Observatory for Human Rights said ground forces loyal to the government targeted insurgents in the Ghab plain, with heavy barrages of surface-to-surface missiles as Russian warplanes bombed from above. It also said rebels had shot down a helicopter in Hama province in western Syria. It was unclear if it was Syrian or Russian.

The Ghab plain lies next to a mountain range that forms the heartland of Assad’s Alawite sect. Recapturing it from an alliance of rebel groups that includes al-Nusra Front, al-Qaida’s wing in Syria, would help secure Assad’s coastal heartlands and could provide a platform to drive the rebels back from other areas.

Most of Wednesday’s fighting appeared to be concentrated in Hama, a central province with a majority Sunni capital that has remained in the hands of the regime since the start of the war. It is key to Assad’s strategy of cementing control over major population centres in a strip of territory from Latakia, in the north, through to Homs, Hama and Damascus.

Russia launches missiles towards Syria from the Caspian Sea
Russia’s air campaign in Syria has caught the US and its allies on the back foot and alarmed Syria’s northern neighbour Turkey, which says its airspace has been repeatedly violated by Russian jets.

On Thursday, Recep Tayyip Erdoğan, the Turkish president, warned Russia that its military action in Syria is endangering trade ties. Erdoğan said Ankara could look elsewhere for gas supplies and cancel the construction of its first nuclear power plant, which is being built by Russia. Russia supplies 60% of Turkey’s gas needs.

On Wednesday, Turkey summoned Russia’s ambassador for the third time in four days over the reported airspace violations, which Nato has said appeared to be deliberate and were extremely dangerous.

Turkey said Syria-based missile systems harassed its warplanes on Tuesday while eight F-16 jets were on a patrol flight along the Syrian border. The Russian ministry of defence said it was continuing to consult with Turkey to ensure there would be no repetition of the incident.

The Syrian push on the ground is the first time Assad’s forces have coordinated with the Russian airforce in an attempt to seize lost territory from opposition forces, leading to some of the fiercest fighting in months in a civil war that has now lasted four and a half years and killed more than 250,000 people.

The assault mirrors the US strategy in northern Syria, where coalition planes bombed Isis positions to pave the way for their allies on the ground to advance against the militants. It also poses the question of how much territory the regime’s army, exhausted and depleted by the conflict, can seize from the rebels.
The US Department of State repeated accusations that a large majority of Russia’s military strikes in Syria have not been aimed at Isis or jihadis tied to al-Qaida, and have instead targeted the moderate Syrian opposition.

“Greater than 90% of the strikes that we’ve seen them take to date have not been against Isil [Isis] or al-Qaida-affiliated terrorists,” said a spokesman, John Kirby.

Speaking in Brussels, the US ambassador to Nato, Douglas Lute, said on Wednesday that Russia’s buildup in Syria now included a “considerable and growing” naval presence, long-range rockets and a battalion of ground troops backed by Moscow’s most modern tanks.

He said the Kremlin seemed to be intent on forging a new counter-coalition to the western-Gulf axis, bringing together the Russians, Iranians, Iraqis and Hezbollah behind Assad.

Moscow had managed a “quite impressive” military deployment over the past week to its Syrian naval base in Tartus and its army base in Latakia, Lute said.

“There is a considerable and growing Russian naval presence in the eastern Mediterranean, more than 10 ships now, which is a bit out of the ordinary,” he told a news briefing.

“The recent Russian reinforcements over the last week or so feature a battalion-size ground force … There is artillery, there are long-range rocket capabilities, there are air defence capabilities,” Lute said. A battalion is typically made up of about 1,000 soldiers.

A senior Turkish official said 18 Russian warships had passed through the Bosphorus strait at Istanbul en route to Moscow’s Syrian base, amid conflicting reports of Russian ground forces also being deployed.

Nato diplomats doubted the Russians were preparing any ground operations but were sure that they were training and equipping Assad ground forces and were active on the ground beyond their military bases.

“The Iranians are on the ground, but not the Russians yet,” said the Turkish official.

The Turkish official and Nato diplomats said the Russians had also deployed air-to-air fighter aircraft, which would not be used for bombing anti-Assad forces, but would engage in dogfights.