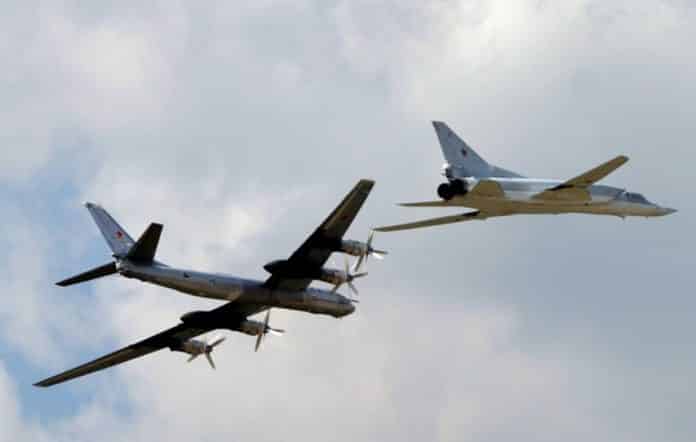 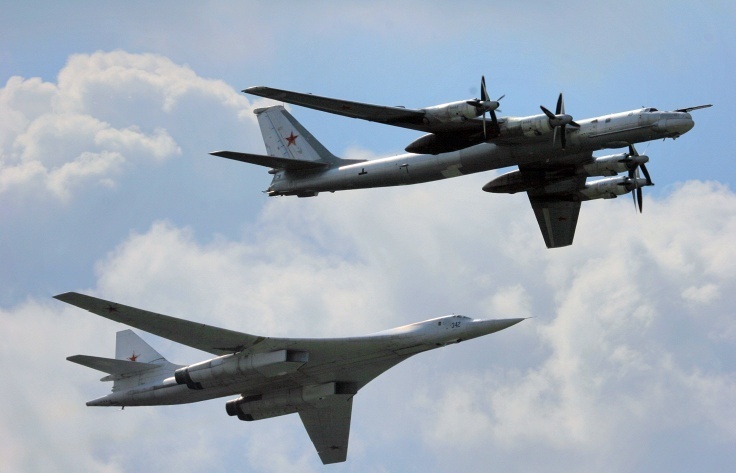 [ Editor’s Note:  VT has editorialized that the downing of the civilian airliner over the Sinai was intended to trigger an irrational response from Moscow. We said the desired response was unlikely to happen, and that instead, the Russians would seek retribution by pursuing the Syrian terror war with more military assets.

Today we find out we were right, with the deployment of Russia’s heavy bomber force; and by no means just one for show, as two waves of a dozen planes with huge bomb loads were deployed, where each bomb could zero in on a separate target. It was not a good day to be a Jihadi in Raqqah or Aleppo.

We can assume that these strikes are kicking off the final assault on the northern Syria strongholds. Thirty-four more bombers and fighters will be added to the Russian bases there. Watch to see if the newly recaptured Kweires Airport in Aleppo gets quickly converted into a forward air support base to conduct faster ground support missions in the big Aleppo battle to come.

Nothing raises the spirits of attacking infantry more than watching the heavy bombers go in and knowing they will have close air support. Russia is now building a lasting relationship with Syria, similar to what the US did with Europe during WWII, minus the ground troops.

And it cannot be an accident that the US and Turkey announced today that they are going to close the Turkish border with Syria.

We must assume this means traffic going both ways, showing that Turkey has agreed to cut off supplies to its terrorist groups of choice in the area, and that there will be no “official” back door open for retreat into Turkey.

This could create a free fire zone against those jihadis trying to cross the long border to retreat into Turkey. Could it be that the military strategy of “pushing jihadis out of an area” has finally been recognized as a fruitless one, as they just live to fight another day, only madder and meaner?

Will the plan now be to kill them where they are so they cannot return home to become commanders of new home grown terrorist units? It is too soon to know for sure, but this was one hell of a day for things moving in the right direction. May we see more in the coming weeks.

And last, we have to consider that the second Vienna meeting agreement to begin UN-sponsored negotiations between the Assad government and the accepted “opposition” groups in January played a key role here. I suspect that Moscow wants to go into the new year having crushed the ISIL and al-Nusra target list, which will undercut the US coalition members who have been supporting them — mainly Saudi Arabia and Qatar… Jim W. Dean ]

Russia has involved strategic and long-range aircraft in strikes against the Islamic State (IS) terrorist organization in Syria, Russian Defense Minister Sergey Shoigu reported to President Vladimir Putin on Tuesday.

“Today, in a period from 05:00 a.m. to 05:30 a.m. Moscow time, twelve Tu-22 bombers hit Islamic State targets in Raqqah; in a period from 09:00 a.m. to 09:40 a.m. Tu-160 and Tu-95MS strategic bombers fired 34 air-launched cruise missiles at terrorist targets in the provinces of Aleppo and Idlib. A total of 127 sorties against 206 terrorist targets were scheduled for Tuesday, of which 82 sorties have already been flown and 140 targets have been hit. The operation is underway,” he said. According to the minister, Russian aircraft have doubled the number of strikes against Islamic State facilities in Syria, which made it possible to cover all terrorist facilities in the country.

Earlier, Putin gave instructions to intensify strikes delivered by Russian aircraft in Syria after Federal Security Service (FSB) chief Alexander Bortnikov reported that the crash of Russia’s A321 airliner above the Sinai Peninsula on October 31 was caused by a terrorist act carried out with the help of a homemade explosive device.

The crash killed 224 people, which became the largest air crash in the history of domestic aviation. Following the tragedy, Russia suspended flights to Egypt.

Russia’s Chief of General Staff Valery Gerasimov told Vladimir Putin that Russia will use long-range planes in addition to bombers and fighter jets to deliver strikes on Islamic State targets in Syria.

“To fulfil your orders to intensify strikes against targets of the Islamic State and other extremist organizations, the General Staff has worked out a plan of further air operation. Along with the intensification of sorties from the Hmeymim airbase in Syria, the plan provides to involve an extra of 25 long-range planes, eight Sukhoi-34 bombers, four Sukhoi-27SM fighter jets,” he said.

The Russian aviation grouping at the moment comprises more than 50 aircraft and helicopters, including the Sukhoi Su-34 and Su-24M bombers, Su-25 attack aircraft, Su-30SM fighters and Mil Mi-8 and Mi-24 helicopters.

Squadron of Tu-22M3 bombers attacking IS targets in Syria

“A reinforced squadron of long-range bombers Tupolev-22M3 from the Mozdok airdrome over twenty four hours deals two massive strikes against the Islamic State in eastern Syria’s Deir ez-Zor and Raqqah provinces. One attack was carried out last night, and another is in progress at the moment,” he said.

Russia’s long-range planes have been attacking IS targets starting from Tuesday, November 17.

“In order to cope with the set tasks all types of air attack complexes are being used: strategic missile carrying bombers Tupolev-160 and Tupolev-95S and long-range bombers Tupolev-22M3. The crews of strategic bombers are performing their tasks in strict accordance with the plan for dealing the first massive air strike,” Zhikharev said.

The Tupolev-160 and Tyupolev-95MS planes have already returned to base upon completion of their combat missions. “The planes are undergoing maintenance and preparations for more sorties. Objective monitoring data are being analyzed,” he added.

Russia’s Aerospace Forces delivered over 4,000 strikes in Syria since start of operation

Russia’s Aerospace Forces grouping has delivered over 4,000 missile and bomb strikes against terrorist facilities since the start of its operation in Syria, Chief of the Russian General Staff Valery Gerasimov said on Tuesday. 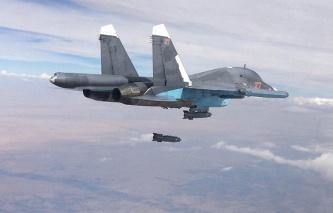 “Over the past 48 days, the Russian air grouping has performed 2,289 sorties and delivered 4,111 missile and bomb strikes against major infrastructure facilities and the concentrations of the militants’ armor and personnel,” he said.

“During the combat operations, 562 control points, 64 terrorist training camps, 64 arms and ammunition production facilities and other objectives have been destroyed,” the chief of the Russian General Staff said.

The Russian military started an operation against militants of the Islamic State and Jabhat al-Nusra terrorist groups (outlawed in Russia) in Syria on September 30 at the request of Syrian President Bashar al-Assad.

Besides, overnight to October 7, the Caspian Flotilla ships delivered a massive strike on the IS objectives in Syria, using Kalibr NK shipborne cruise missiles.

Russia has deployed its fleet of strategic bombers to double the volume of airstrikes on Islamist targets in Syria, Defense Minister Sergey Shoigu has announced. Vladimir Putin has ordered a cruiser to coordinate operations with French naval forces in the Mediterranean.

“We are conducting a mass airstrike campaign against Islamic State targets in Syria. We have now doubled the number of sorties, which is allowing us to conduct operations throughout the length and breadth of the country,” Defense Minister Sergey Shoigu said during a Security Council meeting in Moscow chaired by the Russian president.

Shoigu said that Russia’s Tu-95, Tu-22 and Tu-160 strategic bombers have been brought into the operation, while the Air Force command added that the strike group has been bolstered with 37 new planes, including Su-34 bombers and Su-27 fighter jets.

The head of the General Staff reported that the new phase of the anti-ISIS campaign will involve 25 long-range bombers flying out of airfields in Russia.

“By conducting military missions in Syria, you are protecting Russia and her citizens,” Putin told his military chiefs. “Our air campaign in Syria must not only be continued, it must be boosted, in such a way that the criminals are made aware that retribution is inevitable.”

The Russian president has issued orders for Russia’s Moskva cruiser, covering the Russian base in Latakia from the Mediterranean Sea, to work together with a French naval group led by flagship Charles De Gaulle, a 26 fighter-jet aircraft carrier, which is departing for Syria this week.

“The French naval group, led by the air carrier, will soon reach your area of operations. We need to establish direct contact with it, and treat it as an ally,” the Russian president said. “We need to develop of a joint action plan for both sea and air operations.”

The Kremlin said that the parameters for a joint mission had been agreed upon by Putin and French President Francois Hollande, following a personal phone call.

“The two leaders focused their attention on bilateral and multilateral cooperation in combating terrorism,” a Kremlin statement said. “This includes closer ties and joint operations between the military command and intelligence services of Russia and France in Syria.”

Vladimir Putin and Francois Hollande are to meet in Moscow on November 26.

The chief of Russia’s General Staff, Valery Gerasimov, reported that Russian forces have made nearly 2,300 sorties in 48 days since their deployment at the behest of Syrian President Bashar Assad. Gerasimov said that 26 cruise missiles had been launched from Russia’s Caspian Fleet, and ten space satellites had been involved in mapping target sites, including several that had been repurposed from civilian use.

“The work of Russia’s air force has enabled Syrian government forces to go on the offensive along the entire front in the regions of Aleppo, Latakia, Idlib, Homs and Damascus, freeing significant territories from terrorist control,” said Gerasimov, mentioning that in the province of Aleppo alone, 40 settlements have recently been liberated.