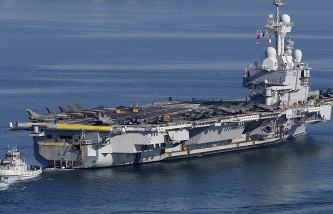 MOSCOW, November 18. /TASS/. Russian warplanes in Syria have begun hunting for Islamic State’s tanker trucks carrying crude oil and petroleum products, the chief of the main operations directorate of Russia’s General Staff, Colonel-General Andrey Kartapolov told a news briefing on Wednesday.”I would like to point out that a decision has been made to let Russian planes fly sorties to search for tanker trucks carrying petroleum products belonging to terrorists in areas controlled by the organization calling itself the Islamic State (outlawed in Russia),” Kartapolov said.According to the official, Russian warplanes have destroyed about 500 fuel tank trucks that were illegally transporting oil from Syria to Iraq for refining.

“Over the past years, the Islamic State and other extremist groupings have streamlined the operations of the so-called ‘pipeline on the road’ in the areas under their control,” Gen Kartapolov said.

Hundreds of fuel tank trucks are delivering thousands of tons of crude oil for refining to Iraq and the fuel they sell then is one of the main sources of their financing.

Reporters at the briefing were shown the photos showing hundreds of fuel tank trucks form a column.

“In the first several days alone, our warplanes destroyed about 500 fuel tank trucks,” Gen Kartapolov said. “This has considerably cut down the militants’ capability for an illegal export of energy resources and, consequently, for getting the revenues for the contraband.”

Russian officials have repeatedly called to implement the UN Security Council resolution that was passed upon Russia’s initiative, on preventing the financing of terrorism. However, the Russian Foreign Ministry has admitted that the efforts to disrupt financing of terrorist activity in the Middle East depend on some countries’ good conscience.

“UN Security Council Resolution 2199 [on combatting financing of terrorist organizations through their illegal trade in oil and oil products] has set a mechanism of submitting reports on the implementation of its provisions. So far, the mechanism has not started to work in full. Amid the persisting problem acuteness, this causes serious concern,” spokesperson for Russia’s Foreign Ministry Maria Zakharova said in late October.

Russian President Vladimir Putin on Monday said that he had told his G20 colleagues what he knew about channels of financial support for terrorists.

“I discussed it with my colleagues. I hope that we will continue this work which is extremely important for fighting terrorism,” Putin told a briefing on results of the G20 summit.

“As we have established, financing comes from 40 countries, including some countries members of G20,” he told reporters, adding that this issue had been discussed at the G20 summit in the Turkish Antalya.

“We discussed the necessity for the implementation of the UN Security Council resolution that was passed upon Russia’s initiative, on preventing the financing of terrorism and on preventing illegal trade in pieces of art that terrorists plunder in the territories they seize,” the Russian leader said.

He said G20 leaders had also discussed ways to prevent illegal oil trade and income generation from that.

“Moreover, I even showed our colleagues our images taken from space and planes which clearly show the scope that illegal trade in oil and oil products acquires: convoys of fuel transporters stretching by dozens of kilometers,” Putin said.

“Of course, we discussed that issue with colleagues, and I hope we will continue this work that in my opinion is extremely important for anti-terrorism fight,” the Russian leader added.