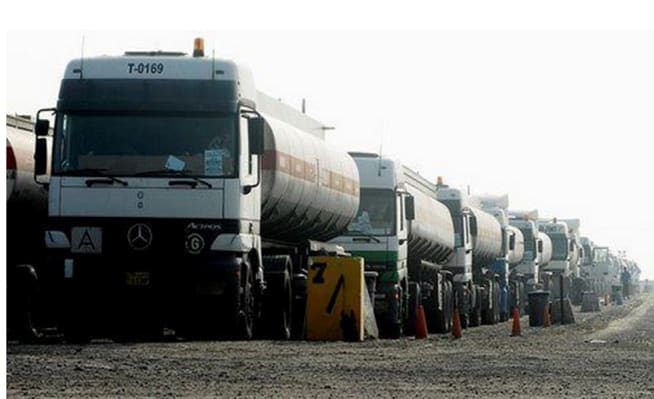 …by Gordon Duff, Senior Editor
Over the last two weeks, Russia has been destroying the “living pipeline” that has allowed Turkey to steal tens of millions of barrels of Syrian crude oil, much of it at peak market prices, while only paying their ISIS allies a pittance.
This process isn’t new.  Turkey did this all during the Bush era, having cut a deal with US “manager” Paul Bremmer, a deal VT insiders helped manage for Bremmer and that I was witness to personally.
The game involved playing Baghdad against Erbil and bleeding off oil revenues from the Kirkuk Oil Fields, largest oil reserves in the world, as they moved by pipeline through Kurdistan and into Turkey.  There they were offloaded onto American tankers in the Mediterranean where these huge ships, largest in the world, were filled with oil but it was never recorded and the oil never paid for.
Turkey got their cut, certain Turkish naval officers became fabulously wealthy while the Bush cabal poured billions into their Cayman offshore accounts managed by Bain Capital.
During the Bush era “War on Terror,” up to 40% of Iraqi crude oil, up to half of what was sent through Turkey on the Baku-Ceyhan pipeline was stolen.  Our investigations between 2005-7 which included meetings between Gordon Duff and Iraqi and Kurdish leaders in both Erbil and Tikrit covered this issue.
VT sources within the Turkish Navy at Ceyhan, Turkey,  reported Exxon tankers loading up to 2 million barrels of Kirkuk light sweet crude oil at a time did so “off the record.”
Inside Iraq, VT editor Alex Powers, who helped oversee Iraqi oil sales and production for Paul Bremmer, confirmed these findings.

Russian reconnaissance footage have shown oil is being smuggled through ISIS-held areas in Syria into Turkey day and night. There are vehicles carrying oil, lined up in a chain going beyond the horizon.

Vladimir Putin accused Turkey of allowing ISIS Terrorists to run a “living oil pipe” across its border as he upped the ante in the row over the downing of a Russian jet.

The Russian President said that reconnaissance footage, shared with world leaders at the G20 summit earlier this month, showed that oil was being smuggled through terrorist-held areas in Syria into Turkey “day and night”. There were “vehicles, carrying oil, lined up in a chain going beyond the horizon”, he claimed.

Speaking after talks at the Kremlin with the French President Francois Hollande, Putin accused Ankara of false naivety over ISIS’s huge oil operation. “Let’s assume that Turkey’s political leadership knows nothing about it – it’s theoretically possible, albeit hard to believe,” he said. “There may be elements of corruption and insider deals. They should deal with it.”

Putin has gone for the jugular after the Turkish military shot down the Russian SU-24 jet after accusing it of violating its airspace during an operation in northern Syria. The incident is thought to be the first time in 50 years that a NATO member has downed a Russian plane.

Turkey is acutely sensitive to claims that it is turning a blind eye to ISIS, a view held not only by Russia but also by Western states who believe that Turkey has not done enough to prevent terrorists from slipping across its 500-mile border with Syria; timesofindia.indiatimes.com reported.