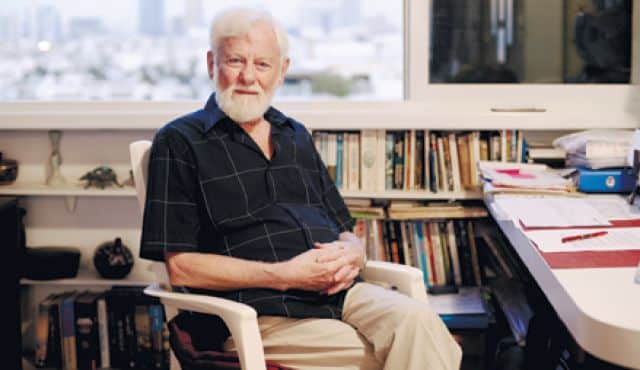 … by Uri Avnery, with Gush Shalom

[ Editor’s Note:  Uri is at his best when on his Don Quixote horse and taking on all comers. And I like his spunk about going where others fear to tread. But he has made a big point below in the overreaction to the so-called wave of terrorism in Europe, particularly where the hunt for one man had Belgium on lockdown for days.

The reaction was right out of “the sky is falling” and “the end of the world is upon us.” And no, I am not being flippant about the tragic losses for those killed and wounded, but backing Uri’s point that the EU has seen terrorism on a much larger scale in Israel by Israelis, and in Syria against the Syrians.

Why? I would say that is dependent on feeling no sympathy with the victims, or wanting to preserve some political or economic interest with the terrorists themselves. The examples are many — like France and Britain tripping over themselves to sell arms to the Saudis and anyone else, regardless of their record on state-sponsored terrorism.

And even the Iranians who have suffered so much with 17,000 victims — when it comes to criticizing Turkey’s support for al-Nusra and ISIL, Iran’s critical economic interests with Turkey have trumped its concern for the ISIL jihadis killing Iranian Republican Guard in the Syrian Army.

State powers have never been angels, and never will be… so we must pick the least treacherous among them to support in the current controversies. Hollande has shamefully used the Paris attack to ride his ratings out of basement, as others are trying to do — a sordid act repeated all throughout history, and I see no end in sight… Jim W. Dean ]

We would laugh at somebody who declares war on “international artillery”. A cannon belongs to an army, and serves the aims of that army. The cannon of one side fire against the cannon of the other.

Terrorism is a method of operation. It is often used by oppressed peoples,  including the French Resistance to the Nazis in WW II.  We would laugh at anyone who declared war on “international resistance”.

Terrorism means, literally, to frighten the victims into surrendering to the will of the terrorist.

Terrorism is a weapon. Generally it is the weapon of the weak. Of those who have no atom bombs, like the ones which were dropped on Hiroshima and Nagasaki, which terrorized the Japanese into surrender. Or the aircraft which destroyed Dresden in the (vain) attempt to frighten the Germans into giving up.

Since most of the groups and countries using terrorism have different aims, often contradicting each other, there is nothing “international” about it. Each terrorist campaign has a character of its own. Not to mention the fact that nobody considers himself (or herself) a terrorist, but rather a fighter for God, Freedom or Whatever.

I cannot restrain myself from boasting that long ago I invented the formula: “One man’s terrorist is the other man’s freedom fighter”.

Many ordinary Israelis felt deep satisfaction after the Paris events. “Now those bloody Europeans feel for once what we feel all the time!”

Binyamin Netanyahu, a diminutive thinker but a brilliant salesman, has hit on the idea of inventing a direct link between jihadist terrorism in Europe and Palestinian terrorism in Israel and the occupied territories.

It is a stroke of genius: if they are one and the same, knife-wielding Palestinian teenagers and Belgian devotees of ISIS, then there is no Israeli-Palestinian problem, no occupation, no settlements. Just Muslim fanaticism. (Ignoring, by the way, the many Christian Arabs in the secular Palestinian “terrorist” organizations.)

This has nothing to do with reality. Palestinians who want to fight and die for Allah go to Syria. Palestinians – both religious and secular – who shoot, knife or run over Israeli soldiers and civilians these days want freedom from the occupation and a state of their own.

This is such an obvious fact that even a person with the limited IQ of our present cabinet ministers could grasp it. But if they did, they would have to face very unpleasant choices concerning the Israeli-Palestinian conflict.

So let’s stick to the comfortable conclusion: they kill us because they are born terrorists, because they want to meet the promised 72 virgins in paradise, because they are anti-Semites. So, as Netanyahu happily forecasts, we shall “live forever by our sword”.

Tragic as the results of each terrorist event may be, there is something absurd about the European reaction to recent events. The height of absurdiocy was reached in Brussels, when a lone terrorist on the run paralyzed an entire capital city for days without a single shot being fired. It was the ultimate success of terrorism in the most literal sense: using fear as a weapon.

It seems incredible that ten mediocre individuals, with a few primitive weapons, could cause world-wide panic. But it is a fact. Bolstered by the mass media, which thrive on such events, local terrorist acts turn themselves nowadays into world-wide threats. The modern media, by their very nature, are the terrorist’s best friend. Terror could not flourish without them.

The next best friend of the terrorist is the politician. It is almost impossible for a politician to resist the temptation to ride on the wave of panic. Panic creates “national unity”, the dream of every ruler. Panic creates the longing for a “strong leader”. This is a basic human instinct.

Francois Hollande is a typical example. A mediocre yet shrewd politician, he seized the opportunity to pose as a leader. “C’est la guerre!” he declared, and whipped up a national frenzy. Of course this is no “guerre”. Not World War III. Just a terrorist attack by a hidden enemy.

Indeed, one of the facts disclosed by these events is the incredible foolishness of the political leaders all around. They do not understand the challenge. They react to imagined threats and ignore the real ones. They do not know what to do. So they do what comes naturally: make speeches, convene meetings and bomb somebody (no matter who and what for).

Not understanding the malady, their remedy is worse than the disease itself. Bombing causes destruction, destruction creates new enemies who thirst for revenge. It is a direct collaboration with the terrorists.

It was a sad spectacle to see all these world leaders, the commanders of powerful nations, running around like mice in a maze, meeting, speechifying, uttering nonsensical statements, totally unable to deal with the crisis.

The problem is indeed far more complicated than simple minds would believe, because of an unusual fact: the enemy this time is not a nation, not a state, not even a real territory, but an undefined entity: an idea, a state of mind, a movement that does have a territorial base of sorts but is not a real state.

This is not a completely unprecedented phenomenon: more than a hundred years ago, the anarchist movement committed terrorist acts all over the place without having a territorial base at all. And 900 years ago a religious sect without a country, the Assassins (a corruption of the Arabic word for “hashish users”), terrorized the Muslim world.

I don’t know how to fight the Islamic State (or rather Non-State) effectively. I strongly believe that nobody knows. Certainly not the nincompoops who man (and woman) the various governments.

I am not sure that even a territorial invasion would destroy this phenomenon. But even such an invasion seems unlikely. The Coalition of the Unwilling put together by the US seems disinclined to put “boots on the ground”. The only forces who could try – the Iranians and the Syrian government army – are hated by the US and its local allies.

Indeed, if one is looking for an example of total disorientation, bordering on lunacy, it is the inability of the US and the European powers to choose between the Assad-Iran-Russia axis and the IS-Saudi-Sunni camp. Add the Turkish-Kurdish problem, the Russian-Turkish animosity and the Israeli-Palestinian conflict, and the picture is still far from complete.

For history-lovers, there is something fascinating about the reemergence of the centuries-old struggle between Russia and Turkey in this new setting. Geography trumps everything else, after all.

Israelis believe (as usual) that we can teach the world. We know terrorism. We know what to do. But do we?

For weeks now, Israelis have lived in a panic. For lack of a better name, it is called “the wave of terror”. Every day now, two, three, four youngsters, including 13-year-old children, attack Israelis with knives or run them over with cars, and are generally shot dead on the spot.

Our renowned army tries everything, including draconian reprisals against the families and collective punishment of villages, without avail.

These are individual acts, often quite spontaneous, and therefore it is well-nigh impossible to prevent them. It is not a military problem. The problem is political and psychological.

Netanyahu tries to ride this wave like Hollande and company. He cites the Holocaust (likening a 16-year old boy from Hebron to a hardened SS officer at Auschwitz) and talks endlessly about anti-Semitism.

All in order to obliterate one glaring fact: the occupation with its daily, indeed hourly and minutely, chicanery of the Palestinian population. Some government ministers don’t even hide anymore that the aim is to annex the West Bank and eventually drive out the Palestinian people from their homeland.

There is no direct connection between IS terrorism around the world and the Palestinian national struggle for statehood. But if they are not solved, in the end the problems will merge – and a far more powerful IS will unite the Muslim world, as Saladin once did, to confront us, the new Crusaders.

If I were a believer, I would whisper: God forbid.