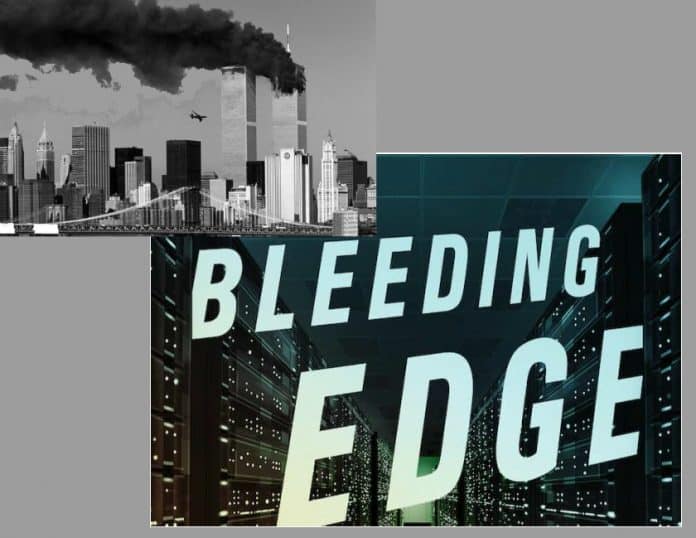 “If they can get you asking the wrong questions, they don’t have to worry about answers.” -Thomas Pynchon

I have been keeping an eye open for decent literary treatments of 9/11 truth, in case the Stupid Party ever rescinds their blacklist and allows me to return to teaching university; or, failing that, that I finally lose patience with the USA and find a job teaching American Studies in Tehran, Caracas, Moscow, Kuala Lumpur…some far-away place where the spirit of critical inquiry has not yet been pounded into complete oblivion.

Were I ever to land an Endowed Conspiracy Chair in an American Studies Department, which obviously will not happen – at least in the USA – until 9/11 truth experiences its definitive triumph (possibly several lifetimes hence) I would no doubt be required to teach the novels of Thomas Pynchon, that pope of postmodern paranoia and the closest thing America will ever have to its own James Joyce. Come to think of it, that would be a pretty sweet gig.

Pynchon’s latest novel, Bleeding Edge, does for 9/11 what Gravity’s Rainbow did for World War II: It suggestively depicts a mysterious, corrosive evil that is rotting the very fabric of our epistemology and even ontology, masquerading as a historical event that divides time into a before (bad enough) and an after (a whole lot worse, if it even exists at all).

But unlike Gravity’s Rainbow, which is notoriously difficult, Bleeding Edge  unfolds chronologically and engages viscerally and good-heartedly with characters and topical issues, making it unusually accessible for a Pynchon novel. Structured like a detective novel, Bleeding Edge will keep keep you turning the pages while occasionally reaching for the nearest search engine. (It’s amazing that so many readers even tried keep up with Pynchon’s arcane references back in the pre-internet era.)

So why isn’t this Pynchon’s first New York Times bestseller? The problem, at least for Stupid Party readers, is that the conspiracy theme in Bleeding Edge, unlike those in his earlier novels, hinges fairly straightforwardly (at least by Pynchon standards) on an all-too-real, all-too-obvious, and all-too-all-important historical crime: the false-flag atrocity of September 11th, 2001.

Previous Pynchonian masterpieces disguised their conspiracies as in a dream: the V conspiracy in V, and the Tristero private-post-office conspiracy of The Crying of Lot 49, were through-a-whole-lot-of-glasses-very-darkly versions of the kind of stuff Dan Brown writes middlebrow cash cows about; while Gravity’s Rainbow‘s suggestion that the 20th century world wars were conspiracies orchestrated by an aerospace conglomerate is a sort of dream-symbol amalgamation of the more mundane notion that banksters and (perhaps) rocket-scientists/extraterrestrials/death angels were responsible.

But there isn’t a whole lot of dream disguise to blur the fact that Bleeding Edge is about the 9/11 inside job. This has driven some mainstream reviewers into deep denial, while driving others berserk.

Over at that pathetic neocon rag known as The Wall Street Journal, where you would expect them to know their 9/11 put options from a hole in the ground, the reviewer angrily lambastes Bleeding Edge for “regurgitating 9/11 conspiracy theories,” all but calls Pynchon an anti-Semitic quasi-Nazi like Richard Wagner, ridicules the novel’s presentation of 9/11 truth issues including the put options and the psy-op term ‘Ground Zero,’ and finishes by snarling that Pynchon “brings nothing you couldn’t hear on ‘The Alex Jones Show.'”

Nothing you couldn’t hear on the Kevin Barrett show, maybe. But let’s face it, Pynchon is several shades of literary sophistication ahead of Alex Jones. Listen to him describe one of the usual suspects:

Windust does not after all seem to be FBI. Something worse, if possible. If there is a brother- or God forbid sisterhood of neoliberal terrorists, Windust has been in there from the jump, a field operative whose first recorded job, as an entry-level gofer, was in Santiago, Chile, on 11 September 1973, spotting for the planes that bombed the presidential palace and killed Salvador Allende.” (p. 108)

one of the founders of a D.C. think tank known as Toward America’s New Global Opportunities (TANGO).” (p. 108)

If the references to September 11th, neoliberal terrorists, and TANGO (a thinly-disguised reference to PNAC which called for a “New Pearl Harbor” one year before 9/11) haven’t tickled the needle of your 9/11-truth-o-meter, it needs a new battery.

There are plenty of memorable phrases and paragraphs in Bleeding Edge:

And how about this nod to to the 9/11 human sacrifice:

“Late capitalism is a pyramid racket on a global scale, the kind of pyramid you do a human sacrifice up on top of, meantime getting the suckers to believe its going to go on forever.” (p. 163)

Pynchon offers a tantalizing description of Fresh Kills Landfill right before 9/11 – the mobster-run dump where what little would be left of the pulverized, obliterated, explosively annihilated World Trade Center was subjected to what is called, in the legal world, destruction of evidence:

“The industrial racket from back in the marshland behind the giant cliffs of ruin has grown continuous. Now and then workers, in long-standing Sanitation Department tradition, have lengthy exhilarated screaming exchanges. “Strange shift to be working,” it seems to Maxine. “Yeah. Nice overtime for somebody. Almost like they’re up to something they don’t want anybody to know about.” “When did anybody ever want to know?”  March lapsing into the bag-lady character in her commencement speech at Kugelblitz, the one person dedicated to salvaging everything the city wants to deny. “Either they’re playing catch-up or they’re getting it ready to open for dump business again.” A presidential visit? Somebody’s making a movie? Who knows. (p. 169)

“. . . as if they already know what’s going to happen. This . . . event. They know, and they’re not going to do anything about it.” Is this all yet another exercise in freaking out the common folk so we’ll keep bleating and begging for protection? (p. 284)

And then there are those put options – the ones then-Rep. Dennis Kucinich promised a group of 9/11 truth leaders to launch a Congressional investigation of, and then his family members started dropping dead. He never got back to us. Listen to Pynchon:

The screen is full of numbers. “This is the Chicago Exchange, toward the end of last week, see? there was a sudden abnormal surge of put options on United Airlines. Thousands of puts, not a heck of a lot of calls. Now, today, the same thing happens for American Airlines. “A put?” Ziggy sez, “that’s like selling short?” “Yeah, when you’re expecting the stock price to go down. And trading volume meanwhile is way, way up – six times normal.” “Just those two airlines?” “Yep. Weird, huh?” “Insider trading,” it seems to Ziggy. (p. 315)

Pynchon’s truth-seeking bag lady character March lays it out for us:

Many of us need the comfort of a simple story line with Islamic villains, and co-enablers like the Newspaper of Record are delighted to help. Poor, poor America, why do these evil foreigners hate us, must be all this freedom of ours, and how twisted is that, to hate freedom? Really thinking about all those buildable lots where the demolition’s already been done. (p. 388)

And sums it up:

“After the 11 September attack,” March editorializes one morning, “amid all that chaos and confusion, a hole quietly opened up in American history, a vacuum of accountability, into which assets human and financial begin to vanish. Back in the days of hippie simplicity, people liked to blame ‘the CIA’ or a ‘secret rogue operation.’ But this is a new enemy, unnameable, locatable on no organization chart or budget line – who knows, maybe even the CIA’s scared of them.

“Maybe it’s unbeatable, maybe there are ways to fight back. What it may require is a dedicated cadre of warriors willing to sacrifice time, income, personal safety, a brother/sisterhood consecrated to an uncertain struggle that may extend over generations and, despite all, end in total defeat.”

But Bleeding Edge is more than a 9/11 truth novel. Its metaphor for ever-encroaching cyberspace, a circa-2001 “bleeding edge” virtual reality hidden within the internet and known as Deep Archer, represents the moment when we lost our way, the historical instant when the Society of the Spectacle loomed so large that any hope of separating reality from simulacrum began to look hopelessly quixotic. But maybe things have always been that way. There is an epistemological issue here that transcends particular historical events, even 9/11.

It was reality itself, not just America, that came down in the controlled demolitions of September 11th, 2001. And Pynchon, the American writer who has best tracked our ever-increasing unreality for decades, has responded with his most readable, entertaining, and disturbing novel.