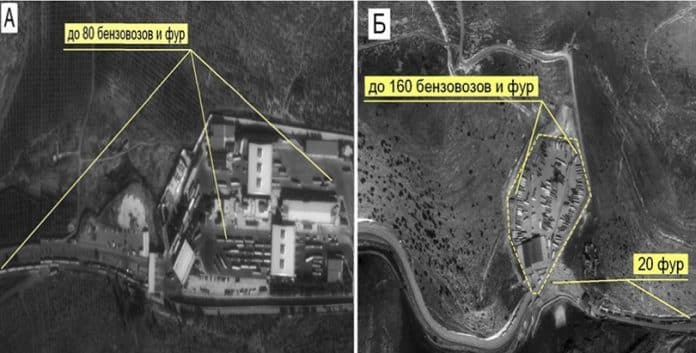 Turkey’s leadership, including President Erdogan and his family, is involved in illegal oil trade with Islamic State militants, says the Russian Defense Ministry, stressing that Turkey is the final destination for oil smuggled from Syria and Iraq.

The Russian Defense Ministry held a major briefing on new findings concerning IS funding in Moscow on Wednesday. According to Deputy Defense Minister Anatoly Antonov, Russia is aware of three main oil smuggling routes to Turkey.

The routes of alleged oil smuggling from Syria and Iraq to Turkey © syria.mil.ru

However, since the start of Russia’s anti-terrorist operation in Syria on September 30, the income of Islamic State (IS, formerly ISIS) militants from illegal oil smuggling has been significantly reduced, the ministry said.

“The income of this terrorist organization was about $3 million per day. After two months of Russian airstrikes their income was about $1.5 million a day,” Lieutenant-General Sergey Rudskoy said.

At the briefing the ministry presented photos of oil trucks, videos of airstrikes on IS oil storage facilities and maps detailing the movement of smuggled oil. More evidence is to be published on the ministry’s website in the coming says, Rudskoy said.

“These [airstrikes] helped reduce the trade of the oil illegally extracted on the Syrian territory by almost 50 percent.”

Up to 2,000 fighters, 120 tons of ammunition and 250 vehicles have been delivered to Islamic State and Al-Nusra militants from Turkish territory, chief of National Centre for State Defense Control Lt.Gen. Mikhail Mizintsev said.

“According to reliable intelligence reports, the Turkish side has been taking such actions for a long time and on a regular basis. And most importantly, it is not planning to stop them.”

“In total, in their illegal oil smuggling business, terrorists are using at least 8,500 trucks to transport up to 200,000 tons of oil every day.”

He added that the vehicles with illegal oil that are crossing Turkey are not checked at the border. 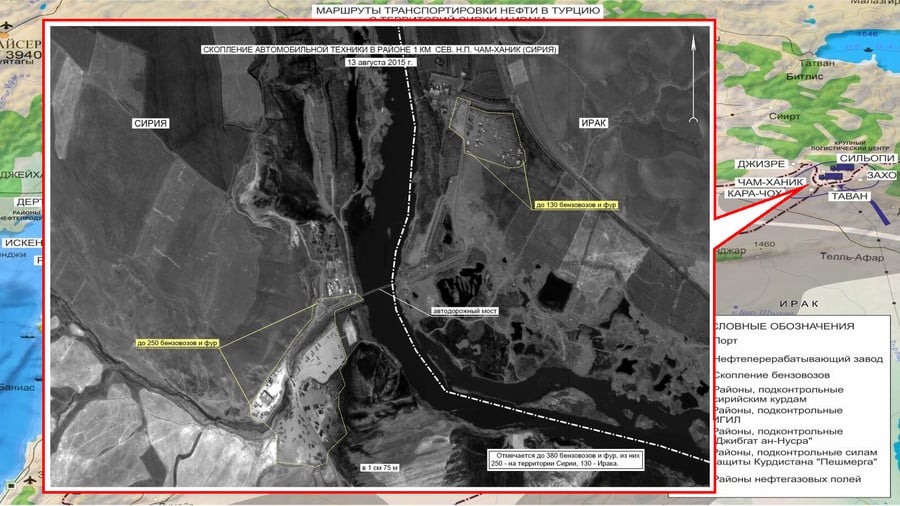 “The presented photos, which were taken this August, demonstrate hundreds of oil trucks and heavy vehicles moving both to and from the Turkish border.”

Rudskoy concluded that most of the oil is being transferred from eastern Syria to a large oil refinery plant in Batman, 100km from the Syrian border. 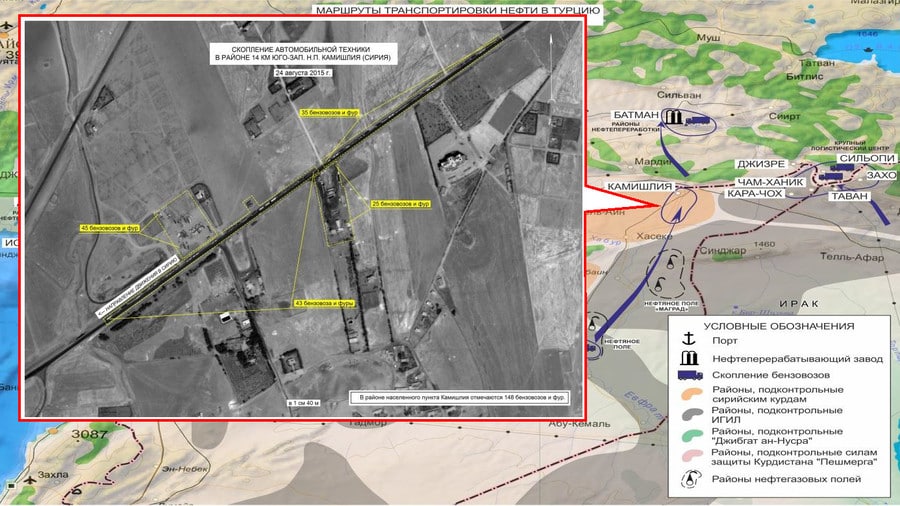 According to Rudskoy, Russia has identified “three main oil transportation routes from ISIS-controlled Syrian and Iraqi territories into Turkey.”

“The western route leads to the Mediterranean ports, the northern route leads to the Batman oil refinery on the Turkish territory and the eastern one leads to a large transfer base in Cizre [Turkey].” The documents published by the ministry show “the entire chain of oil supply into Turkey – from extraction to refining facilities.”