Home World The Breakup Between Turkey and Iran Begins, Predictably 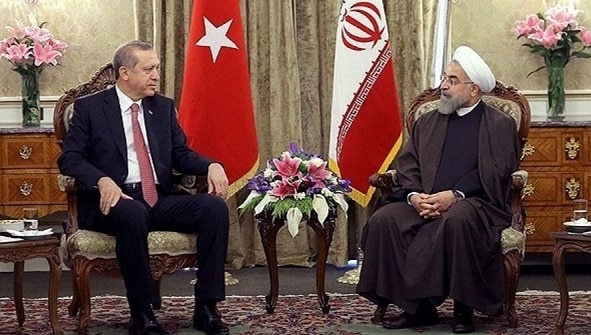 Jaber Ansari’s remarks came after the Turkish president claimed that he had warned his Iranian counterpart Hassan Rouhani to stop supporting Russia while accusing Turkey of engaging in oil trade with the ISIL terrorist group.

“Continuing pursuit of policies and adoption of stances that have willingly and unwillingly resulted in supporting terrorism in Syria and Iraq will only intensify present crisis in the region and also increase the problems of the countries that continue implementing such policies,” the Iranian foreign ministry spokesman said.

He reiterated that Iran welcomes change of such policies and companionship of all regional countries in the fight against terrorism and extremism, and said that Tehran is ready for cooperation and coordination with neighbors to achieve this goal.

On Thursday, an informed source categorically rejected President Erdogan’s claims that he had warned his Iranian counterpart to avoid repeating or supporting the Russian accusations about Turkey’s oil trade with the ISIL terrorist group.

Following Russian President Vladimir Putin’s accusations about Turkey’s oil trade with the ISIL, the Turkish president claimed that he has held talks with his Iranian counterpart, Hassan Rouhani, cautioning him to avoid repeating or throwing his weight behind the Russian accusations about Turkey’s close ties and purchase of Iraq’s and Syria’s stolen crude from the ISIL that has also involved members of his family, including his son and son-in-law.

“I have spoken to the Iranian president and warned them against partnering in Russia’s wrong accusations against Turkey,” Erdogan claimed, and continued, “It was from then on that such allegations were removed from the literature used by Iranian officials and certain news outlets (in Iran).”

In response, sources in the Iranian government on Thursday evening strongly denied Erdogan’s claim as “baseless” and “untrue”, and told FNA that “this claim is untrue and such issues have never been raised in any of the meetings or phone talks between Erdogan and Rouhani.”

Iran had long been complaining about ISIL’s oil deals with Turkey months before the Russian president raised the issue.

The Russian defense ministry announced on Wednesday that Erdogan and his family members are directly involved in illegal oil deliveries from ISIL oil fields in Syria.

Turkey’s leadership, including President Erdogan and his family, is involved in illegal oil trade with ISIL militants, the Russian Defense Ministry said, stressing that Turkey is the final destination for oil smuggled from Syria and Iraq.

In response, President Erdogan dramatically vowed to leave office if any proof is provided that Ankara has been buying oil from the terrorist group Daesh (ISIL).

At the briefing the ministry presented photos of oil trucks, videos of airstrikes on ISIL oil storage facilities and maps detailing the movement of smuggled oil. More evidence is to be published on the ministry’s website in the coming says, Rudskoy said.

He noted that over 120 oil tankers that were destroyed in the Russian airstrikes belonged to the Turkish Bayrak Company owned by Erdogan’s son-in-law who is also Turkey’s energy minister, Berat Al-Bayrak.

He noted that Bayrak Company has 500 oil tankers.

Pamir said that the deal between Turkey and the ISIL dates back to summer 2012 when the Takfiri terrorists took control of the city of Raqqa.

Meantime, a discontented nurse working clandestinely for a covert medical corps in Şanlıurfa—a city in Southeastern Turkey, close to the border with neighboring Syria — divulged information in July about the alleged role which Sümeyye Erdogan plays in providing extended medical care for ISIL wounded militants transferred to Turkish hospitals.

Turkey has never been shy of displaying its all-out support for militant groups in Syria, and now it seems that the war in Syria is largely indebted to the Erdogan family.

Turkey has allowed tens of thousands of militants to cross its borders with Syria in the last four years. The massive presence and trafficking of the terrorists along the two countries’ border roads has become the source of such ill fame for the region that they are now called as “Jihadi Superhighways” by the world.

According to the Russian Defense ministry’s data, over the past week up to 2,000 militants have traveled to Syria from Turkey.

“Up to 2,000 militants traveled from Turkey to Syria over the past week,” Chief of Russia’s National Center for State Defense Control Lt. Gen. Mikhail Mizintsev said on Wednesday.

“Just over the past week, up to 2,000 militants, over 120 tonnes of ammunition, and around 250 various vehicles were transported from Turkey to the ISIL and al-Nusra Front terrorist groups. According to our reliable intelligence information, such activities have been carried out for a long time and on a regular basis,” Mizintsev told reporters.