Home Military Russia Ready for Nuclear War with Invisible ‘Doomsday’ Plane in the Next... 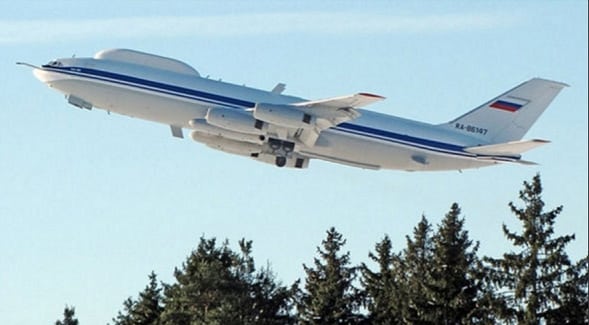 Vladimir Putin’s military superplane is designed to maintain full control over Russia’s armed forces in the event of a devastating conflict, Express reported.

Despite military experts saying the multimillion weapon will not be ready for operations until the end of 2015, it’s reported Mr Putin has ordered for it to be ready in just two weeks time as tensions flare between Russia and Turkey.

The plane will carry senior generals, officers and a crew of technicians, who will be scrambled, when bases on the ground are threatened.

Boasting improved function and survivability, the unit will be able to mastermind Russia’s offensive from the air as the generals on board order the army, navy, air and missile forces.

Russia and the US are the only two nations in the world who possess a weapon of this kind.

Aleksandr Komyakov, director general of the research and production enterprise which designed the equipment for the command center, says the Il-80’s main advantage is its “invincibility.”

He said: “While command installations with known ground positions could be eliminated, an airborne command post is a target hard to disable because it shifts continuously. The Americans call this type of aircraft “doomsday planes.”

He explained their main task is “establishing communications networks in extremely unfavourable circumstances – with ground infrastructure missing or destroyed.”

Efforts to get the super weapon ready come as Russia bombs more than 1,000 terrorist targets in Syria and accused Turkey of shooting down a Russian plane to hide turkish links ISIS’s illegal oil trade.

As tensions escalate in the Middle East, Russia blew up an oil tanker believed to be carrying oil belonging to ISIS as it was revealed Israel has been quietly testing ways of defeating Russia’s air defence system.

Putin has also deployed a super-weapon to Syrai in revenge for Tukey shooting down the Russian fighter jet.

An arsenal of S-400 anti-aircraft missiles have been stationed in Latakia, Syria in a bold statement by Mr Putin.

The anti-aircraft system pose a threat to both terrorists and coalition aircraft as only America’s most sophisticated stealth aircraft can evade the S-400’s radar.