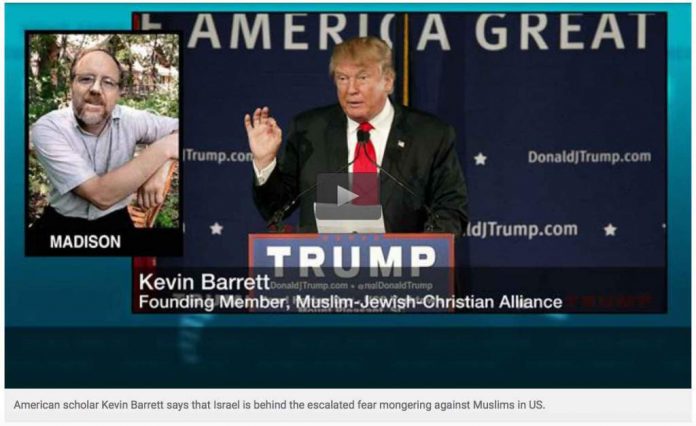 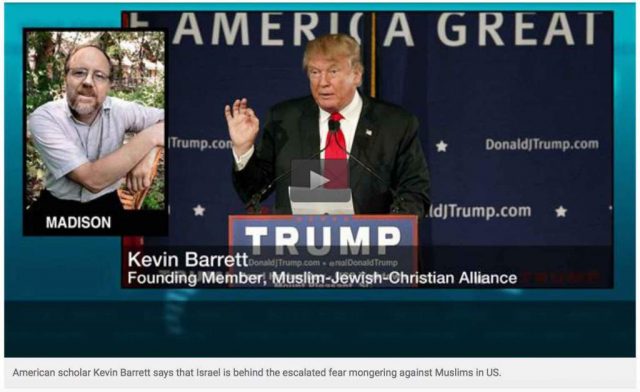 Israel is behind the so-called Islamic terror threat that has created panic among Americans in the wake of last week’s mass shooting in California, an American scholar says.

On Wednesday, Syed Rizwan Farook, 28, and Tashfeen Malik, 29, [allegedly] stormed a holiday party in San Bernardino, California, killing at least 14 people and injuring 21 in the deadliest mass shooting in the US in three years. [Yet witnesses report that three white paramilitaries carried out the shooting, and many other questions have been raised.]

In an interview with Press TV on Wednesday, Dr. Kevin Barrett called it a “false flag” which is being exploited by the likes of Republican presidential contender Donald Trump to demonize Muslims.

In response to the San Bernardino shooting, Trump called for “a total and complete shutdown of Muslims entering the United States” until American “representatives can figure out what is going on.”

Despite initial witness accounts that described the assailants as three tall white armed men, it was later announced that a “radicalized” Muslim couple, alleged Daesh followers, carried out the attack.

“Donald Trump is making all kinds of headlines by taking the neoconservative talking points and blowing them up to grotesque proportions,” Dr. Barrett said.

“Trump is now beating on the drums of Islamophobia in such an extreme way that he is raising huge alarm bells among all sorts of people including even the neoconservatives who have created all of this Islamophobia by repeatedly staging these false flag terror attacks,” he added.

Barrett, an editor at Veterans Today , noted that the 1993 bombing of the World Trade Center marked the beginning of a trend, where al-Qaeda was introduced as a  “plausible patsy” who would later be blamed for the September 11, 2001 attacks in New York which was also a “Zionist-neocon inside job.”

“Since 9/11 we have had a series of Zionist-neoconservative false flag attack staged by intelligence agencies linked to the Israeli Mossad, murdering large number of people and all of these have been falsely blamed on ‘radical Muslims’,” the analyst said.

“So this wave of propaganda designed by [Israeli Prime Minister] Netanyahu and his American assets has now created an atmosphere of extreme Islamophobia, even though the average American is more than 10 times more likely to drown in his or her bathtub or be hit by lightening than to die in any kind of terror attack,” he added.

“The idea that there is a radical Muslim terror threat is a complete hoax, there is no such threat,” Dr. Barrett continued. “It has been invented by the enemies of Islam.”

The American scholar said “neoconservative Zionists” such as Netanyahu, former Vice President Dick Cheney, and ex-president of the World Bank Paul Wolfowitz are the real people that have been “mass murdering” American people.

“It will be interesting to see if the Western governments can continue to allow these false flag hoaxes to stoke public fears about a non-existent Islamic terror threat or on the other hand, we will actually see some justice,” he concluded.