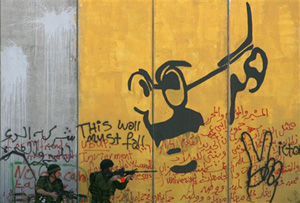 An unprecedented Israeli campaign to silence dissidents, intellectuals and human rights organizations is gaining momentum in the wake of Israel’s December 2008 assault against Gaza that caused intense international outrage at the rightwing government in Israel such that the country has consolidated its status as a militaristic, pariah state.

Chris Hedges, former foreign correspondent for the New York Times and senior fellow at the Nation Institute, has a new piece out detailing developments as Israel attempts to cover up its crimes against humanity in Gaza by expelling and blocking the entrance of peace activists and foreign nationals from the Palestinian territories, including the venerable Israeli human rights organizations—B’Tselem, the New Israel Fund (NIF) and the Association for Civil Rights in Israel.

The question is now unavoidable: Can Americans, Jews the world-over and all persons dedicated to human rights and international law continue to support this militaristic country engaged in Gestapo tactics, occupations, and massacres of defenseless civilians?

The Israeli government, its brutal war crimes in Gaza exposed in detail in the U.N. report by Justice Richard Goldstone, has implemented a series of draconian measures to silence and discredit dissidents, leading intellectuals and human rights organizations inside and outside Israel that are accused—often falsely—of assisting Goldstone’s U.N. investigators. The government of Benjamin Netanyahu is attempting to shut down Israel’s premier human rights organizations, including B’Tselem, the New Israel Fund (NIF) and the Association for Civil Rights in Israel. It is busy expelling or excluding peace activists and foreign nationals from the Palestinian territories. The campaign, if left unchecked, will be as catastrophic for Palestinians as it will be for Israel.

The Goldstone report, which is over 500 pages, investigated Israel’s 22-day air and ground assault on Gaza that took place from Dec. 27, 2008, to Jan. 18, 2009. The United Nations and the European Parliament have endorsed the report. The report found that Israel used disproportionate military force against Hamas militants in the Gaza Strip while failing to take adequate precautions to protect the civilian population against the military assault. The Israeli attack killed 1,434 people, including 960 civilians, according to the Palestinian Center for Human Rights. More than 6,000 homes were destroyed or damaged, leaving behind some $3 billion in destruction in one of the poorest areas on Earth. No Israelis were killed by Hamas rockets fired into Israel during the assault. The report did not limit itself to the 22-day attack; rather, it went on to indict the occupation itself. It examines the beginning of the occupation and condemns Israel for the border closures, the blockade and for the wall or security barrier in the West Bank. It has two references to the right of return, investigates Israeli torture and criticizes the willful destruction of the Palestinian economy.
‘The impact of the Goldstone report is tremendous,’ the Middle East scholar Norman Finkelstein said when I reached him in New York. ‘It marks and catalyzes the breakup of the Diaspora Jewish support for Israel because Goldstone is the classical Diaspora Jew. He is a lawyer and upholder of human rights and a liberal. He has distinguished himself in the field of law and he is also a lover of Zion. He calls himself a Zionist. His mother was an activist in the Zionist movement. His daughter did aliyah. He sits on the board of governors of the Hebrew University in Jerusalem. He has an honorary degree from the Hebrew University in Jerusalem. He has said over and over again that he is a Zionist. He believes Jews have a right to a state in Palestine. His is a mostly emblematic profile of the classically liberal Jew.’

‘Liberalhas a distinct connotation,’ Finkelstein went on. ‘It means to believe in the rule of law. It means to believe in international institutions. It means to believe in human rights. Amnesty International and Human Rights Watch are liberal organizations. What the Goldstone phenomenon registers and catalyzes is the fact that it is impossible to reconcile liberal convictions with Israel’s conduct; too much is now known about the history of the conflict and the human rights record and the so-called peace process. It is impossible to be both liberal and defend Israeli policy. That was the conflict that confronted Goldstone. I very much doubt he wanted to condemn Israel.’

‘Israeli liberalism always had a function in Israeli society,’ said Finkelstein, whose new book, ‘This Time We Went Too Far,’ examines the Israeli attack a year ago on Gaza. ‘When I talk about liberals I mean people like A.B. Yehoshua, David Grossman and Amos Oz. Their function was to issue these anguished criticisms of Israel which not only extenuated Israeli crimes but exalted Israeli crimes. ‘Isn’t it beautiful, the Israeli soul, how it is anguished over what it has done.’ It is the classic case of having your cake and eating it. Not only were any crimes being committed extenuated, but they were beautiful. And now something strange happened. Along comes a Jewish liberal and he says, ‘Spare me your tears. I am only interested in the law.’ ’

‘Goldstone did not perform the role of the Jewish liberal,’ Finkelstein said, ‘which is to be anguished, but no consequences. And all of a sudden Israeli liberal Jews are discovering, hey, there are consequences for committing war crimes. You don’t just get to walk into the sunset and look beautiful. They can’t believe it. They are genuinely shocked. ‘Aren’t our tears consequences enough?’ Aren’t our long eyes and broken hearts consequences enough?’ ‘No,’ he said, ‘you have to go to the criminal court.’ ’

The campaign against Israeli dissidents has taken the form of venomous denunciations of activists and jurists, including Justice Goldstone. It includes a bill before the Israeli parliament, the Knesset, which will make it possible to imprison the leaders of Israeli human rights groups if they fail to comply with crippling new registration conditions. Human rights activists from outside Israel who work in the Palestinian territories are being rounded up and deported. The government is refusing to issue work visas to employees of 150 NGOs operating in the West Bank and East Jerusalem, including Oxfam, Save the Children and Médecins Sans Frontières (Doctors Without Borders). The new tourist visas effectively bar these employees from Palestinian territory under Israeli occupation. Professor Naomi Chazan, the Israeli head of the NIF, which has donors in the United States, is being publicly vilified by ultranationalist groups such as Im Tirzu.  Foreign donors to the NIF, as well as other human rights groups, are being pressured by Israeli officials to halt contributions. Billboards have sprouted up around Tel Aviv and Jerusalem with a grotesque caricature of Chazan, who has been branded by groups such as Im Tirzu as an agent for Hamas and Iran, with a horn growing from her forehead. ‘Naomi-Goldstone-Chazan’ the caption on the billboard reads. Im Tirzu, the front organization behind many of the attacks, includes among its financial backers the John Hagee Ministries and the New York Central Fund, which also support extremist settler organizations.

The purge is under way because of the belief within the Netanyahu government that these groups and activists provided evidence of Israeli war crimes in Gaza to Justice Goldstone. Israel has no intention of lifting the blockade on Gaza, halting settlement expansion, including the 1,600 new homes to be built in East Jerusalem, or reversing its division of the West Bank into impoverished ghettos of Palestinians. The growing brutality and violence of the occupation, no longer easy to deny or hide, coupled with Israel’s growing status as an international pariah, have unleashed a crackdown against all those within the Jewish state who are blamed for the bad publicity. Yuli Edelstein, the Diaspora affairs minister, summed up the witch hunt when he announced that the Cabinet had been ‘concerned for a time with a number of groups under the guise of NGOs that are funded by foreign agents.’

The Knesset bill, if passed, will force human rights groups to register as political bodies and turn over identification numbers and addresses of all members to the government. These groups will lose their tax-exempt status. Most governmental organizations, such as the European Union, which is a large donor to Israeli human rights organizations, cannot legally pay taxes to another government, and the new law will effectively end European Union and other outside funding. The groups will be mandated to provide the government with the records of all foreign donations and account for how these donations were spent. Any public statement, event or speech, even if it lasts half a minute, by these groups must include a declaration that they are being supported and funded by a foreign power. Those who fail to follow these guidelines, including local volunteers, can face a year in jail.

There is a growing disenchantment among Israelis with the endless occupation of Gaza and the West Bank as well as endemic government corruption. Maj. Gen. Avi Zamir, the head of the Israeli military’s Personnel Directorate, admitted recently to UPI that increasing numbers of Israelis are refusing to serve in the occupied territories. ‘Taking into consideration Israeli Arab youth, we’re facing a situation in which 70 percent of youths will not enlist in the military,’ the general told the news agency. The discontent, along with the international condemnation, is inhibiting Israel’s ability to muster international support for further attacks.

The numbers of so-called refuseniks are proliferating with groups such as the Courage to Refuse, Shministim and New Profile supporting those who will not serve in the Israeli Defense Forces. It is not that many Israelis lack a conscience, it is not that many cannot delineate right from wrong; it is that the Netanyahu government is determined to see that these courageous voices within Israel will be silenced along with those of the Palestinians.