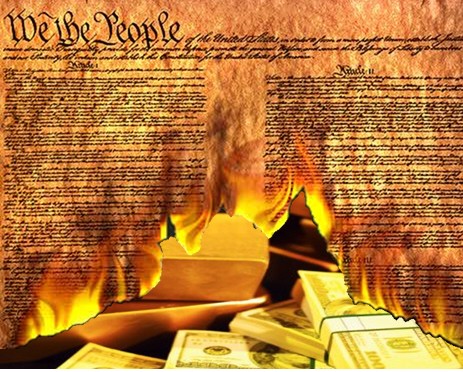 THE MOST UNPATRIOTIC ACT

By Susan Lindauer, STAFF WRITER and 9/11 Whistleblower indicted on the Patriot Act

I confess that since November I’ve been holding my breath, watching the clock for how long Tea Party newcomers could hold out against the entrenched Republican elite on Capitol Hill. Collapse was inevitable, however I admit to feeling bitterly surprised at how rapidly they have thrown in the towel.

For the record, most of the Tea Party quit their principles of liberty on February 14, 2011—20 days into the new Congress—when Tea Party leaders abruptly abandoned their opposition to the Patriot Act and voted to extend intrusive domestic surveillance, wire tapping and warrantless searches of American citizens. In so doing, they exposed the fraud of their soaring campaign promises to defend the liberty of ordinary Americans, and fight government intrusions on freedom. All those wide eyed speeches that flowed with such thrilling devotions, all of it proved to be self-aggrandizing lies.

The Tea Party didn’t even put up a fight. Briefly they rejected a sneak attack to renew three surveillance clauses of the Patriot Act on a suspension vote. That filled my heart with hope. One push from the Republican elite, however and they went down with a loud thud.

My disappointment is particularly acute. Rather notoriously, I am distinguished as the second non-Arab American to face indictment on the Patriot Act, after Jose Padilla.

My status was pretty close to an enemy non-combatant. One would presume that I must have joined some terrorist conspiracy? Or engaged in some brutal act of sedition, such as stock piling weapons and munitions to overthrow those crooks in Congress?

You would be wrong. I got indicted for protesting the War in Iraq. My crime was delivering a warm-hearted letter to my second cousin White House Chief of Staff, Andy Card, which correctly outlined the consequences of War. Suspiciously, I had been one of the very few Assets covering the Iraqi Embassy at the United Nations for seven years. Thus, I was personally acquainted with the truth about Pre-War Intelligence, which differs remarkably from the story invented by GOP leaders on Capitol Hill.

More dangerously still, my team gave advance warnings about the 9/11 attack and solicited Iraq’s cooperation after 9/11. In August 2001, at the urging of my CIA handler, I phoned Attorney General John Ashcroft’s private staff and the Office of Counter-Terrorism to ask for an “emergency broadcast alert” across all federal agencies, seeking any fragment of intelligence on airplane hijackings. My warning cited the World Trade Center as the identified target. Highly credible independent sources have confirmed that in August, 2001 I described the strike on the World Trade Center as “imminent,” with the potential for “mass casualties, possibly using a miniature thermonuclear device.”

Thanks to the Patriot Act, Americans have zero knowledge of those truths, though the 9/11 Community has zoomed close for years. Republican leaders invoked the Patriot Act to take me down 30 days after I approached the offices of Senator John McCain and Trent Lott, requesting to testify about Iraq’s cooperation with the 9/11 investigation and a comprehensive peace framework that would have achieved every U.S. and British objective without firing a shot. Ironically, because of the Patriot Act, my conversations with Senator Trent Lott’s staff got captured on wire taps, proving my story.

You see, contrary to rhetoric on Capitol Hill, the Patriot Act is first and foremost a weapon to bludgeon whistleblowers and political dissidents. Indeed, it has been singularly crafted for that purpose.

The American people are not nearly as frightened as they should be. Many Americans expect the Patriot Act to limit its surveillance to overseas communications. Yet while I was under indictment, Maryland State Police invoked the Patriot Act to wire tap activists tied to the Chesapeake Climate Action Network, an environmental group dedicated to wind power, solar energy and recycling. The DC Anti-War Network was targeted as a “white supremacist group.” Amnesty International and anti-death penalty activists got targeted for alleged “civil rights violations.”

All of these are American activists engaged in lawful disputes of government policy. All of them got victimized by the surveillance techniques approved by Tea Party leaders, because they pursued a policy agenda that contradicted current government policies. The Tea Party swore to defend the freedom of independent thinking in Congressional campaigns. One presumes those promises are now forgotten until the next election.

I cannot forget. I cannot forget how I was subjected to secret charges, secret evidence and secret grand jury testimony that denied my right to face my accusers or their accusations in open court, throughout five years of indictment. I cannot forget my imprisonment on a Texas military base for a year without a trial or evidentiary hearing.

I cannot forget how the FBI, the US Attorneys Office, the Bureau of Prisons and the main Justice office in Washington — independently and collectively verified my story— then falsified testimony to Chief Justice Michael Mukasey, denying our 9/11 warnings and my long-time status as a U.S. intelligence Asset, though my witnesses had aggressively confronted them. Apparently the Patriot Act allows the Justice Department to withhold corroborating evidence and testimony from the Court, if it is deemed “classified.”

I cannot forget threats of forcible drugging and indefinite detention up to 10 years, until I could be “cured” of believing what everybody wanted to deny— because it was damn inconvenient to politicians in Washington anxious to hold onto power.

Some things are unforgivable in a democracy. The Patriot Act would be right at the top of that list. Nobody who has supported that wretched law should ever be allowed to brag of defending liberty again. That goes for the Tea Party. By voting to extend surveillance of American citizens, they have abandoned the principles of freedom that brought about their rise to power. They have shown their true face.

It is a face that we, the people, will remember. I, for one, have no intention of allowing them to forget.

ABOUT THE AUTHOR:  Susan Lindauer is the author of EXTREME PREJUDICE: The Terrifying Story of the Patriot Act and the Cover Ups of 9/11 and Iraq.