FRIENDS IN WASHINGTON, LONDON AND TEL AVIV PARALYZE THE WEST

“Israel is flooding Libya with mercenaries, Gaddafi is slaughtering his own people and the rebel leaders who have called for help from America are being ignored while Gaddafi is consolidating for a full scale civil war which could easily have ended a week ago.”

This is the scenario being played out in Libya.  Gaddafi will be allowed to survive, weakened and muted, facing “elimination” at any time for “war crimes” now being carefully documented.  He will have to pay out billions to keep his business running, if, if he lasts.

The more things drag on and the more Libya’s “revolution” turns to “civil war,” the more it begs for intervention.  A week ago, it would have been a single strike, Gaddafi would have been gone and the rebels would build their own country, unfettered by intervention.  Anyone who doesn’t think there is a “casting call” out now, looking for a “Chalibi” for Libya, some expat with dirty hands and a long relationship with the CIA and Mossad, is a fool, a dangerous fool.

We seem to have plenty of them around, however.

Time is a danger.  The longer things in Libya drag on, the more likelihood of a bad outcome.

“DARK PROPAGANDA” AND “THE LEFT”

We saw it days ago when Libya’s propaganda began hitting the west.  They warned that American interference was another “Iraq.”  Soon afterward, the failed Neocons, Wolfowitz and Kristol, long discredited for their involvement in the WMD scam that led to the ill fated adventure in Iraq demanded intervention.

Wolfowitz and Kristol were dragged out as “strawmen,” better to use them than Cheney and Rove who are currently ducking war crimes prosecution.  What could better prevent the Obama administration from action than to have a policy endorsed by political enemies.

This “one-two punch” had an effect.  American “progressives,” a good many now totally addicted conspiratorialists jumped into the fray in opposition of American intervention to bring Gaddafi down. Their motivation?  Remember when George “W” Bush, the most unpopular president in American history had a 94% approval rate?

Who do you think feels a bit ashamed and embarrassed for being duped  by the WMD stories and the even more childish 9/11 myth of hijackers and box cutters?  With very few exceptions, then Senator Barak Hussein Obama being one of them, the progressive movement in America, the old line commies, the democrats, the unions, the imaginary “liberal” press, the whole “kit n’ caboodle” became Muslim hating war mongers.

Four years, five years later, longer for some, when Bush popularity polls, according to the “liberal press” were in the toilet, the armies of latter day activists jumped onboard the bandwagon.  Half had been “Limbaugh listening” and “right thinking” only months before.

Most would get out their flag and scream out their windows “kill the ragheads” whenever Israel and the CIA released those cartoonish bin Laden videos they made.

Now, this same group is being duped by Gaddafi, letting him spend his billions, hundreds of billions actually, to finance what may well turn into a bloodbath not unlike the one that went on when George H. W. Bush left Saddam Hussein in power after Operation Desert Storm.

He bought that forgiveness by giving out oil contracts to friends of American and British politicians and by opening his purse and buying anything he needed to in order to have the influence that would allow him to murder and torture for 42 years, now a “respectable” member of the world community.  Read;

“buying anything and anyone” 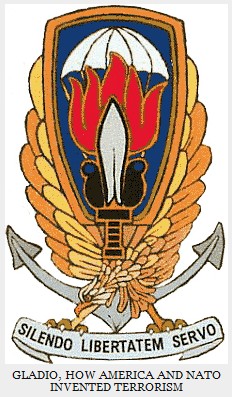 Until a few days ago, Gaddafi had the best reputation that money could buy and a string of politicians in his pockets that could reach from the Beltway to Whitehall.

“Bad boy” Gaddafi has long had warm and friendly relations with the west, the CIA and Israel in particular.  Most Americans remember President Reagan’s attack on Libya in 1986.  We may never know the real reasons for the move, whether Reagan was responding to Libya’s leanings toward the Soviets or as a reminder to rein in their massive WMD program which is said to have gone “nuclear” and possibly with some success, aided by Israel and South Africa.

Israel and South Africa, the Shah of Iran too, and, oh yes, the communists and, truth be stranger than fiction, the CIA, those were Gaddafi’s good friends.  He had good friends in Britain also, lots of them.

How can you do that and train and finance the IRA at the same time?

The answer requires some cynicism, something in generous supply lately.   Many Americans are addicted to cynicism, believing both political parties are “the same” or that Obama is Bush.  Obama certainly failed to jail Bush but the differences, domestic politics, economics and foreign policy are there and they are real differences.

If the media fails to report differences, do they still exist?  We wonder.

No Iraq war, no Afghanistan war, no economic crash, no depression and gas prices at $1.75 a gallon.  80 million Americans who are homeless, living with relatives or on the streets, dead or in prison would be employed, safe and paying taxes.

Ah, but I digress…

ISRAEL AND LIBYA, THE “AXIS OF EVIL DYNAMIC DUO”

One thing Operation Gladio should have taught us is that “false flag” terrorism is more than a reality, it is also “the rule,” not “the exception.”  “Gladio” was a NATO sponsored terror organization tasked with operating “resistance” cells in Western Europe in case the Eastern Bloc were to prevail in a Third World War.  Gladio cells were to blow up buses, trains, airports, disrupt society entirely, bringing economic life, public life too, to an end across Europe, Italy, Germany, France, Switzerland, Austria, Spain, every country of Europe, both NATO and unaligned.

A mature look at the Cold War looks more like two rats fighting over a corpse. Then, however, some saw it as “light and dark,” clear as that. Many believed the Soviet Union would drive its tanks through Europe like a knife through hot butter. To fight this “eventuality,” NATO built a terrorist organization of massive proportions. The remaining cells of Operation Gladio, one of the greatest disasters of military ignorance in history, are busy today.

We call some of them “Al Qaeda.”

Operation Gladio is the heart of world terrorism, alive and well, and built by NATO, built by the United States and used against America and the world. Gladio, created to save us from communism, quickly became a terrorist organization itself, murdering political leaders, rigging elections, terror attacks to blame on one group or another. The “medicine” became the disease. It is now killing us.

What does Libya have to do with this?  Libya was “ground zero” for Gladio support.  Gaddafi’s Libya, a military target America could have eliminated in hours at any time, sitting adjacent to the very seat of NATO power, was also a “strawman.”

Under Gladio, the IRA, Red Brigades and the endless precursors to what is now called “Al Qaeda,” were honed into a weapon, initially to be wielded by the CIA or their junior partner, Israel’s Mossad.

Today, many experts question as to which organization is the senior partner with most gravitating toward “Mossad.”

Either way, the methodology is the same, false flag terrorism to serve an agenda for “The New Century,”when “terrorism on demand” is supplied like any supermarket product, an attack in Mumbai, the London underground, an airport in Detroit, a new bin Laden “audio tape,” all tied to political races, oil price fixing or one of a hundred, a thousand financial schemes.

Where Israel supplied the planning, the “brain power” and the safe haven for international criminal elements, their partner, Libya, pretended to be the ever present “evildoer,” noisy, obnoxious, blustery but weak, vulnerable and, as we now learn, with a generous supply of friends in “low places.”

This kind of military operation is only possible because of a successful public relations campaign inside the US.  Libya’s assets?

Today’s deaths are, at least in part, on your hands.