WERE “MICRO-NUKES” IN ISRAELI AID PACKAGE TO GADDAFI?

“Editor’s note:  There have been “aggessive denials” and a number of orders to pull this story from “official sources.”  We are taking these as a confirmation.  Sources in Britain told us Sunday that SAS teams were investigating this incident and other potential WMD use.

“a massive explosion that completely destroyed an area three times the size of a soccer field…..photographers who arrived at the site of the explosion Saturday saw entire buildings, cars and trees flattened and smoldering as a result of the blast” Associated Press

Last nights  explosion at the Rajma military base outside Benghazi, Libya’s second largest city leveled blocks and left fire burning through the night.  Reports indicate an ammunition depot caused the blast but another, far more sinister cause is much more likely, a tactical nuclear weapon.

The use of such weapons, believed “unthinkable” by the public, may be much more common than believed. From VT;

What if someone could prove that the terrorist bombs, Oklahoma City, Beirut Marine Barracks, the Khobar Towers in Saudi Arabia, the Bali attacks and more, many more weren’t car and truck bombs at all, not the kind we were told, what then? Buildings thrown into the air like toys, mushroom clouds rise a dozen miles, explosions larger than anything known previously, many times larger than the biggest bomb, even larger than exploding munition ships from World War 2. These have happened over and over, been misreported in our news, nuclear attacks, new precision weapons that emulate conventional explosives.

Thus far, the bodies of 27 of the bases’s 40 staff have been recovered.  Damage cover’s, not only the base itself but extends to the residential neighborhood nearby where an even larger area was obliterated by the blast coinciding with Colonel Gaddafi’s move against Libyan freedom fighters in and around the city of Zawiya, 25 miles west of Libya’s capitol of Tripoli.  Zawiya fell to government forces yesterday though some opposition forces still hold out in parts of the city of 200,000, where fires are still burning. 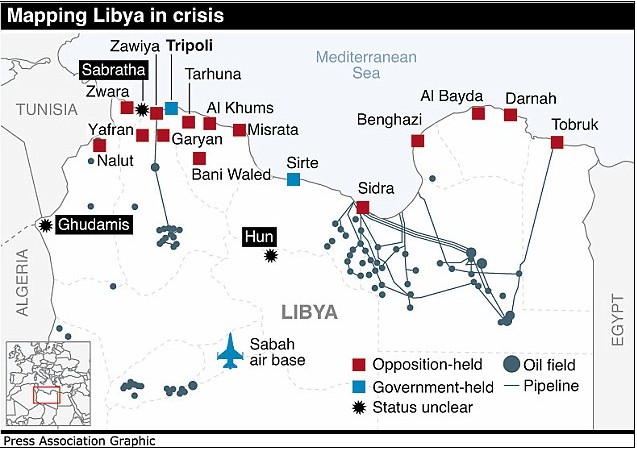 The rebels’ setback at the city of Zawiya, 30 miles (50 kilometers) west of Tripoli, was the second in as many days. A large arms and ammunition depot outside the city of Benghazi, the largest city in the rebel-held east of the country, blew up Friday in a massive explosion that completely destroyed .3 square kilometers.

This week, Bob Nichols, writing for VT, cited the ability to mask nuclear explosions, radiation, EMP and even seismographic signatures, particularly in newer weapons which include the highly secretive “4th generation” nuclear weapons.  Nichols, who writes on defense and nuclear weapons issues told this reporter:

“There have been breakthroughs we never hear about.  These programs went ‘dark’ years ago after a significant advance in physics.  Small nukes have been used in Iraq and Afghanistan and people are getting sick, not just locals but Americans as well.  These new weapons have little lingering radiation and can be easily hidden.”

In a related story,9/11 “first responder” Randy Wiebicke died March 3 after experimental stem cell treatments failed to stop the onset of multiple cancers and the total failure of his immune system.  The cause of death was listed as multiple 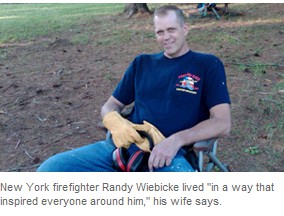 The “toxic” materials killing so many in Iraq and having sickened so many in New York are, as pointed out by former Soviet nuclear intelligence services officer, Dimitri Khalezov, is actually ionizing radiation from nuclear weapons.  Khalzov, while serving with the Soviet Army forces tasked with cataloging and overseeing all nuclear weapons use around the world describes briefings about demolition devices, thermonuclear bombs, that were planted under the World Trade Center, information that was shared with the Soviet Union in accordance with their treaty with the United States;

Israel went nuclear in the 1960s.  Libya’s leader, Colonel Gaddafi claims Israel had Kennedy murdered because he demanded they end their nuclear program.  Gaddafi, while speaking before the United Nations General Assembly said;

“Why did this Israeli kill the killer of Jack Kennedy? The whole world should know that Kennedy wanted to investigate the nuclear reactor of the Israeli demon”

Yet we find a convoluted history of “love/hate” between Gaddafi and Israel.  Libya and Israel have, for decades now, traded arms, WMD technologies, shared intelligence and even spied on America together as part of a consortium of rogue states whose membership has grown and shrunk over the years.  Iran, East Germany and Czechoslovakia were overthrown by revolutions.  Apartheid South Africa, another “rogue” friend, at one time a nuclear state.  It was South Africa’s nukes, built between 1975 and 1983, that created the first great “missing nuke” controversy, one that lasts till this day, one that may well have killed Dr. David Kelly and brought down British Prime Minister Tony Blair in the process;

There are nuclear weapons out there, maybe in terrorists hands, two or five, as many as seven or more. Iran and North Korea didn’t build them. North Korea’s nuclear program is a sham and Iran may simply be a scapegoat. Iran is not building nuclear weapons, they don’t possess the necessary centrifuges to enrich uranium. Using their available technology, a nuclear weapon could not be produced in a century.

However, the threat of nuclear terrorism is very real, the facts are there but America is sitting on the truth. Remember three names, Valerie Plame and Dr. David Kelly and Mordechai Vanunu. Plame was “burned” as an American spy, burned by the Bush administration. Vice President Cheney’s Chief of Staff, “Scooter” Libby (Liebowitz) was convicted of the crime but received a pardon from President Bush.

Plame wasn’t looking for “yellow cake” uranium from Niger, she was looking for lost nuclear weapons. When she got close, she was destroyed and then silenced by the Justice Department. Dr. David Kelly was a weapons scientist in Britain until his very unexpected suicide while trying to report wrongdoing tied to missing nuclear weapons, wrongdoing he attributed directly to Prime Minister Tony Blair. A secret investigation currently being conducted has ruled his death a murder and top members of government, from Blair downward are being grilled about, not only this, but missing nuclear weapons, a subject newspapers are being threatened to stay silent on daily.

Mordechai Vanunu is a nuclear weapons specialist who worked at the illegal Dimona facility in Israel. When he fled the country and alerted the world about the nuclear program there, he was kidnapped, returned to Israel and put in solitary confinement for 18 years. He has been under house arrest or in solitary confinement after his release. He is currently locked in a small cell in a secret prison in Israel for talking to someone not on his official list of contacts.

These three people and a number of people behind them hold the key to the biggest story in recent years, a massive worldwide coverup so frightening it is treated almost as though it was involved secret UFO landings. Not everyone has all the information. Some key figures are waiting for the results of the investigations going on in London now, the findings of which will be above top secret.

In March, 2004, after Iraq was mistakenly believed to have been “stabilized,” British Prime Minister Tony Blair flew to Tripoli for a “crash meeting” with Colonel Gaddafi to discuss “weapons of mass destruction.”(WMDs)  Libya had long been cited as having an advanced nuclear program and one of the largest biological and chemical warfare programs in the world.  In December, 1988, Pan American flight 103 crashed in Lockerbie, Scotland, killing 11 local residents in addition to the 243 passengers and 16 crew members.

Colonel Gaddafi had order the plane destroyed and had arranged for a bomb to be placed on the flight.  Blair would never mention this “minor issue.”  Instead, Blair returned with an oil contract and what was believed to be Libya’s promise to disarm.

Blair left Libya with an oil contract and an aircraft sale contract for BAE Systems.  Blair and Gaddafi have been close ever since.

Months before, in October 2003, America had seized advanced centrifuges capable of enriching uranium for nuclear weapons, centrifuges quite unlike those used in Iran.  Israel claims they helped the US stop the sale to Libya.  That is a lie.

Though reported as having been purchased from Pakistan through a Japanese company, the centrifuges were shipped from South Africa through an Israeli company.  In September 2004, South Africa arrested Israeli, Johann Meyer for arranging the sale.

In September 2004, South African authorities arrested Johan(sic) Meyer, president of TradeFin Engineering, and charged him with three criminal counts of trafficking sensitive nuclear equipment between November 2000 and 2001. Six days after his arrest, charges were dropped against Meyer, who apparently agreed to testify against two other parties in the scheme: Gerhard Wisser, the owner of Krisch Engineering, and its managing director, Daniel Geiges. The final indictment has been served against them, and in March 2007 prosecutors applied for the bulk of the case against them to be heard in camera, in order to prevent proliferation-sensitive information from entering the public domain.

A more honest and accurate telling of the story has Meyer escaping from custody with help from the French intelligence services.  Meyer is currently residing in the State of Israel.

The CIA cover story used to push blame on Pakistan and away from Israel was the “A.Q. Khan network.”

Dr. Khan is a Pakistani physicist who worked in their nuclear weapons program.  His identity was used, as part of a CIA sting operation, offering “nuclear triggers” in order investigate two possible scenarios.

With Israeli security companies openly operating inside Libya, in violation of UN sanctions, reportedly 50,000 “mercenaries” on the way to lead the crackdown on rebel forces, is there a chance that the covert arms relationship between Israel and Libya, alive and well and very “nuclear” in 2003, may be a factor in the recent “mishap?”