April is Confederate Memorial Month where various commemorations held throughout the month, primarily in the South. In the other states I would venture to say that most have never even heard of it, a combination performance of historical revisionism, political correctness, and amnesia. But I am happy to report that we are seeing more events being held each year and better attended.

The anti-Confederate smear campaign is becoming recognized for what it always was, a political campaign to denigrate Southern heritage. The ignorance of this was on the scale of your left arm not liking your right arm and then beginning a process of eventual amputation. But this would include a period of cigarette burning and razor slashing to get the process rolling.

The country is thankfully waking up from this silliness. VT has made an editorial decision to dig into more of these suppressed historical events, especially those involving veterans. It will keep us busy for the rest of our lives.

I have begun working on my main Confederate Memorial piece for VT focusing in on some of the archival gems and bombshells that most Americans know little or nothing about our War Between the States or War of Southern Independence.

Despite the huge number of books written over the years the really good stuff is protected like the gold at Fort Knox, especially when it comes to school curriculum. I did not really begin learning about how much history had been suppressed and censored until my mid forties. The journey has so far turned into an seemingly endless one.

But I wanted to get something up to get the educational ball rolling with a one issue piece.

The simplest item I always use to jerk the shorts up on a Confederate basher, especially a veteran, and even more so an officer, is to ask them it they knew that Confederate soldiers are officially American Veterans by Act of Congress.  They are usually stunned.

I then share with them the story below and then point out that when they think it is cute to bash Confederate soldiers they are making fools of themselves and embarrassing the Vet community as they are actually bashing all veterans. And if they can do it…then why not Vet haters.

I am happy to report that this sinks in very quickly with about 100% effectiveness. I follow up with a rundown on the disproportionate numbers that Southerners have contributed to all of America’s wars.

The front lines of our current military conflicts are filled with descendants of Confederate soldiers, many of whom are also descendants of Revolutionary War soldiers like myself.  See my earlier Sesquicentennial 150th Civil War anniversary article on just a few celebrity Confederate descendants.

But I must admit that finding the great piece below by Colonel Ed Kennedy made doing this easy. It is short and sweet, and covers the early history up through 1958 when the final act giving Confederates legal equality with Union veterans was passed.

Those of you who have Confederate ancestry, whether you are male of female, are eligible to be members of the Sons of Confederate Veterans or the United Daughters of the Confederacy. And of course a few folks might be eligible for both. I have been waiting for that gender lawsuit to happen, but the lawyers seem to have missed that one.

Ancestor denial had been epidemic in America but fortunately the Internet has made what was once a grueling process much easier.  SCV members are now doing DNA work to hook up with lost relatives, while others are finding fellow SCV men whose ancestors fought in the same unit as their Confederate ancestors. I am sure they are proud of the effort.

The process of discovering ourselves can be a rewarding one…most of the time. Professor Henry ‘Skip’ Gates of Harvard discovered that he was majority white, and seems to have adapted well. We met while shooting a segment for his PBS documentary ‘Looking for Lincoln’ and had a very interesting day.

The producers discovered in their research that the Sons of Confederate Veterans had never been formally included in any of the past productions on Lincoln and called us to inquire as to why. And of course the answer was that our perspective would refute the politically correct one, and so the sponsors preferred to leave us out.  Bottom line it was a question of getting funding, or not getting it.

This PBS production crew was different. The director was a gracious Belgian lady. She was real, a total professional, and looking for new material. PBS and brother Gates were our guests at the SCV annual Reunion in Concord, NC. It was, shall I say, a first time for everybody.

Prof. Gates left a different man after watching the the descendants of a black Confederate honored with a special presentation and standing ovation.  He had never heard the real story of these men  and thought they were a myth. His comment when leaving at the end of the day?… “Fellas, I was lied to?”

Enjoy this first Confederate Memorial Month cannon shot. More are on the way. 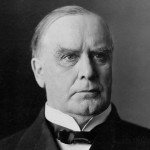 At the turn of the nineteenth and twentieth centuries, a move in the North was made to reconcile with Southerners. President McKinley was instrumental in this movement. When the Spanish-American War concluded successfully in December 1898, President McKinley used this as an opportunity to “mend the fences”.

On 14 December 1898 he gave a speech in which he urged reconciliation based on the outstanding service of Southerners during the recent war with Spain. Remember, as part of the conciliation, several former Confederate officers were commissioned as generals to include former Confederate cavalry general, Wheeler. This is what McKinley said:

“…every soldier’s grave made during our unfortunate civil war [sic] is a tribute to American valor [my emphasis]… And the time has now come… when in the spirit of fraternity we should share in the care of the graves of the Confederate soldiers…The cordial feeling now happily existing between the North and South prompts this gracious act and if it needed further justification it is found in the gallant loyalty to the Union and the flag so conspicuously shown in the year just passed by the sons and grandsons of those heroic dead.”

The response from Congress to this plea was magnanimous and resulted in the Appropriations Act of FY 1901 (below).

Remarks: More important than the amount (worth substantially more in 1900 than in 2000) is the move to support reconciliation by Congressional act. In 1906, Confederate Battle flags were ordered to be returned to the states from whence they originated. Some states refused to return the flags. Wisconsin still has at least one flag it refuses to return.

Authorized the furnishing of headstones for the graves of Confederates who died, primarily in Union prison camps and were buried in Federal cemeteries.

[Editor’s Note: I might also add here that the opening ceremonies off every Sons of Confederate Veterans Reunion always include a welcoming address by the commander of the Grand Army of the Republic descendent organization…jim dean]

This law, passed by the U.S. Congress, authorized the “Secretary of War to erect headstones over the graves of soldiers who served in the Confederate Army and to direct him to preserve in the records of the War Department the names and places of burial of all soldiers for whom such headstones shall have been erected.”

Remarks: This act broadened the scope of recognition further for all Confederate soldiers to receive burial benefits equivalent to Union soldiers. It authorized the use of U.S. government (public) funds to mark Confederate graves and record their locations.

Remarks: While this was only a gesture since the last Confederate veteran died in 1958, it is meaningful in that only forty-five years ago (from 2003), the Congress of the United States saw fit to consider Confederate soldiers as equivalent to U.S. soldiers for service benefits. This final act of reconciliation was made almost one hundred years after the beginning of the war and was meant as symbolism more than substantive reward.

U.S. Code Title 38 – Veterans’ Benefits, Part II – General Benefits, Chapter 15 – Pension for Non-Service-Connected Disability or Death or for Service, Subchapter I – General, § 1501. Definitions: (3) The term “Civil War veteran” includes a person who served in the military or naval forces of the Confederate States of America during the Civil War, and the term “active military or naval service” includes active service in those forces.