Home Veterans THIRD PALESTINIAN INTIFADA: All Arabs to March on Israel on May 15th 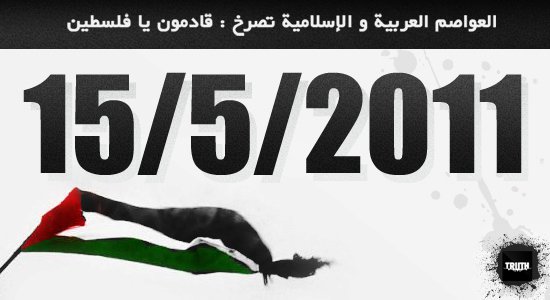 “With those powerful political storms rolling up the Middle East, and with this unstoppable and unpredictable domino effect of popular uprisings, how long before we watch the Israeli domino piece fall down”

“And if dictatorships are not tolerated in the Arab world anymore, why the Israeli quasi-dictatorship over the Palestinians should be any exception” 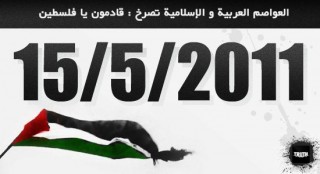 All of The popular uprisings that swept through the Arab world have been preplanned and officially launched on facebook pages weeks in advance.

Pro-Israel lobbying. An Israeli Cabinet minister, the Anti-Defamation League (ADL) and a massive American-Zionist campaign have succeeded in pressuring Facebook into removing the “third Intifada” page, which clearly calls for an all-Arab uprising against Israel.
According to the facebook “cause” page, the plan for the intifada would go as follows;

Friday, May 13th
In Egypt, the epicenter of the Arab world, the biggest Arab country and from Tahrir square at the heart of Cairo where the whole Arab spring has sprung and gained fervent momentum, this massive Arab intifada will be launched.
Millions will gather once again in Tahrir square at the heart of Cairo but this time to call for all Arab-march toward Israel.

This mass protest will come two days prior to the actual march, as a clear message to Israel and the rest of the world that liberating Palestine is the core cause for every Arab in the Middle East. And that restoring Jerusalem is all Arab’s sacred mission

Sunday, May 15th
To commemorate the Palestinian exodus day 1948 ( Nakba) when well over 750000 Palestinians were forcibly expelled out of their home land by Israel, similar number of Thousands angry Arab protesters from Egypt, Jordan, Syria, Lebanon along with their Palestinian brothers from Gaza and the occupied west bank will advance toward Israel in what they call, the third intifada

In their march they will be denouncing the ongoing Zionist occupation of the Arabic land of Palestine and calling for internationally recognized independent Palestinian state over its legitimate pre-1967 borders with Eastern Jerusalem as its capital.

Those fair Palestinian demands have been begged for by all ways known to diplomacy over the last 60 years. But since diplomacy has utterly failed the Arabs of Palestine and since politicians have granted them nothing except despair and Diaspora, they thought it was time they put their life into their own hands.

And what could be more timely than this Arab spring, which a lot of Arabs could not see or rather imagine approaching its full bloom without Palestine included.

This revolutionary plan that has been publicly posted on a facebook “cause” page and given the daring title “the third Palestinian Intifada” as there has been two Palestinian Intifada- uprisings- before. The first was sparked in 1987 and the second or what is known as the Aq’sa intifada in 2000, during both uprisings, Israel had to live through years of domestic unrest and worldwide condemnation of its apartheid and oppressive policy toward the Palestinians.

But as this “cause” page managed to attract almost 300000 fans and incredibly growing number of visitors in just few days Israel grew restlessly nervous about it. And nervously restless Israel acted in response.
What was worrying Tel Aviv is the fact that, so far, all Arab uprisings have been kicked off on facebook pages. So, under the boiling situation in the Arab world this facebook call couldn’t be underrated nor neglected.

With the unbelievably growing traffic to the facebook page and the spread of the call for a third intifada Israel couldn’t just stand watching underneath its big sign that reads “The only democracy in the Middle East”
Quickly switching signs, Israel grabbed the “Israel-hating and anti-Semitism” sign and put on its despotic mask, and before the administrators of the third intifada knew it, Yuli Edelstein, Israel’s Minister of Diplomacy and Diaspora Affairs, on the last week of March wrote Mark Zuckerberg, Facebook co-founder and told him ..

“the social network site has great potential to rally the masses around good causes, and we are all thankful for that. However, such potential comes hand in hand with the ability to cause great harm, such as in the case of the wild incitement displayed on the Third Palestinian Intifada page”

A facebook statement said on Monday of the first week of April that whiles the “third Intifada” page “may be upsetting for someone, criticism of a certain culture, country, religion, lifestyle, or political ideology, for example — that alone is not a reason to remove the discussion.”

At that point it was clear to Israel that this Zuckerberg is not getting the message, Israel didn’t not seek his eloquent definition of the site’s terms for freedom of speech, removing the page that what Israel wanted. So Israel, with its Zionist lobbies and pro-Israel campaigns began to pull some strings and show some muscles and it did not take long before Mr. Mark Zuckerberg came to his senses and reevaluated the page as inciting violence against Israel.

And to make sure this will always be a lesson, learned the hard way, less than a week after facebook removed the intifada page; Zuckerberg was hit by a law suit seeking more than $ 1 billion in damages, for doing too little too late. The law suit has been filed by one of the American Zionist puppets- let off the leash- by the name of Larry Klayman.

After the page was no longer available on Tuesday, ADL director Abraham Foxman commented ..

“By taking this action, Facebook has now recognized an important standard to be applied when evaluating issues of non-compliance with its terms of service involving distinctions between incitement to violence and legitimate calls for collective expressions of opinion and action. We hope that they will continue to vigilantly monitor their pages for other groups that call for violence or terrorism against Jews and Israel.”

But that will be mission impossible, for how could facebook go after thousands of Arab users who replaced their profile photos with the poster photo of the third intifada. Will facebook be able to pull down the other pages that began to play the same intifada tune?
Why can’t Israel face the truth, it is crystal clear, it needs no terrorizing of Zuckerberg or Goldstone. Arabs will never accept Israel as a neighbor state as long as Palestine is being systematically wiped off the map by the Zionist military dictatorship.

Israel could intimidate facebook but not the millions of awakening Arabs.
If facebook to block any page or any account that speaks unfavorably of Israel that will mean that Mr. Zuckerberg is going to sacrifice the hundreds of millions of Arabs and Muslims who are already using facebook worldwide.

Could facebook, contrary to its previous role in boosting the Arab uprisings, save the Israeli domino piece from falling?
That is yet to be seen.