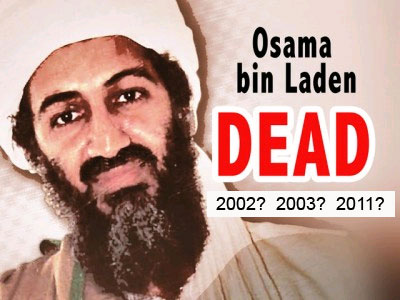 Osama bin Laden’s death, who do you believe?

The incident this week in Abbottabad, Pakistan was always intended to be “self-discrediting.”  In a time of rigged voting machines and rule by decree, a time of military tribunals and tortured defendants, the concept of evidence and accountability is a joke.  Consider the current bin Laden farce what it was intended to be, the American government reminding its people and the people of the world how little respect it has for them.

There is no need for conspiracy theory, no need for talk of hoaxes, we have gone far beyond that.  Evidence of bin Laden’s death being covered up by the Bush administration is, not only overwhelming, but long ago entered the public domain.

As the hours pass and reality soaks in, a more serious question arises; “Why now?”

Newshounds and insiders are aware that Wikileaks has been proven to have ties to an intelligence organization hostile to, not just Iran and Pakistan but the United States as well.  Though the story broke last summer, it wasn’t until early December, 2010 that Zbigniew Brzezinski provided confirmation.  So when Wikileaks, only a few days ago, announced that a nuclear weapon had been placed “underneath” a major European target by “Al Qaeda” to be detonated upon the capture of Osama bin Laden, a man most knew to be dead for a decade, “insiders” became both fearful and vigilant.

Real insiders are far more wary of threats from Wikileaks than “Al Qaeda.”  They know Wikileak threats come true because they come from people capable of making them come true.

The idea of bin Laden’s death has settled in.  The factions have taken stock, conspiracy theorists, the government apologists and disinformationalists and the professionals.  Years ago, top military and intel insiders had all agreed bin Laden died in late 2001.  The CIA’s director, Leon Panetta, now Secretary of Defense stated, flat out, that nothing had been heard of bin Laden since “late 2001.”  By saying this, he indicated with categorical certainty, that all supposed Al Qaeda or bin Laden statements since that time were deemed “unreliable” by the CIA.

Expect video of bin Laden’s killing to be released, medals to be given out, backs to be slapped and, as usual, pockets to be lined.  The videos could be as old as the frozen corpse of bin Laden himself, dumped into the Indian Ocean.

There has been little out of Washington DC since the “world domination” cabal, PNAC (Project for a New American Century) or the Brzezinski “World Chessboard” counterparts outlined the need for a “Pearl Harbour scale” event with a “cardboard cutout” boogeyman to act as backdrop for re-engineering the face of the planet.  After the “event,” we would see the seizure of Central Asia’s hydrocarbon resources, the collapse of the world’s monetary systems and a political upheaval to spread across the world that would leave every political institution in every country vulnerable to the dictates of an unseen “globalist” hand.

Is there any surprise that the “reported” killing of Osama bin Laden has not been accepted in the United States as more than “ho hum” news?  First off, the wingnuts have created a new Obama conspiracy and, as usual, they have gotten it totally wrong.  The staging of the bin Laden “street theatre” has far more ominous consequences than the simple manipulation of public opinion in the United States.

Now, out from under rocks, from the deepest recesses of the political world, the long discredited characters like Donald Rumsfeld, are now crawling out into the sunlight, fabricating wild conspiracy tales to support their criminal acts, the kidnapping, murder and torture that they inflicted on the world on a scale not seen since the death of Adolf Hitler.

Let’s not let facts get in the way.

First of all, for those of you who don’t know it, bin Laden had nothing to do with 9/11, was charged with nothing about it.  Secondly, the criminal charges against bin Laden were not backed by any evidence, not enough for an honest indictment.

Osama bin Laden was a CIA fundraiser with no experience whatsoever in terrorist activities, military planning, weapons, explosives or leading people.  Furthermore, Sibel Edmonds, former FBI translator (and VT staff writer) had, during her employment, seen documents verifying Osama bin Laden’s continued service to the United States, even on 9/11/2001.  He was assisting the CIA in funding covert operations while the World Trade Center was being demolished and the documents prove it.

The reports released to the public, beginning with the falsified “death photo” published by the Associated Press to the stories of bin Laden using his wife as a “human shield” are, each, wilder than the rest.  Each story is carefully calculated to misdirect attention from real questions of import.  Asking how real or imaginary bin Laden, most likely no more alive than a chicken leg after a microwave defrost cycle, “acted” when confronted by 25 Navy Seals is no more valid than those dedicated to 9/11 Truth bickering about explosive compounds that brought down Building 7 when the real issues of who was responsible are allowed to “slip away” unnoticed like a thief in the night.

What can we say about Osama bin Laden?  He is certainly dead now and has, in all probability, been dead for a decade.  We can also expect that his “public” death will act as a harbinger of misfortune for the world, heralding a period of long calculated destabilization aimed at Pakistan and Iran, but ultimately striking the heart of America and NATO.

What we can expect is an act of carefully staged “false flag” revenge.

The frozen body of Osama bin Laden, very real “currency,” would not have been spent on less.