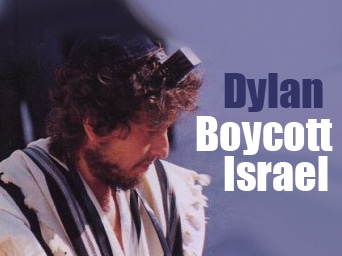 “The only person you have to think twice about lying to is either yourself or to God.”-Bob Dylan

Tickets are currently unavailable online for Bob Dylan’s June 20th concert at Ramat Gan Stadium but may still be available at the box office in Tel Aviv, Israel.

For months numerous Facebook groups have been calling for Bob Dylan to stand with the Palestinian call for BDS: Boycott, Divestment and Sanctions on Israel until Israel abides by international law and ends its brutal occupation of the indigenous Palestinian people and then they will live like a good neighbor in Arab territory.

As the occupation of Palestine is not on Bob’s radar screen, I wonder if Bob has even heard of Mordechai Vanunu, who today walks the streets of Tel Aviv as he waits for Israel to allow him the right to leave the state.

Vanunu spent 18 years in jail-most all in solitary-for telling the truth and providing the photographic proof of Israel’s WMD program in 1986. When he was released on 21 April 2004, he moved to east Jerusalem for six years and in 2010, endured another 78 days in solitary punishment for defying Israel’s orders and speaking to foreign media in 2004. 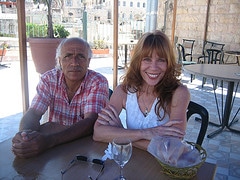 “One in three Israelis considers Vanunu, a Nobel Peace Prize nominee, a traitor and wants him behind bars for the rest of his life. Jewish extremists have vowed openly to kill him. Israeli Justice Minister Tommy Lapid said that the government would not provide security for Vanunu. Before he was released, stories in the media alleged that he was a broken man who wanted to be left alone. But as soon as he emerged out of jail, Vanunu reiterated his position on issues relating to nuclear weapons and the state of Israel in front of the international media. Vanunu is out on bail for a year and could be rearrested if he breaks the severe restrictions attached to his release.

“At the time of his release he was banned from talking to the media, mixing with foreigners and leaving the country for at least one year. Later the government relented and allowed him to speak to foreigners and the media, but not about his work at the Dimona nuclear plant. Israel claims he still holds some of its nuclear secrets. Vanunu, however, said that he had ‘no more secrets’ to reveal.” [1]

Vanunu quit listening to Dylan at 22 and began listening to only classical and mostly opera, as he wrote, “FROM MONTEVERDI TO WAGNER”.

When I last saw Vanunu in east Jerusalem in June 2009, he told me:

“Opera inspires me, it gives me strength. When I was twenty-two I stopped listening to pop; The Beatles, Cat Stevens, Bob Dylan. I like challenges and began listening to opera. It builds skyscrapers in my mind. Opera is nutrition for the brain. Opera enlarges and develops the brain. Opera speaks to my brain. Every morning I am in my room until eleven listening to opera. I find ways to enjoy myself as my way of resistance. I transform anger into positive energy.”

Vanunu’s righteous anger is rooted in being convicted of espionage and treason but all he did was blow the whistle on Israel’s WMD Program.

“Vanunu told the world that Israel had developed between one hundred and two hundred atomic bombs [in 1986!] and had gone on to develop neutron bombs and thermonuclear weapons. Enough to destroy the entire Middle East and nobody has done anything about it since.”-Peter Hounam, 2003 for the BBC.

I wonder if Bob knows that as Vanunu told me, he was “born in Marrakech, Morocco on October 13, 1954. I was the second oldest of eleven; the first seven of us migrated from Morocco in 1963 after the Zionists came and convinced the neighborhood that Israel was the Promised Land. Instead of the land of milk and honey, we were banished to the desert of Beersheba.” [2] 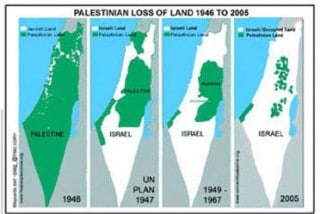 Beersheba is one of over 500 ethnically cleansed Palestinian villages that Israel has literally wiped off the map:

In 2005, Vanunu recalled when he was nine and his life all changed:

“Outside, there was only desert, but I walked a few hours everyday so I could be in the Old City. I started exploring around a Mexican-looking town, never talking with anyone, but always watching everyone. Three weeks later, my mother returned, and then my uncle, Joseph, arrived and took us up north to see some more newly arrived family. We stayed for two months, and then moved into a new apartment in Beersheba. I went to the fifth grade and met a few friends, but they were strange people. They were Romanians and a lot of Middle Easterners, who used bad language and seemed cheap to me. Even the school supplies were inferior to those I had had in Morocco. Even the ice cream was not ice cream; it was just ice, and there was no Pepsi.

“I didn’t like it at all, and wondered why I had to be there. There were only Jewish people around; I never saw an Arab or Palestinian then, and the old mosque was uninhabited. My mother had babies every two years. I preferred to be alone, but I was never lonely. Even when I walked with my father on Saturday to pray, I didn’t talk, but I wondered about God and truth. My father became even more orthodox as I turned away. I couldn’t accept all the teachings and decided I would not accept any of them. At fourteen years old, I began to doubt, and by sixteen, I left Judaism for good. I didn’t know if God even existed, and I didn’t even care. I decided I would decide for myself what is good and what is bad; I didn’t need anyone telling me the rules. For me, it was about doing to others what I wanted them to do to me; I didn’t need any other rule. I was sent to Yeshiva, the Jewish boarding school in the Old City. I experienced a great disconnect from God. I didn’t talk to anyone about any of it. I kept everything within and continued to wonder about finding my way, my direction, and the purpose of my life. I have always searched for answers.

“I kept my mouth shut about not following the faith and excelled in secular studies. With everything else, I just went through the motions–in the eleventh grade, two friends and I were listening to the radio. It is a big sin and crime to use electricity on the Sabbath. The rabbi caught us and called my father to come get me, and when we had almost reached our house, I smelled that he was going to beat me, so I ran the five meters back to school without looking back. The next day, the rabbi sent me for an intensive week of Jewish studies. I was angry for the entire week. After that, I returned back to my boarding room. My two friends and I had become outcasts; we were forever ignored by the other students. The isolation became very comfortable, and I began walking in the desert alone every night without any fear.

“I would just walk around and imagine that I would find my way, and have some success.” [IBID]

Yes and how many more weeks, months, years before Israel allows Vanunu that right and opportunity?

Yes, n how many years can some people exist Before they’re allowed to be free?

Yes, n how many times can a man turn his head, Pretending he just doesn’t see?

For the last few days I have been listening again to Bob Dylan’s 2006 release “Modern Times” and this line has become an ear-worm:

Everything always leads me back to John Lennon and I wonder if this is what he might sing to his friend Dylan on the occasion of his playing Tel Aviv vis-a-vis ignoring the Palestinian plea for BDS:

I’m sick and tired of hearing things
From uptight, short-sighted, narrow-minded hypocritics
All I want is the truth
Just gimme some truth

I’ve had enough of reading things
By neurotic, psychotic, pig-headed politicians
All I want is the truth
Just gimme some truth

I’m sick to death of seeing things
From tight-lipped, condescending, mama’s little chauvinists
All I want is the truth
Just gimme some truth now

I’ve had enough of watching scenes
Of schizophrenic, ego-centric, paranoiac, prima-donnas
All I want is the truth now
Just gimme some truth

Ah, I’m sick and tired of hearing things
from uptight, short-sighted, narrow-minded hypocrites
All I want is the truth now
Just gimme some truth now

I’ve had enough of reading things
by neurotic, psychotic, pig-headed politicians
All I want is the truth now
Just gimme some truth now.

I IMAGINE Bob could do as much JUSTICE for Vanunu as he did for Hurricane-if he will only remember the line has been written ““The only person you have to think twice about lying to is either yourself or to God.”