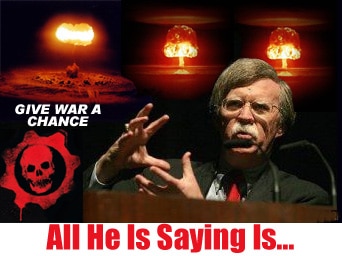 Tools of and for Zionism?

“I’ve argued for [military strikes against Iran] for about three and a half years. Absent military action against Iran’s nuclear weapons program, Iran will have weapons much sooner rather than later. It’s a big mistake to conclude, as I believe the Administration has, that a nuclear Iran can be contained and deterred.”[1]

Bolton also claimed that containment worked against the Soviet Union because its rulers were atheists and that Soviet leader Nikita “Kruschev was considerably saner than the Iranian regime. I think [Iran’s] most likely response would be to unleash Hezbollah and perhaps Hamas for rocket attacks against Israel.”

Bolton claims to be a Lutheran and Ros-Lehtinen an Episcopalian, and both ignore that their Lord promised it is the Peacemakers who are God’s children, NOT those that bomb, torture or occupy others.

The Committee did not raise any follow-up questions, proving once again that America’s ‘occupied’ congressional ‘representatives’ remain deaf, dumb and willfully ignorant about what we the people of truth and for justice know so much about!

In 2008, HAMAS rocket fire and mortar attacks on Israel totaled, 1,750 rockets and 1,528 mortar shells that landed in Israel, double the amount of those from 2006-2007, which marked a five-fold increase over prior years.

Author of “The Worst-Kept Secret: Israel’s Bargain with the Bomb”, Dr. Avner Cohen, is a leading expert on Israel’s nuclear policy of ‘Ambiguity’ which is aided and abetted by USA Foreign Policy:  US and Israeli Nuclear Deception

In a recent interview with Haaretz, Cohen spoke about a late-1969 meeting between Golda Meir and Nixon, “the United States and most of the Western world agreed to accept Israel’s special nuclear status. In other words, Israel did not join the Non-Proliferation Treaty, but it received special status, and pressure was not exerted on it with regard to this topic. Ambiguity is the Israeli-American policy. Without the West’s agreement, there would be no ambiguity.

“I’m often asked why I don’t drop this topic of ambiguity. I refer to historic and geopolitical circumstances, but I mainly believe that on the most basic and deepest level, ambiguity is simply not enlightened behavior, not in terms of the state’s citizens, and not in foreign relations.

“The bitter irony is that right now, ambiguity serves the interests of Israel’s rival in the Middle East. Iran is creating its own version of ambiguity: not the concealment of its project, but rather ambiguity with regard to the distinction separating possession and non-possession of nuclear weapons. It reiterates that it has no intention of building a bomb, but that it has the right to enrich uranium, and even come close to developing [nuclear] weapons – while still remaining true to the nuclear Non-Proliferation Treaty. It is straddling the line, and in my opinion, Iran wants to, and can, remain for some time with the status of a state that might or might not have the bomb. Iran is a state of ambiguity.” [4]

Nothing ambiguous about this:

The two signed a broad-ranging agreement governing military ties between the two countries that included a clause declaring that “the very existence of this agreement” was to remain secret.

On 4 June 1975, Peres and Botha met in Zurich and by then, the Jericho project had been renamed Chalet. The top-secret minutes of that meeting recorded that:

Botha did not go ahead with the deal because of the cost and the fact that final approval was dependent on Israel’s prime minister. South Africa did build its own nuclear bombs and also provided much of the yellowcake uranium that Israel required to develop its nuclear arsenal.

The documents also confirm that former South African naval commander, Dieter Gerhardt admitted there was an agreement between Israel and South Africa called “Chalet” that involved an offer by Israel to arm eight Jericho missiles with “special warheads” understood as atomic bombs.

“Some weeks before Peres made his offer of nuclear warheads to Botha, the two defense ministers signed a covert agreement governing the military alliance known as Secment. It was so secret that it included a denial of its own existence: ‘It is hereby expressly agreed that the very existence of this agreement shall be secret and shall not be disclosed by either party.'” [Ibid]

That ‘secret’ military agreement signed by Shimon Peres and P W Botha of South Africa can be seen here:

On 16 August 2010, John Bolton, employed by FOX News as a commentator called on Israel to attack Iran “now” and said Israel had “eight days” left to launch a military strike against Iran’s Bushehr nuclear facility before Iran injected enriched uranium obtained from Russia into it.

Bolton warned that after 21 August 2010, it “will be too late for Israel to launch a military strike against the facility because it would spread radiation and affect Iranian civilians.”

Bolton has yet to mention the probable spread of radiation from a 40-year-old Vermont nuclear reactor. The Nuclear Regulatory Commission just extended the license of a virtual twin of Fukushima, for another two decades even though that reactor’s cooling tower had literally fallen down, and the plant had repeatedly leaked radioactive fluid. [6]

On 17 March 2011, Prof. Uzi Even, a former top official at Israel’s Dimona, which is also similar in technology to the reactors in Japan, warned that, “The reactors were built about the same time, 40-50 years ago. In principle, the planning of the reactors is similar. The soft underbelly is the cooling system, which must be operated with great force, even after the reactor is turned out. If there is a breakdown in the cooling system, it will cause the core to collapse. That’s what happened at the Japanese reactors.

“While we don’t have tsunamis or such strong earthquakes, the chances of a breakdown in the cooling system, either by chance or deliberately, are very great. Our reactor is 50 years old, far older than what is permitted to operate in other countries. Another factor here, which is absent in Japan, is the possibility of deliberate sabotage of the reactor’s cooling system. We have enough crazies who wouldn’t hesitate to do it if they could.” [7]

Israel’s WMD facility [facilities?] remains un-inspected by the IAEA and nobody in the USA Government will even admit Israel has nuclear weapons:

In April 2004, John Bolton traveled to Israel, just prior to Mordechai Vanunu’s release from 18 years in jail for providing the photographic proof and telling the truth that Israel had already manufactured upwards of 200 nuclear warheads by 1985!

Bush and Bolton had hoped to squelch the truth regarding America’s collusion in Israel’s WMD program and to support Israel’s draconian restrictions against Vanunu which continue to this day to deny his right to leave the state; but they have failed to prevent Vanunu from having contact with internationals, to use and own a cell phone and have Internet access.

In 2005, while President G.W. Bush went searching for WMD’s in Iraq, Vanunu directed him to the only place in the Middle East where WMD’s can actually be found:

“Everybody understands that he has no more secrets. What can a technician know after 18 years in jail, during which technology has advanced with giant steps?

“The Americans, it seems, are very worried. The Israeli security services have to dance to their tune. The world must be prevented by all available means from hearing, from the lips of a credible witness, that the Americans are full partners in Israel’s nuclear arms program, while pretending to be the world’s sheriff for the prevention of nuclear proliferation.” [8]

On 5 April 2009, President Obama stood on the world stage in Prague and admitted, “As the only nuclear power to have used a nuclear weapon, the United States has a moral responsibility to act…When we fail to pursue peace, then it stays forever beyond our grasp. We know the path when we choose fear over hope. To denounce or shrug off a call for cooperation is an easy but also cowardly thing to do. That’s how wars begin. That’s where human progress ends…the voices of peace and progress must be raised together…Human destiny will be what we make of it…Words must mean something.”

“This struggle is not only a legitimate one – it is a moral, inescapable struggle…no government, not even the most democratic, can force us to live under this threat. No state in the world can offer any kind of security against this menace of a nuclear holocaust, or guarantee to prevent it.

“Already now there are enough nuclear missiles to destroy the world many times over. This issue should unite us all, because that is our real enemy.

“Is any government qualified and authorized to produce such weapons.” [IBID]

Is this Government representing we the people of this republic; or are we being led by tools for and of Zionism?