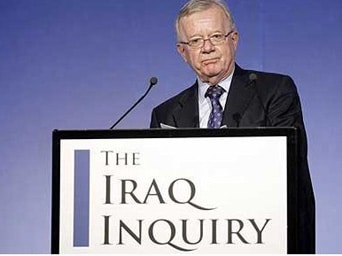 I was amazed to read the headlines in The Telegraph the other day which read:

The article went on to say: In his evidence, the former Downing Street communications director rejected suggestions that he had been asked to “beef up” the dossier on Iraq’s weapons of mass destruction and said its purpose had not been “to make a case for war”. But Major General Michael Laurie, who was the Ministry of Defence’s director general, intelligence collection, from 2002 to 2003, told the inquiry that making a case for war was “exactly its purpose”.

This reminded me of a key witness that was not given the opportunity to present her credible evidence: Ms Tara Davison, a very senior Intel Operative hired by the government to investigate illegal arms trading with Iraq. Ms Davison had previously given evidence to the Scott Inquiry (behind closed doors) but was not called before the Chilcot Inquiry to hand over her sound evidence.

Many people knew of the existence of this evidence including Lord Doug Hoyle and the then Prime Minister Gordon Brown, and they even knew that Ms Tara Davison private dwellings had been raided by 13 male police officers from the Derbyshire Constabulary.

Valuable information that was vital to include in the Chilcot Inquiry (Iraq) was intentionally seized and kept under lock and key by the Derbyshire Police. One can only assume that the order to carry out this raid was authorised by the then Prime Minister Gordon Brown, and yet this information was regarding illegal arms trading by the Conservative Party, so why would they not want this information to be included?

The purpose of the Iraq Inquiry was basically to clear ex-PM Tony Blair of all blame so that he could move forward in his political/commercial life. Could it be that something more sinister lay behind this inquiry that involved both the Tory Party and the Labour Party?

Let’s refresh our minds about what happened in 1989 when a young Tory researcher, David Cameron (under the apron strings of Maggie Thatcher), went to South Africa on a sanctions-busting all-expenses-paid trip (paid by ARMSCOR) to Pellindaba, a nuclear weapons facility. David Cameron was accompanied by Sir Kenneth Warren and the purpose of the trip was to purchase three, battlefield ready 20kt nuclear bombs that the Conservatives wanted to use on Saddam in the event he did not toe the line.

Under the UN radar, South Africa, with the help of Israel, developed ten bombs and test fired one at Prince Edward Island to the South of the country. This left nine weapons that caused South Africa, US, UK and Israel great concern as they did not want them to fall into the hands of the next black regime.

The plan was to ship the entire load to Chicago for decommissioning, but Maggie Thatcher had other ideas and so just before she left office she signed an Urgent Operational Requirement (UOR) document that listed them as being three cylinders! They were prepared and shipped in standard 20-foot sea containers from Durban to Oman without any security. There was a hidden observation window so that the core temperature could be checked as required.

The deal was arranged privately using British taxpayers money and involving arms dealer John Bredenkamp with the assistance of Sir Mark Thatcher and many high profile politicians. £17.8 million was siphoned off and went into the Tory Party Election Fund; which was exposed by the Labour Party in Parliament by Lord Doug Hoyle and Margaret Beckett MP and is listed in Hansard June 22 1993 from Column 197.

The nuclear bombs arrived in Oman and were put into an insecure compound and checked by Dr. David Kelly who had the responsibility to look after the weapons and check that they were in good condition prior to the release of the money. (So you see dear Dr. Kelly knew too much). Some time later the three weapons were stolen by the same arms dealer, John Bredenkamp, and sold on the black market. It was believed that these weapons found their way to Iraq, but were then moved into Syria in three ambulances as they were highly mobile.

Tony Blair with the help of Alastair Campbell then sexed up the Iraq Dossier to influence the UK into going to war. The only problem was that if having nuclear bombs was justification for going to war, then we went to war with the wrong country. Tony Blair created the Nuclear Explosions Act which technically would now cause great concern for many of the players that took part in this highly illegal and deeply flawed operation.

My question would be – did Ms Tara Davison have some information that could have blown open this deceit and should her vital evidence have been accepted before the Chilcot Inquiry? I think the answer is definitely yes. So what was taken from the private residence of Ms Davison?

My other question would be – how did she manage to remove this classified information without any detection and how come she was not arrested under the Official Secrets Act? So what was taken from her residence by 13 male police officers from the Derbyshire Constabulary?

Below is a list that Ms Davison published on her own webpage www.afbio.co.uk before it was taken down; it is extremely sensitive information that should be filed with the Chilcot Inquiry.

Ms Davison gave it a title:

Judge makes it illegal for me to buy a loaf of bread.

Preliminary list of property seized from the two flats and communal areas.

A very large amount of property was seized during the execution of the warrant so this list remains not restricted to but including. In effect they took the lifetimes accumulation of documents and property, some which will only come to light later no doubt

Since then there have been burglaries and numerous “brake ins”, car doors opened windows opened and left open etc

INVESTIGATION INTO PEDOFILES WITHIN THE POLICE AND GOVERNMENT

JOURNALISTIC Material and client in confidence

I am sure we would all agree that this was exceptional classified documentation and should be presented to the Chilcot Inquiry. Last, but not least, what that list of Paedophiles that was discussed with Tony Blair?

Peter Eyre, a former British Naval officer, worked at NATO headquarters, and spent a lot of time in the Middle East and South East Asia as a petroleum consultant; he lives in the UK and writes regularly for the Palestine Telegraph; his website is www.eyreinternational.com