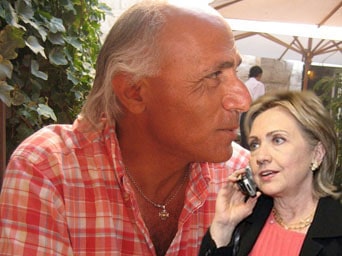 [Washington, D.C.] On Monday morning around 9 AM, I left a message with the person answering the phone for Secretary of State Hillary Clinton seeking a statement regarding Israel, Nuclear Weapons and Mordechai Vanunu. I told her I was a columnist for VT, Salem-News, others and I have been following the saga of Mordechai Vanunu since 2005.

Five hours later Ms. Beth Gosselin returned my call and I filled her in-as I have two previous media representatives regarding the following-but this time I also mentioned I am a candidate for U.S. House of Representatives from Florida, and no doubt she had not yet encountered a candidate like me before.

Beth laughed and she did a few times more before we hung up. As before, I won’t hold my breath that I will receive a reply as none ever came via Mr. Edgar Vasques, State Department Media Affairs Officer and Ms. Nicole Thompson, Press Relations Officer for Clinton.

Both were as gracious and patient as Ms. Gosselin and Ms. Thompson even raised my hopes a few months ago when she told me “it is not impossible to receive an answer from the Secretary of State.”

Ms. Gosselin also laughed at that.

I emailed her the following:

In April 1999, thirty-six members of the House of Representatives signed a letter calling for Vanunu’s release from prison because they believed “we have a duty to stand up for men and women like Mordechai Vanunu who dare to articulate a brighter vision for humanity.”

America is a Member State of the UN Universal Declaration of Human Rights, and the establishment of Israel’s very statehood was contingent upon upholding it.

(2) Everyone has the right to leave any country, including his own, and to return to his country.

Article 14:
(1) Everyone has the right to seek and to enjoy in other countries asylum from persecution.

Vanunu told me, “All the secrets I had were published in 1989 in an important book, by [Nuclear Physicist] Frank Barnaby, “The Invisible Bomb: Nuclear Arms Race in the Middle East.”

Barnaby testified, “I found Vanunu very straightforward about his motives for violating Israel’s secrecy laws he explained to me that he believed that both the Israeli and the world public had the right to know about the information he passed on. He seemed to me to be acting ideologically.

“Israel’s political leaders have, he said, consistently lied about Israel’s nuclear-weapons programme and he found this unacceptable in a democracy. The knowledge that Vanunu had about Israel’s nuclear weapons, about the operations at Dimona, and about security at Dimona could not be of any use to anyone today. He left Dimona in October 1985.” [1]

It is way past time for Vanunu to be allowed the right to fly from Tel Aviv.