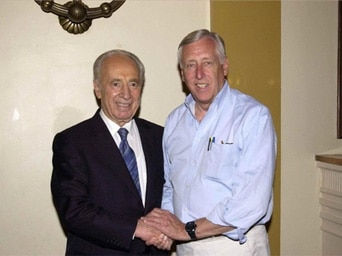 So far, the main stream media (MSM) has protected them.

Instead of returning immediately to their home districts to answer questions about the US economy, 81 House members are flying to Tel Aviv to demonstrate their loyalty and devotion to a foreign power.

Eighty-one members of the US House of Representatives—about 20 percent of the total membership—are enjoying a late summer week-long, all-expenses paid trip to Israel.

This hasbara (propaganda) trip happens every other summer (in non-election years), but this year’s excursion to the shores of the Mediterranean Sea comes at a time when voters back home are not thinking about Israel. They are worried about their under-water mortgages and disappearing 401Ks.

Instead of returning immediately to their home districts to answer questions about the US economy, 81 House members are flying to Tel Aviv to demonstrate their loyalty and devotion to a foreign power. They are hoping, of course, as they bolster their standing with AIPAC, that financially-stressed voters will not be told that the 81 are enjoying an all expenses paid visit to Israel.

So far, the main stream media (MSM) has protected them. The only way to find out if your congress person is living in Israeli luxury for a week is to call his or her office and ask. The MSM has not bothered to identify the 81, except when a single member is mentioned in a fawning local feature story.

Allison Weir describes this bi-annual summer all-expenses hiatus trip as “extraordinary”, because “no other lobby on behalf of a foreign country comes anywhere near controlling such wealth or taking so many of America’s elected representatives on a propaganda trip to its favorite country”.

Weir, writing for the Anti-War blog, notes that most US media outlets ignored the story.

I could not find a complete list of the 81. Since this is not a Codel (congressional delegation) trip, the House website does not  offer any help. Phillip Weiss’ Mondoweiss found a picture released to the media from the Israeli Embassy, with no names attached.

Weiss assumes the picture is that of the Democratic delegation, since Democratic Leader Steny Hoyer shares front row honors with Israeli President Simon Peres. The picture is large enough for constituents to look for familiar faces. 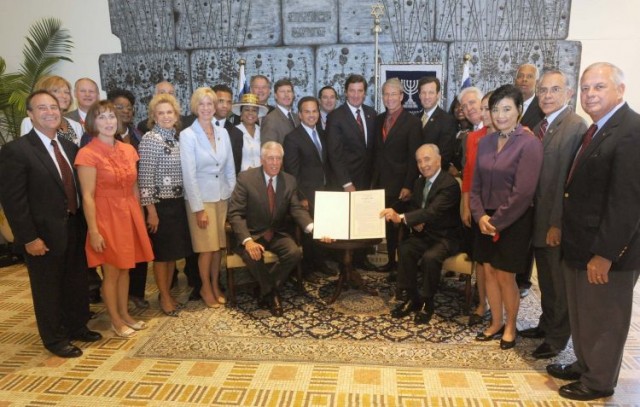 Otherwise, according to a survey by Weir, the Main Street Media has been respectfully silent and protective on the matter of the 81 who used their time away from Washington to visit sites holy to both Jews and Christians and to listen to lectures by Israeli leaders. Here is what Weir found in her survey:

The Associated Press, America’s number one news service, has decided not to report on a lobbying group taking 81 representatives to a foreign country in order to influence their votes.

Even though the trips are being reported by news media in Britain, Iran, India, Israel, Lebanon, and elsewhere, AP has decided to give the story a pass. When contacted about this, an AP editor in Washington, D.C., said AP knew about the trips and was “looking into it.”

When the Chicago Tribune learned that Jesse Jackson, Jr., was on the Israeli trip, it treated the visit as a human interest, feel good, story.

The Tribune used a short item from the Associated Press to inform its readers that Jackson was traveling abroad to evaluate how well Israel was handling US tax dollars which Jackson and his colleagues so generously send to Tel Aviv.

The AP story is a case study for a Journalism 101 class on how not to write a story involving a major congressional figure. Here is the soft story the Tribune ran on August 7:

The Illinois Democrat is scheduled to meet with Israeli and Palestinian leaders as he discusses what he calls “the quest for a lasting peace in the region.” He has meetings set with Israeli President Shimon Peres, Palestinian President Mahmoud Abbas, prime ministers and others.

Jackson says he’s looking forward to learning about Israel’s business and commercial sectors as well as the latest tools and technology the country is using in its fight against terror.

The trip is being arranged and paid for by the American Israel Educational Foundation, a privately funded charity.

And that is all Tribune readers know about the journey of the 81. The AIEF is a “privately funded charity”? Nothing about the AIPAC parentage of the “charity”, and nothing at all about Jackson’s large number of traveling companions.

John Reuben, national advocacy director of of the U.S. Campaign to End the Israeli Occupation, reports that in spite of the media’s protective cover, at least one Jackson constituent, is on the case.

Yali Amit, an Israeli-American constituent of Rep. Jackson, Jr. called his office to oppose his participation in the trip to Israel. He was told that Rep. Jackson, Jr. wants to learn what is happening there because of his position on the appropriations subcommittee that approves military aid to Israel.

Amit retorted that “you can’t learn what goes on there on a paid trip of a propaganda arm of the Israeli government.” And [Reuben adds] you certainly can’t learn about the devastating impact that these U.S. weapons have on unarmed Palestinian civilians, nearly 3,000 of whom were killed by the Israeli military over the last decade. 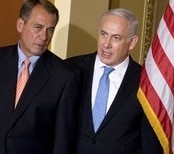 This year’s hasbara trip involved three separate delegations, two Republican and one Democratic; no bipartisanship here after those ugly DC scenes involving the debt ceiling.  The 81 members will visit with Israeli leaders, including Prime Minister Benjamin Netanyahu, who was last greeted enthusiastically by 29 standing ovations when he spoke before a joint session of Congress earlier this year.

The Jerusalem Post was quick to assure American tax payers that no US tax dollars would be used on the trips. (“Move along folks, nothing to see here”.)

All expenses for the 81 members and any spouses and staff members who choose to travel, are covered by the American Israel Education Foundation (AIEF), better known as AIPAC’s education arm. We know all about AIPAC, but what is this AIEF?

The AIEF was created in 1990 as a supporting organization of AIPAC, America’s foremost pro-Israel lobby. Financial support for AIEF, a non-profit organization, comes from tax-exempt contributions, most notably from the Charles and Lynn Schusterman Family Foundation.

AIEF, according to its mission statement, “provides grant monies to educate opinion leaders about the U.S.-Israel relationship, to expand public awareness about issues affecting the Middle East and to encourage participation in public affairs, especially by students on college campuses where anti-Israel propaganda is rampant.”

So, strictly speaking, no direct US tax dollars are funding the 81 House members on their summer outing. But it is also true that the members are traveling on round-trip first class airline tickets ($8,000 per traveler) and enjoying an all-expenses tax-free paid trip with funds from a US tax free. non-profit organization.

But the question lingers: Do these transactions meet the requirements of the US tax code. The answer, from Legistorm, a website that tracks congressional travel, suggests that these clever partners, AIEF, which is in the education business, and AIPAC, which lobbies on behalf of the state of Israel, have found themselves a convenient “sleight of hand” tax loophole.

According to the latest publicly available tax return of AIEF, the organization has no paid employees — an astounding feat in itself for an organization that raked in more than $26 million in 2009 and a mind-blowing accomplishment for an organization running three huge congressional delegations in one month.

AIEF’s partner, AIPAC,  reports that in 2009, it very generously contributed more than $3.2 million of employee salaries to cover the staff costs of AIEF.

Legistorm also reports that two years ago, during the 2009 summer congressional recess, AIEF sent 50 lawmakers and staff members from both parties on a fully funded trip to Israel.  Included in the 2009 delegation were House Majority Leader Steny Hoyer (D-Md.), who returned with this year’s even larger delegation of 81 House members, and Rep. Michele Bachmann (R-Minn.), who had business in Iowa and did not make it to Israel this August.

How tight is the Israel Lobby’s grip on Congress? What keeps these elected representatives coming back, year after year, like so many obedient children making their mandatory holiday visit to visit aging parents?

Allison Weir discovered one poignant story about an earlier traveler:

Not all those going on these trips are enthusiastic. The wife of one congressman who made a similar trip some years ago said that she and her husband had never been exposed to such pressure in all their lives. She said that at one point on their trip, her husband — a normally extremely tough man — was curled up in a fetal position.

There have been several internet hints that a few of the 81 will try and escape their Israeli minders long enough to cross over into the Occupied Palestinian Territories where they hope to experience the Palestinian narrative.

That could be a risky move, not for security reasons, but for their return flight home.  It is an abrupt shift from El Al Business Class to a middle seat in Coach. What happens to the campaign contributions these “escapees” had hoped to gain from making the trip in the first place?  These funds will dry up, quickly.

For their troubles any “escapee” who is exposed by the hasbara police, will still have the enormous advantage of bringing home pictures and memories of talking to real Palestinians, not Uncle Toms.  Inshallah, they will also bring back to the voters, a congress member with a heightened sense of self-worth.

James Wall is currently a Contributing Editor of The Christian Century magazine, based in Chicago, Illinois.  From 1972 through 1999, he was editor and publisher of the Christian Century magazine.  He has made more than 20 trips to that region as a journalist, during which he covered such events as Anwar Sadat’s 1977 trip to Jerusalem, and the 2006 Palestinian legislative election. He has interviewed, and written about, journalists, religious leaders, political leaders and private citizens in the region.  Jim served for two years on active duty in the US Air Force, and three additional years in the USAF (inactive) reserve. He can be reached at:  [email protected]James M. Wall