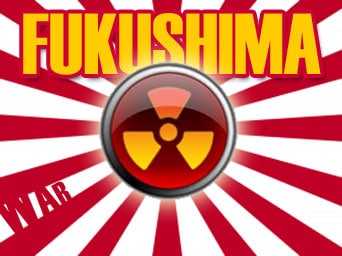 Giant Nuke Weapons Aimed at the US, Switched ON

(San Francisco) – Japan is readying six huge, long acting nuclear weapons for immediate use against the country’s economic and military foes.  Chief among those is the United States. The weapon is radioactive poison gas from the six destroyed American reactors and old reactor cores at Fukushima Daiichi Nuclear Power Plant.

Fukushima Daiichi is now fully weaponized in concept and, in just days, in real life.

Long denied their own nuclear weapons by the US, their WW II wartime conqueror, re-builder, Master and Patron, the Japanese are commonly thought by insiders to be capable of building nuclear weapons easily over a weekend. This aggressive approach is even  more ingenious and imaginative.

Fukushima Daiichi Nuclear Power Plant’s six reactors transformed to possibly six huge radioactive isotope spewing nuclear weapons; potentially as much as the equivalent of about 2,000 Hiroshima Atomic Bombs over a period of months and even years. Japanese Prime Minister Kan and the Cabinet were notified immediately.

Unlike the Chernobyl nuclear disaster involving only one reactor six months out, the Fukushima smash up is no closer to being “contained,” as the government cheerfully puts it than it was on Day One – March 11, 2011

Atomic bombs, like the one that incinerated Hiroshima, create more than 1,400 radioactive and highly lethal “isotopes;” or, radioactive variations of the metal uranium. Atomic reactors do the same thing, since they are merely vastly slowed down, very large atomic bombs.

Now as a result of stunning Japanese ingenuity, the unparalleled nuclear fury, disease and concentrated death of the out-of-control reactors will be aimed directly at the United States. Nothing short of a full scale US invasion and bombing can turn the situation around. For more than six months Fukushima Nuclear Power Reactors have irradiated Japan and nearby countries such as Russia, China,  South Korea, and North Korea, for the most part. The “tents” turn that all around. The die is cast, the Japanese leadership has made their decision; so be it.

To date, American President Obama has done nothing that VeteransToday knows of to stem this dire, immediate and active nuclear threat to all residents of the United States.

The six Fukushima Daiichi nuclear weapons are in Northern Japan on the Pacific Coast facing the West Coast of the United States. Travel time from Fukushima to San Francisco, Seattle or Los Angeles is a few minutes by US space based weapons systems and others that are up there.

Japan’s Fukushima Daiichi poison gas nuclear fallout is deployed by steady easterly winds and is much more dependable than space based weapons. The one way trip from Fukushima’s crippled reactors to San Francisco, LA and Seattle takes 4 days by the ever present Jet Stream winds and as much as 9 days by lower level winds. This is nothing new; it has been the case since the Fukushima disaster March 11, 2011.

What is new is that the Japanese government, the Japanese self defense forces and their corporate favorite TEPCO, the Tokyo Electric Power Company, are encasing the semi-permanent radiation spewing Stationary Nuclear Weapons  (SNW) in giant building sized tents or weapons condoms.

Powerful fans collect and pump the highly radioactive uranium gas and aerosols through armored chimneys directly into the air far above Fukushima Daichi’s wrecked nukes. From there the Radioactive Gas (RadGas) heads East to the United States. Since poison gas is imprecise, Mexico and Canada are also at risk.  Japan’s weapons’ breakthrough was thinking of them as big nuclear weapons in the first place.

All in all, Fukushima Daiichi is a rather natural and organic weapons system with six known core devices manufactured by weapons maker GE (General Electric.) The nuke reactors’ design was first used in US fast attack nuclear submarines. The trashed nukes are now enormous nuclear weapons designed from the ground up to kill and maim American residents in large numbers.

The faithful, and dying, Japanese Kamikaze workers at Fukushima Daiichi could even hook up solar panels and tide based electrical generators for an almost limitless supply of free electricity to run the huge air pumps to push the hot radioactive gas and aerosols high into the air for decades; or, until they are destroyed, whichever comes first.

The intensely radioactive poison gas is blanketing the US with no foreseeable end in sight. The President is left with no choice but to use any means necessary to protect the United States. As a result, nothing is “off the table.”

It is your move, Mr. President.

Copyright by Bob Nichols Sept 16, 2011. All rights reserved. Distribute with credit and all Notes and Sources. Reach Bob Nichols at [email protected]