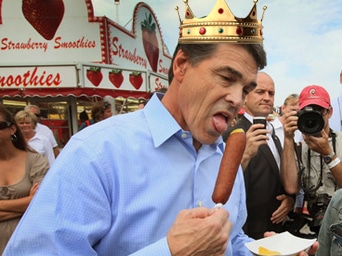 Texas Gov. Rick Perry has been to Israel more than any other presidential candidate and he believes he’s on a mission from God.

In his 11 years in office he also wrested much power away from that states Legislature.

This citizen of conscience for US House of Representatives has been to Israel seven times since 2005, but I spent my time in occupied Palestine, on my mission from God: seek truth and report it!

When Perry led a delegation to Israel in 2009, he told The Jerusalem Post, the alliance was a natural one, “When I was here for the first time some 18 years ago and I was touring the country, the comparison between Masada and the Alamo was not lost on me. I mean, we’re talking about two groups of people who were willing to give up their lives for freedom and liberty.” [1]

Denial is safe harbor for those who cannot bear the light of truth, and only the blind miss the glaring similarities of what European colonists did to the Native Americans and what Israel has done to the indigenous Palestinians.

Perry’s recent opine piece for The Jerusalem Post, “The Palestinians’ illegitimate UN gambit” follows with my corrections to this presidential candidates misunderstandings.

PERRY: “Our nations have developed vital economic and security relationships in an alliance based on shared democratic principles, deep cultural ties and common strategic interests.” [2]

America and Israel’s economies are both tied to an Industrial Government Military SECURITY/Surveillance Complex and the poor keep getting poorer while the merchants of war are fat and happy.

PERRY: “The Jewish state faces growing hostility from Turkey. Its three decade-old peace with Egypt hangs by a thread. Iran pursues nuclear weapons its leaders vow to use to annihilate Israel.”

It was President Harry Truman who crossed out the word “Jewish state” on the draft of the Establishment of Israel that was cabled him and substituted “State of Israel” which he affirmed was contingent upon Israel upholding the UN Universal Declaration of Human Rights: Read more…

Israel’s ambassador to Egypt, Yitzhak Levanon, fled to Israel following protests that erupted after Israel failed to apologize for murdering nine Turkish humanitarian activists and killings five Egyptian Policemen. Some of Egypt’s political parties have also called for changes to the country’s 1979 peace treaty with Israel. The planned demonstrations in Jordan at the Israeli embassy in Amman on Thursday forced Israel to pull its ambassador and staff out as the people called for ending the shameful “peace treaty”.

“In his October 2005 speech, Mr. Ahmadinejad never used the word ‘map’ or the term ‘wiped off.’ According to Farsi-language experts like Juan Cole and even right-wing services like MEMRI, what he actually said was ‘this regime that is occupying Jerusalem must vanish from the page of time.’

“In this speech to an annual anti-Zionist conference, Mr. Ahmadinejad was being prophetic, not threatening. He was citing Imam Khomeini, who said this line in the 1980s-a period when Israel was actually selling arms to Iran, so apparently it was not viewed as so ghastly then.

“Mr. Ahmadinejad had just reminded his audience that the Shah’s regime, the Soviet Union, and Saddam Hussein had all seemed enormously powerful and immovable, yet the first two had vanished almost beyond recall and the third now languished in prison.

“So, too, the ‘occupying regime’ in Jerusalem would someday be gone. His message was, in essence: ‘This too shall pass.'”

PERRY: “And now, the Palestinian leadership is intent on trashing the possibility of a negotiated settlement of the conflict with Israel in favor of unilateral recognition of a Palestinian state by the United Nations. The Palestinian plan…threatens Israel and insults the United States…They seem to prefer theatrics in New York to the hard work of negotiation and compromise that peace will require.”

What decades of negotiations and the “peace process” have wrought is to disseminate the so-called holy land into pieces!

What threatens Israel is being held accountable and responsible for a 44-year military occupation; whereas under international law occupations are to be temporary and occupiers are not to pilfer resources, colonize or build a wall on land that belongs to the occupied.

“Financed with U.S. aid at a cost of $1.5 million per mile. The Israeli wall prevents residents from receiving health care and emergency medical services. In other areas, the barrier separates farmers from their olive groves which have been their families’ sole livelihood for generations.” [3]

PERRY: “It was a mistake to inject an Israeli construction freeze, including in Jerusalem, as an unprecedented precondition for talks. Indeed, the Palestinian leadership had been negotiating with Israel for years, notwithstanding settlement activity. When the Obama administration demanded a settlement freeze, it led to a freeze in Palestinian negotiations.”

PERRY: “In refusing to deal with the recognition of Israel as a Jewish state, and taking this destabilizing action in the UN, the Palestinians are signaling that they have no interest in a two-state solution. The Palestinian leadership’s insistence on the so-called ‘right of return’ of descendants of Palestinian refugees to Israel’s sovereign territory, thereby making Jews an ethnic minority in their own state, is a disturbing sign that the ultimate Palestinian ‘solution’ remains the destruction of the Jewish state.”

Refusing to recognize the rights of the indigenous people of the so-called holy land is what has destabilized the Middle East.

As Israel’s nuclear whistle-blower, Mordechai Vanunu said, “Israel is not a democracy unless you are a Jew.” [4]

The “so called right of return” is what Zionists claim for any Jew without any historical connection to that land to come and colonize upon legally owned Palestinian property.

The establishment of the State of Israel was contingent upon upholding the UNIVERSAL DECLARATION OF HUMAN RIGHTS, which enshrines:

PERRY: “The circumvention of serious negotiations by PA President Mahmoud Abbas demonstrates a basic failure of leadership and a betrayal of the true interests of the Palestinian people.”

The Palestinian Civil Society Calls for:

PERRY: “Since the Oslo Accords were signed in 1993, the US has provided more than $4 billion in aid to the Palestinian Authority. This year alone the Obama administration is seeking to secure $550 million in funding for Palestinians.”

By all accounts the United States has given more money to Israel than to any other country. The Congressional Research Service’s conservative estimate of total cumulative US aid to Israel (not adjusted for inflation) from 1949 through 2010 is $109.001 billion.

During Fiscal Year 2011, the U.S. is providing Israel with at least $8.2 million per day in military aid and $0 in military aid to the Palestinians. (View Sources & More Information)

Our vital interests should be what is best for all Americans first and the “special relationship” with Israel has become a liability for US!

Khalid Sheikh Mohammad involvement in the terror upon America, “By his own account stemmed from his violent disagreement with U.S. foreign policy favoring Israel.” [5]
Abdulmutallab’s attempt to blow up a plane on Christmas Day in 2009, was fueled by “his sympathies toward the Palestinians and anger over Israel’s actions in Gaza.” [Ibid]

The Palestinians have rightly lost faith in the leaders of the West to be honest brokers for justice that could bring peace, and the showdown on 20 September at the UN-the body that partitioned the land and thus is very responsible for the ongoing disaster is the very body that must intervene. 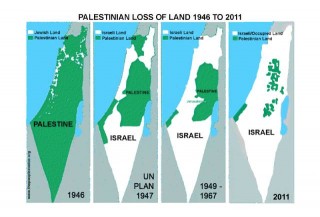 Recognition of a Palestinian state in the UN will not end the military occupation, but it will gain virtual citizenship, a passport and sovereignty, legal protection against violence by Israeli settlers, the right to fight back in self-defense if attacked and potential backing for their claims from international tribunals such as the International Criminal Court and the International Court of Justice.

“The age of warrior kings and of warrior presidents has passed. The nuclear age calls for a different kind of leadership. A leadership of intellect, judgment, tolerance and rationality, a leadership committed to human values, to world peace, and to the improvement of the human condition. The attributes upon which we must draw are the human attributes of compassion and common sense, of intellect and creative imagination, and of empathy and understanding between cultures.” –William Fulbright

This Citizen of CONSCIENCE for House of Representatives 2012 is in solidarity with that!
Come September: