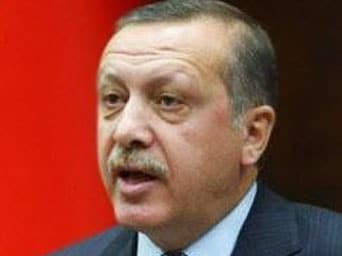 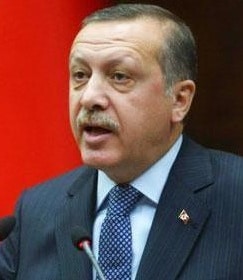 Erdogan declared: “Israel is the West’s spoiled child. To this day it has never executed a decision by the international community.”

On Tuesday, Turkey’s President Recep Tayyip Erdogan told an Arab League meeting in Cairo, Egypt, that a vote to accept a Palestinian state in the United Nations “is not a choice but an obligation.”

Later, on a Cairo television program, Erdogan declared: “Israel is the West’s spoiled child. To this day it has never executed a decision by the international community.”

The Turkish leader was on his second day of an “Arab Spring” tour which was obviously designed to gain Arab support for a Palestinian state application before the UN General Assembly, which meets in New York this week.

Both Palestinian Authority President Mahmoud Abbas and Israeli Prime Minister Benjamin Netanyahu will state their positions in back to back addresses before the UN,  Friday, September 23, setting up a confrontation between “the West’s spoiled child” and a captive population fighting to escape from a military occupation.

So desperate was the US to avoid having to cast its usual pro-Israel veto in the Security Council against the Palestinian Authority/PLO application for UN membership, that it has twice dispatched its pro-Israel diplomatic team, David Hale and Dennis Ross, to Tel Aviv and Ramallah to “persuade” Abbas and Netanyahu to agree to return to negotiations.

The Hale-Ross effort was a failure from the start. The two envoys returned to the region two times, knowing full well that Netanyahu would not budge from his rejection of  two Palestinian preconditions for talks: Stop building settlements and start negotiations along the 1967 Green Line border, both positions advocated in previous statements by President Obama.

In his Friday, September 16, televised address from Ramallah, President Abbas ended speculation that the Palestinian Authority and the Palestinian Liberation Organization (both of which he heads) might yield to US-Israeli pressure and go directly to the General Assembly, bypassing the Security Council where the Obama veto was waiting. That will not happen.  Abbas is going for broke.  He will present his request to the UN Security Council, fully aware that the US will veto the request.

Speaking to reporters in Ramallah, Palestinian negotiator Nabil Shaath said the plan delivered by U.S. envoys Hale and Ross did not meet the two Palestinian demands. This convinced President Abbas that the US was not serious in trying to negotiate peace.

“David Hale and Dennis Ross came with a paper that was the last straw that he [Abbas] could take,” Shaath said. “It seems that it was designed to be rejected.”

One problem the Palestinians had with the American proposal was that it “did not refer to disputed Israeli settlements as illegal, instead attributing their presence to demographic trends since 1967″.

This means that the two most recent Hale-Ross missions have failed, “forcing” President Obama to cast his Israel-lobby dictated, pro-Israel veto. It will not be the first veto President Obama has ordered to reject policies which Obama was on record supporting. The first Obama pro-Israel veto came February 18, blocking a resolution that condemned “Israeli settlements as an illegal obstacle to peace”.

Members of Obama’s own government have tried to alert the President to the danger of giving in to Israel’s every demand. Jeffrey Goldberg wrote recently for the Bloomberg web site that Robert M. Gates, the now-retired secretary of defense, warned Obama, directly, that Netanyahu was “an ungrateful ally”.

In a meeting of the National Security Council Principals Committee held not long before his retirement this summer, Gates coldly laid out the many steps the administration has taken to guarantee Israel’s security — access to top- quality weapons, assistance developing missile-defense systems, high-level intelligence sharing — and then stated bluntly that the U.S. has received nothing in return, particularly with regard to the peace process.

Senior administration officials told me that Gates argued to the president directly that Netanyahu is not only ungrateful, but also endangering his country by refusing to grapple with Israel’s growing isolation and with the demographic challenges it faces if it keeps control of the West Bank. According to these sources, Gates’s analysis met with no resistance from other members of the committee.

When Obama casts his second pro-Israel veto, his action will further damage the President’s standing as an international leader. The glory days of his Cairo speech are over.  The veto will also move the issue to a larger stage, the UN General Assembly, where at last count, there are more than enough voting members who agree with President Erdogan that a vote in favor of admitting Palestine to the UN as a non-voting state “is not a choice but an obligation.”

The veto and the GA vote will guarantee that US prestige in the region, and indeed, around the world, will drop even further. And, what really distresses Israel,  once in possession of a non-voting membership status in the UN, Palestine receives the right to haul Israel and its leaders before the International Court of Justice.

As a result, Israeli officials will be reluctant to travel to any foreign nation, except the US, for fear of finding an ICJ official waiting for them,  subpoenas in hand.

This is not a good time for Obama to alienate an important part of his political “base”, those progressive and liberal voters, already disenchanted by Obama’s Bush-like foreign policy, who will find it difficult to wage a second Obama campaign of “change we can believe in”.

Few from that base are likely to vote for a Republican nominee for president, especially if the nominee is a product of the Christian Right. It is also true that Obama’s liberal/progressive base does not produce anything like the dollars AIPAC generates.

When the US casts that veto at the UN, Obama will be rejecting an important segment of those progressive supporters who, in 2008, walked the streets for him and brought voters to the polls because they believed he would be a different kind of president. The PEPs (Progressive except on Palestine) won’t care, but peace and justice volunteers will.

If enough voting UN members yield to the US-Israel pressure and delay or prevent a Palestinian entry into its UN non-voting state status at the General Assembly, Turkey’s President Erdogan has already indicated that Turkey will refer the legality of Israel’s Gaza blockade to The Hague. According to Ha’aretz:

Edogan’s comments came a week after Turkish Foreign Minister Ahmet Davutoglu first indicated that Turkey was to appeal the International Court of Justice in The Hague as soon as next week in order to probe the legality of Israel’s naval blockade on the Gaza Strip, saying that Turkey could not “accept the blockade on Gaza.”

“We cannot say that the blockade aligns with international law,” he said, adding that the stance taken by the Palmer Commission Report was the author’s “personal opinion, one which does not correspond with Turkey’s position.”

There are dissenting voices within Israeli society that support the Palestinians on this issue. Gideon Levy, veteran Israeli moderate and Haaretz columnist, asked in a recent column:

What will we tell the world next week at the UN? What could we say? Whether in the General Assembly or the Security Council, we will be exposed in all our nakedness: Israel does not want a Palestinian state. Period. And it doesn’t have a single persuasive argument against the establishment and the international recognition of such a state.

So what will we say, that we’re opposed? Four prime ministers, Benjamin Netanyahu among them, have said that they’re in favor, that it must be accomplished through negotiations, so why haven’t we done it yet? Is our argument that we object to it’s being a unilateral measure? What’s more unilateral than the settlements that we insist on continuing to build?

Paul Woodward asks in a posting on his blog, War in Context, “How Can Israel Survive Without Growing Up?” His conclusion:

And thus we see the contradiction which is Israel — forever pumping itself up, flexing its muscles and showing its neighbors that no one should risk messing with the mighty Zionist state, yet all the while knowing that without the protection of the United States, Israel’s survival would depend on a revolutionary transformation.

Absent American protection, Israel, for the first time, would have to seriously take on the challenge of getting along with its neighbors and not, as it has for the last two decades, simply use diplomacy as a facade behind which it can pursue its policies of territorial expansion.

Is the “West’s spoiled child” ready to grow up? And is the United States ready to see that its own patronage is what has allowed the Jewish state to trap itself in such a prolonged adolescence?

There is no way that a Republican president would do anything other than continue to enable Israel in its behavior as the “spoiled child of the West”. It therefore, remains for our incumbent Democratic president to put a stop to this knee-jerk Israel indulgence, either in this term, or in his second term.

The president should start by, first, firing those members of his White House team who have consistently favored Israel in his current and in previous administrations. He must fire the team that put him in the position of contradicting himself not once, but twice in seven months, by vetoing resolutions he supports.

In the city of  Washington, the President will have no problem finding experienced and able replacements who not only understand the difference between “illegal Israeli settlements” and “demographic trends since 1967″, but who grasp that difference both intellectually and existentially.

Note The picture of Turkey’s President Recip Tahyyip Erdogan is from the Associated Press.