Home World The 3rd of this October and Vanunu Mordechai 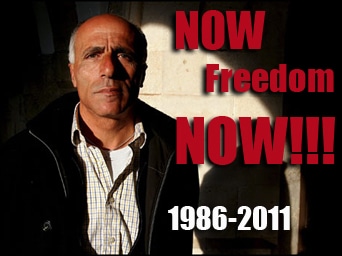 Unless Israel changes the date again, Mordechai Vanunu will learn the Court’s decision on October 3, 2011 if he will be allowed his inalienable right to leave the state.

Here’s hoping what Vanunu said in 2006 will not be a self-fulfilling prophecy:

vanunuvmjc (1 week ago) Hi.The court hearing about the restrictions,not to speak to foreigners,not to leave israel will be on Oct’ 3.(it is possible the date will be changed),I will write on any changes,

About canceling my israel citizenship,we are waiting to hear from Interior minister or we will have one more court hearing. We are waiting for israel to End this case,they must give me my Freedom Now!!!.

On March 4, 2011, I wrote: Before Manning and Assange: There was Vanunu Mordechai, which bears repeating now:

[USA-Israel]–On March 2, 2011, The Army announced it had filed 22 additional charges against Pfc. Bradley E. Manning, the soldier suspected of providing classified government documents published by the WikiLeaks anti-secrecy group. The counts against him involve the leaking of the Afghan and Iraq war logs as well as the quarter million State Department cables disseminated last year.

CBS News national security correspondent David Martin reported that the new charges formally accused Manning of using unauthorized software on government computers to extract classified information, illegally download it and transmit the data for public release by what the Army termed “the enemy.”

CBS Radio News chief legal analyst Andrew Cohen reported that military officials look like they want to throw the book at Manning, not just to punish him, but also to send a message to other service members who may be tempted to do what Manning allegedly did.

In a written statement detailing the new charges, the Army said that if Manning were convicted of all charges he would face life in prison, plus reduction in rank to the lowest enlisted pay grade, a dishonorable discharge and loss of all pay and allowances, but they are not seeking the death penalty. [1]

No mention was made regarding the fact that on January 27, 2011, McClatchy Newspapers reported that Bradley Manning’s, direct supervisor warned that Manning had thrown chairs at colleagues and shouted at higher-ranking soldiers in the year he was stationed at Fort Drum, N.Y., and advised he not be sent to Iraq, where his job entailed accessing classified documents through the Defense Department’s computer system. But superior officers ignored that advice because the unit was short of intelligence analysts and needed Manning’s skills.

“An Army report into the service’s high suicide rate concluded in July that military commanders had become so focused on training troops for deployment that they no longer had the time to address issues such as alcoholism, prescription drug abuse and even violence, and instead hoped they’d disappear in combat…The result was a ‘comedy of errors’ as one commander after another assumed someone else was addressing Manning’s problems, one official said.” [2]

Manning has been held in solitary confinement at the Marine brig in Quantico, Virginia, in inhumane conditions. White House press secretary Robert Gibbs had recently admitted that the White House was not paying attention to Bradley Manning’s extreme confinement conditions, or the fact that pre-approved visitors of Bradley’s have been detained and interrogated by military police in order to block their scheduled visit.

“Military pre-trial confinement is supposed to be about ensuring a soldier’s presence at court martial, yet for eight months now Manning has been subjected to extreme pre-trial punishment through the arbitrary use of rarely applied regulations–specifically the ‘maximum security classification’ and the ‘prevention of injury’ order. Manning is allowed no meaningful physical exercise, he is allowed no social interaction with other inmates, he is kept in his cell at least 23 hours per day, and he is not allowed out of his cell without restraints…There is no allegation that Manning did anything but share truthful information with the American public regarding the realities of our nation’s ongoing wars in Iraq and Afghanistan, with absolutely no benefit to himself, in order to spark public debate regarding foreign policy.” [3]

In 2002, President Bush declared U.S. citizen, Jose Padilla an enemy combatant and he was stripped of all rights and detained at a Navy brig in South Carolina where he was held in solitary isolation for 43 months and denied access to an attorney for two years.

Forensic Psychiatrist Angela Hegarty examined Padilla [in 2006] and concluded the extreme isolation and torture had left Padilla essentially brain damaged, “What happened at the brig was essentially the destruction of a human being’s mind.”[4]

From 1986 to 2004, Israel kept Vanunu in a tomb sized windowless cell-most all of it in solitary confinement.When he was released he was forbidden to leave the state and speak to foreigners.

In the 1980’s Mordechai Vanunu, was a secular Jew who worked as a technician in Israel’s seven-story underground nuclear facility in the Negev called the Dimona. The sign out front claimed it was a Textile Plant and all employees signed a secrecy agreement to never speak about what they did there.

Because Vanunu was a good worker, he was cross-trained in many areas and when he finally realized he was but a cog in the making of weapons of mass destruction, he decided to document the facts by photographing the evidence and soon after resigned and left Israel.

I began a series of interviews with Vanunu in 2005, and that was when he told me that he obtained the keys to the top secret restricted areas after they had been carelessly left in the shower room by a supervisor. Vanunu shot two rolls of film in the underground facility but did not develop them until ten months later while in Sydney, Australia after meeting Peter Hounam, an investigative reporter with the London Sunday Times.

After the two developed the film, they flew to London and Vanunu spent three days with Nuclear Physicist, Frank Barnaby, who had been employed by the London Sunday Times. Barnaby concurred that Israel had manufactured upwards of 200 nuclear warheads by 1985 and he also testified at Vanunu’s closed-door trial.

Just days before the Sunday Times published the front page story with some of Vanunu’s photos, Vanunu was lured from London to Rome, where he was clubbed, drugged and kidnapped by the Mossad.

Vanunu was convicted of treason and espionage, sentenced to 18 years in jail-11 ½ years in solitary- and has been kept under 24/7 surveillance denied the right to speak to foreigners and leave the country ever since he emerged from his windowless tomb sized cell on 21 April 2004.

During Vanunu’s trial, Barnaby testified, “I very vigorously cross-examined Vanunu, relentlessly asking the same questions in a number of different ways and at different times. I found Vanunu very straightforward about his motives for violating Israel’s secrecy laws he explained to me that he believed that both the Israeli and the world public had the right to know about the information he passed on. He seemed to me to be acting ideologically. Israel’s political leaders have, he said, consistently lied about Israel’s nuclear-weapons programme and he found this unacceptable in a democracy. The knowledge that Vanunu had about Israel’s nuclear weapons, about the operations at Dimona, and about security at Dimona could not be of any use to anyone today. He left Dimona in October 1985 and the design of today’s Israeli nuclear weapons will have been considerably changed since then. Modern nuclear weapons bear little relationship to those of the mid-1980.”

Vanunu also informed me, “That President Kennedy tried to stop Israel from building atomic weapons. In 1963, he forced Prime Minister Ben Guirion to admit the Dimona was not a textile plant, as the sign outside proclaimed, but a nuclear plant. The Prime Minister said, ‘The nuclear reactor is only for peace.’

“Kennedy insisted on an open internal inspection. He wrote letters demanding that Ben Guirion open up the Dimona for inspection. The French were responsible for the actual building of the Dimona. The Germans gave the money; they were feeling guilty for the Holocaust, and tried to pay their way out. Everything inside was written in French, when I was there, almost twenty years ago. Back then,the Dimona descended seven floors underground. In 1955, Perez and Guirion met with the French to agree they would get a nuclear reactor if they fought against Egypt to control the Sinai and Suez Canal. That was the war of 1956. Eisenhower demanded that Israel leave the Sinai, but the reactor plant deal continued on.

“Kennedy demanded inspections. When Johnson became president, he made an agreement with Israel that two senators would come every year to inspect. Before the senators would visit, the Israelis would build a wall to block the underground elevators and stairways. From 1963 to ’69, the senators came, but they never knew about the wall that hid the rest of the Dimona from them.

“Many journalists come here to the American Colony, from CNN and NY Times. They all want to cover my story, but their EDITORS say no…CNN wants to interview me; but they say they can’t do it because they don’t want problems with the Israeli censor. BBC is doing the same thing. Sixty Minutes from the United States from the beginning they wanted to do a program, but because of the censor situation they decide not to do it. Also big media from Germany, France, Italy, Japan. None of them wants problems with the Israelis.”

I was NOT a reporter until AFTER I met Vanunu for the first time in 2005 and I HAD NO PROBLEM filling the vacuum The Media would not and that led to the taping of:

On October 4, 2010, the International League for Human Rights in Germany announced Vanunu was awarded the 2010 Carl-von-Ossietzky-Medal. An international campaign was launched to assure he be at the Award Ceremony, in Berlin to receive it on December 12, 2010; but the ceremony was renamed a protest because on October 11, 2010, Vanunu’s Supreme Court appeal seeking to lift the restrictions that have denied him the right to leave Israel was denied.

Because America’s Media leaders have failed to report about America’s political leaders collusion in Israel’s nuclear ambiguity/deceptions, human rights abuses and separation wall: Vanunu’s Message to Hillary Clinton re: The Apartheid Wall this activist reporter wrote, BEYOND NUCLEAR: Mordechai Vanunu’s FREEDOM of SPEECH Trial and My Life as a Muckraker: 2005-2010 and is now a Citizen of Conscience for US House of Representatives, with my only fundraising vehicle being my 3rd book-which is not all I know, but it is ‘all she wrote!’

BEYOND NUCLEAR: Mordechai Vanunu‘s FREEDOM of SPEECH Trial and My Life
as a Muckraker