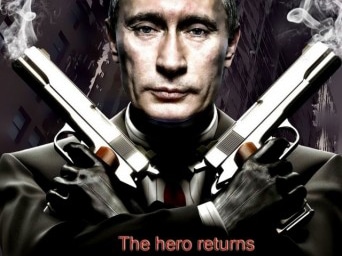 Is Vladimir Putin the only man in the World Who Can Break the Global Drug Trade?

In several recent communications with US, Ukrainian and Russian friends, about the current set of conditions within the former Soviet Union I have been able to confirm that the CIS Countries are under covert assault by the CIA, Mossad, and Drugs Inc.

It appears that the cold war has gone into a new and deadly direction.

Currently Russia and the CIS countries are suffering from a new drug epidemic from the vast quantities of cheap, high quality heroin from Afghanistan. Since the US occupation, the Opium production in Afghanistan has increased one hundred thousand fold.

While this plague of cheap heroin affects the western countries as well, the vast majority of this deadly product is being trucked into Russia and the CIS countries.

The net result is that another generation of young Russian white people is again being destroyed by Zionist interests. Currently 30% of the population under the age of 35 living in Russia and the CIS countries have tried or are using heroin.

The heroin is very pure and high quality, it is very cheap and highly addictive. Currently 75% of the opium produced in Afghanistan is destined for Russia and the CIS states.

Since the USA controls  the source of this cheap high quality heroin, the USA is responsible for this plague upon the people of the Eastern bloc.

It is well documented that US soldiers and private contractors are both protecting the poppy fields and safeguarding the cultivation.

The USDA is even providing agricultural advice (at US taxpayer expense), to increase the yield per acre of opium poppies. The USA is sponsoring this chemical attack upon the Russian people and their allies.

My youngest brother reported to me that his Marine unit was ordered to protect convoys of drug smugglers. And a friend in the State Department has independently collaborated this same fact. I will do everything in my power to have a real war on drugs. Including working with Putin, former GRU, and Spetsnaz units. From reader… JT Ready

It is well documented that the CIA has been involved in drug trafficking since former President George H.W. Bush, served as the CIA Director was in charge, when the CIA took to drug trafficking, primarily to fund off the books projects and avoid congressional oversight of CIA activities. (Recall the Iran-Contra scandal where 47 members the Reagan Staff were convicted and imprisoned)

In the USA the proceeds of CIA drug sales now buys elected officials, Judges and even entire police departments and law enforcement agencies, both in the USA and Mexico.

I have received unconfirmed reports from what I consider to be highly reliable sources that Vladimir Putin is currently recruiting an anti-drug task force to wipe out the drug distribution networks within Russia and the CIS countries.

I have been told this effort will be brutal and complete. It will make the old Stalinist purges look tame.

Mr. Putin is in my opinion a true patriot for his country and his people. He will do whatever is necessary to protect his country and the nation which he responsibly looks after.

He will not allow the formality of trials to stop his efforts. In the USA law enforcement community the standard is,not what you know; it is what you can prove beyond a reasonable doubt. Mr. Putin is not constrained with western liberal democratic politeness which allows drug traffickers and murders to walk away unscathed and enriched.

I have inferred that Mr. Putin is creating his own version of the “Untouchables” with his own Russian version of Elliot Ness to stop the heroin trafficking by CIA and Mossad assets into Russia and the CIS countries. He is recruiting from former KGB/intelligence types and from Spetznaz units.

The word I get is that Mr. Putin is not concerned with convictions; he is focused on stopping the drug traffic into his homeland. I for one hope Mr. Putin takes no prisoners, that the death count is as high as possible and that he is truly successful in eradicating the drug trafficking networks from Russia.

I have also heard that Mr. Putin will not restrict his activities to Mother Russia, that he is forming special units to reach out and kill those involved, where ever they are hiding.

The targets include but are not limited to: certain US politicians who are under USA protection and cover providing the required chemicals to process raw opium into heroin.

Mr. Putin is going after anyone and everyone who has the blood of young Russians on their hands.

He is the quality of leader that we need in the USA, a man who takes his responsibility to his country and people seriously, and will not sell out to the highest bidders, like the CIA, Mossad and the Israel lobby.

I abhor the effects that toxic drugs have on the youth of the world.  I volunteer my support and assistance to his effort to put Drugs Inc. out of business.

Maybe when he is done putting the CIA and Mossad out of business in Russia, maybe the USA will hire him to do the same in our country.

It seems our own government has no desire to stop the drug epidemic in the USA; too many of our own politicians are getting very wealthy from our domestic illegal drug problems.

Mr. Putin, I hope you ask me to volunteer to help; I am willing and able to destroy the monsters that addict our children to drugs so that they can get rich.

My prayers are with you, that you remain strong,  that you stop this horrible problem, and eliminate those who profit from the misery of drug addiction.