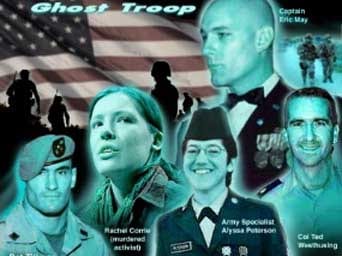 By W. Leon Smith, Publisher of The Lone Star Iconoclast

There is a movement started by Michael Starcke on Facebook to encourage the awarding of the Congressional Medal of Honor to Captain Eric H. May, who has extended his term of military duty to the United States in cyberspace, by founding and commanding Ghost Troop cyber militia.

Capt. May, who also serves as intelligence editor for The Lone Star Iconoclast, has done so while at the same time battling Lou Gehrig’s disease. He is now 100 percent disabled from ALS, but this has not rattled his mind, which is as clear and sharp as ever. He studies the military, politics, and the media incessantly and reports that which the mainstream media continually ignores due to potential harm for their owners’ corporate profits. Paralyzed, May’s voice is heard through his computer terminal, which relays his reports to websites and publications willing to advance the truth. He also spreads his messages via radio interviews. As a former intelligence officer who knows how propaganda works in high places, he has often warned the public of false flag possibilities, and has been proved to be on target. He understands the codes used by the power elite to secretly exchange information, and has revealed them to the American people, whom he has served above and beyond the call of duty. His measurable actions have saved this Republic many times.

Retired Army Intelligence professional, Sergeant First Class, Donald Buswell, in his endorsement of the initiative, carried on his page this Facebook entry about May:

“He served for over two decades in the U.S. Army, Army Reserves and the National Guard. As a military intelligence officer, he was a Russian-fluent expert on the Soviet military. He was also qualified as a WMD expert and public affairs officer. He spent his last five years of service with Houston’s 75th Exercise Division as an Opposing Forces (OPFOR) specialist, later serving on the division’s general staff. Afterwards he began a career as a ghost writer for NBC News, PBS and VIP clients. His essays have appeared in The Wall Street Journal, the Houston Chronicle and Military Intelligence Magazine. Since becoming a 9/11 truth activist, he has been widely published and interviewed by both mainstream and alternative media.”

The entry continues with a quote from Capt. May:

“Although I had been a lifelong Republican before the invasion of Iraq, White House coverups of major military events radicalized me. On Dec. 21, 2003, I published a website declaring myself to be on a mission of conscience against what I had determined was a criminal presidency. A couple of months later I met an honorable Marine Corps officer who had witnessed 9/11 and its cover-up in New York City. Captain Jeff Cross caused me to re-examine my previous belief in the official conspiracy theory that Osama bin Laden and Al Qaeda were the 9/11 perpetrators. I became a dedicated student of false flag terror and soon realized that 9/11 had certainly been carried out by the Bush administration to establish a domestic Homeland State and a foreign Global War, both of which were to be perpetuated, if need be, by a repeat false flag terror attack even worse than 9/11.”

The Iconoclast joins others on the Internet and in circles of power who know by experience that Captain May has an uncanny ability to correctly interpret what is really going on and to accurately predict what will happen next. Because of his incredible dedication to truth and to our country, we wholeheartedly endorse his being awarded the Congressional Medal of Honor and encourage the public to go live in supporting such a demand by contacting Congress and firmly asking for its consideration.

For more about Captain May, here are four links of interest:

(Originally published in The Lone Star Iconoclast as Captain Eric H. May Deserves Congressional Medal of Honor on February 2nd, 2010.)
ATTENTION READERS
Due to the nature of independent content, VT cannot guarantee content validity.
We ask you to Read Our Content Policy so a clear comprehension of VT's independent non-censored media is understood and given its proper place in the world of news, opinion and media.