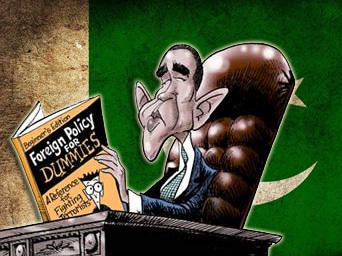 Pakistan was coerced by USA to ditch friendly Taliban regime led by Mullah Omar and help the US forces and their allies to capture Afghanistan by providing airbases, logistic support and intelligence sharing. Pakistan is now again being pressured to help the US-NATO forces stuck in Afghanistan move out safely. The US expects Pakistan to render all out assistance so that it could terminate its endgame suiting its requirements. It is nourishing high hopes despite the fact that having given a raw deal during its ten-year alliance. It wants Pakistan to ignore its security concerns against its arch foe India and its economic collapse and to rush all its forces towards the western border to fight anti-US militants and help the US in converting its sure defeat into victory. Pakistan has gone out of the way to meet it’s never ending demands and has been putting up with its overbearing, accusatory and discriminatory attitude without a murmur and has suffered immensely.

But for capture of Mullah Baradar, Raymond Davis incident followed by US raid in Abbottabad to get Osama and 22 May terrorist attack on Mehran naval base in which foreign hand was distinctly visible, Pakistan would have continued with its policy of appeasement and continued to do more unquestioningly. The three incidents, which had multi-dimensional negative repercussions on Pakistan’s security made Pakistan cautious and vigilant. This changed the dynamics of Pak-US relations since Pakistan ended its ‘Yes Sir’ syndrome. While Pakistan complained that 2 May assault amounted to stabbing an ally in the back, the US contended that Pakistan had been sheltering the most wanted man for over five years. It widened the trust deficit between the two allies and strained relations, forcing Pakistan military to take requisite measures to prevent recurrence of Abbottabad like incident. Additional steps have been taken to guard the western border to prevent cross border infiltration by terrorists as well as aerial violations.

Diplomatic immunity was sought for Raymond Davis who was a double murderer and an agent of CIA. He had obtained visa and entered Pakistan by giving false information. Every American official including Obama shamelessly declared him a diplomat. Immense pressure was mounted on Pakistan and they all hummed with one voice that Raymond was a diplomat and enjoyed diplomatic immunity; hence he couldn’t be arrested or tried irrespective of gravity of crime committed by him. Going by this logic and yardstick, one wonders why the US forgot this legally binding clause of international law in respect of Mullah Abdul Salam Zaeef from Afghanistan serving as Ambassador in Islamabad in 2001. He had neither gone into hiding after the downfall of Taliban regime in Kabul, or had become part of resistance movement against USA, or had talked against USA. Pakistan had yet not annulled its diplomatic relations with Taliban. His Excellency Ambassador Zaeef was roughly handled and then humiliated and beaten blue by American soldiers at Peshawar airport. Zaeef has penned his heart-wrenching five-year ordeal in Bagram and Gitmo jails in his book ‘My Life with Taliban’.

Pakistan still remains committed to US imposed war on terror despite the US blatant discriminations, betrayal and stoppage of Close Support Fund. It however desires defined terms of engagement. What it seeks is that instead of being taken for granted or treated as a mercenary and misused to achieve US strategic short-term objectives only, it should be treated with deference and its sovereignty respected. It pains Pakistan to see the US heavily tilted in favor of India and Afghan regime. Pakistan is principally right in asking for a long-lasting relationship based on mutual trust since the two have been in alliance since 1953.

It is a recorded fact of history that Pakistan put its national security at stake to help the US achieve its strategic objectives in this region. Pakistan was instrumental in making USA the sole super power. Even now it is performing the duties of frontline state to the best of its abilities and has suffered the most. Its performance stands out among the 49 countries taking part in global war on terror. It is simply frivolous and mean on part of Washington to mistrust Pakistan, which sailed with it through thick and thin and never let it down. The outcome of the war would have ended up in favor of USA had it placed full trust in it rather than distrusting it and trusting untrustworthy India and Israel.

Pakistan is insisting on new terms of engagement since it strongly suspects that like in 1990, the US will again leave Pakistan in a lurch once its forces safely exit from Afghanistan. In the Afghan Jihad against the Soviets in 1980s, the US had remained extraordinarily friendly to Pakistan till the defeat and withdrawal of Soviet forces. This time, the US started showing its ugly face midway and has kept Pakistan on the leash. It is quick in putting new demands and pasting variety of unsubstantiated allegations and in applying high handed tactics, but miser in giving financial assistance.

Within Pakistan, the biggest irritants for USA are the Army and ISI. Venomous Bruce Riedel who never stops dreaming fragmentation of Pakistan is now insisting that Pak Army should be reined in and prevented from maintaining control over Pakistan’s strategic policies. He has recommended drastic cutting of military assistance to Pakistan. Stephen Cohen and scores of others in USA also have similar thoughts.

The US wants Pak Army to start a major operation in NW to serve its interests without caring for its socio-politico-economic and security interests. Military operation is not as simple as the US is figuring out. It entails collection of combat troops from elsewhere, training and acclimatizing them, and arranging extra resources to sustain them. The clash would result in large size displacement of locals. Both sides will suffer heavy casualties. It will result in destruction of private property and collateral damage to civilians refusing to vacate their homes. Militants would find an alternate refuge and continue with their militancy. It will unite all factions of militants including Afghan Taliban against security forces.

The US want Pakistan to fully share intelligence about Haqqani network (HN) and other Afghan Taliban leaders allegedly based in Pakistan so that it could target them with drones. It also wants choking off money and supply routes of militants and to get hold of couriers. This one-sided intelligence is however not to be reciprocated by CIA by providing intelligence about anti-Pakistan elements. Reason propounded by CIA for carrying out unilateral drone strikes without taking Pakistan into confidence is that the intended prey slips away whenever advance information is passed to Pakistan. This harsh policy has finally been revised and the US has now agreed to provide advance information about the date of intended strike and target. It has also been agreed to halt strikes when Pak officials are in the US. Although it is a positive development, it is certainly not the remedy. Not only drone breeches Pakistan’s sovereignty, it kills nearly 97% innocent civilians, which in turn fuels terrorism and extremism. This mad practice of extra judicial killings should be stopped.

Although the US has declared HN as the most dangerous outfit, yet it has so far desisted from declaring HN a terrorist outfit. Despite hitting suspected targets of HN in NW and launching a military operation in Khost, the US wants Pakistan to facilitate talks with HN. Instead of calling Pakistan an ally as well as a target, Hillary Clinton clothed it in diplomatic words by saying that Pakistan was ‘both a partner and a challenge’. The US Congressman Gary Ackerman however, bluntly stated that ‘Pakistan is not our friend; not our ally or our partner’. He has desired complete rethink of Pak-US relationship. It is Pakistan which needs to rework its US centric foreign policy.

About the writer: Brig Asif Haroon is a retired Brig and a defence analyst. Email:[email protected]