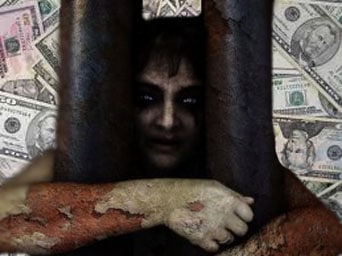 Millions of productive and mostly rational Americans are depressed, and furious because the great “American dream” became a nightmare. This series has pointed out how it came about via diabolical conspiracies. We must remember the adage: Where there is life, there is hope.

I have tried vainly to influence propagandized and programmed Americans, to little avail; for example the following is a letter I submitted to our local newspaper on Aug. 16, 2009:

Apparently many Americans believe the propaganda that claims there never were any Palestinians living on the land now occupied by Israel. Sadly, naive Americans do not know the history. I beg to differ.

This big lie began at the end of World War I. The Balfour Declaration, used to establish modern Israel, was one of the most deceitful statements ever penned. Here is the third clause of that 67-word document: “…it being clearly understood that nothing shall be done which may prejudice the civil and religious rights of non-Jewish communities in Palestine…”

Non-Jewish communities indeed—In 1918 the British divided “Palestine” into 644,000 Arabs and 56,000 Jews. The vast majority of those 56,000 were newcomers from the Zionist movement.

The Ottoman rulers of the area for 400 years prior to 1917 did not in any way alter the traditional Arabic/Semitic culture of the people of Palestine. The small Jewish and Christian minorities lived in peace with the majority.

Israeli Prime Minister Golda Meir cemented the lie in 1969 with an awkward statement about Palestinians that ended: “They did not exist.”

If one lives in America, he’s American; if in Canada, he’s Canadian—so why are people traditionally from Palestine not Palestinians?

So-called Christian Zionists, ignoring history and twisting Bible verses have from the pulpits supported this historic lie to benefit the imbalanced support of Israel by American taxpayers.

To paraphrase Jesus in Matthew 23:15: Believe the liars and proselytizers and be twice-fold the child of hell as they are.

Establishing control of the blossoming world of oil export was only half of the goal of the Crown in the machinations following both WWI and WWII.

The two world wars were apparently all one manipulated global-changing activity. Today, the Internet is chock full of information about the banking conspiracy, and the Zionist Conspiracy; there is little about the “Crown” conspiracy, which embodies both, big time.

To fully understand where we are going, we need to delve into a little modern history of Institutional Churchianity because it is the combination of Jewish Zionist and Churchist Zionist belief systems that provides the political base for America’s unfettered support of modern Israel and the never-ending wars of insanity and oil we live amidst today.

In a recent column, I mentioned how far back in Christian history the notions of millennialism go, finding evidence that very early writers cited it. I learned that the Catholic church vetoed the 1000 year earthly reign at the council of Ephesus long ago nevertheless Protestants renewed it big time into the 19th century— by Crown design. Isms Can Drive Us Nuts! What Is Chiliastic Millenialism?

Christians generally believed Jesus Christ completed his father’s work. The Jews have always vehemently denied it, generating an implacable wall. Then along came the modern (1800) millennial revolution, fomented by the Crown in England called Darbyism or the Brethren (a name straight out of Masonry).

This was a revolution that changed Christianity as thoroughly as the industrial revolution had changed man’s ways of life—ironically, the two unrelated revolutions grew together in the 1800’s. Secular history taught in schools deliberately ignores the millennial revolution for what it really is, but one need only read an excellent book: Death of the Church Victorious, by Ovid Need Jr. to get the entire well-documented story.

The so-called Brethren movement actually caught on more in the United States than it did in its native UK. The US fervor for evangelism was made to order for the Crown, and they took full advantage of it. An itinerant American lawyer named Cyrus Scofield obtained backing for the Scofield Teaching Bible from some very interesting sources.

In the US it was Arno C. Gaebelin, a Zionist who published a periodical” Our Hope”, in 1894. Gaebelin, a converted Jew proclaimed the imminent but non-scriptural Second Coming of Christ and alerted gentiles to the remarkable Zionist awakening among the Jews of Europe.

Curiously, the Scofield Teaching Bible in which the copious margin notes reverse what is written was first published by Oxford University Press in England thanks to a financial angel named Untermeyer (with known connections to the Crown). Oxford is hardly a religious publisher, so it was out of character for this highly connected institution to publish a “Bible.”

Though few among Churchists know what the words mean, Millenialism and dispensationalism are very popular today, but they are anti-Christ while pretending to be Christian. These non-scriptural doctrines actually make the advent of Jesus Christ of non-effect, and virtually “Judaize” Christianity—hardly any churchist today sees this because the ministers have all been trained in Scofield heresy at the major Bible schools. It required concerted clout and money to bring this about, which is the sure tipoff that the Crown was behind it. A Lifelong Pastor Sees Where He Was Wrong

So, as Christianity came into the radio, and eventually the television age, the predominant point of view was and is anti-Christ Scofieldism, carefully cultivated by powerful forces behind the scenes

When I wrote the report in 2003 The statements about what was available via Google and the Internet were true and readily verified, but today, no! I leave it as originally written:

You can also find an important booklet by Charlie Samples by searching Google for Sample’s book: The Greatest Hoax; A Study of the Inconsistent Theology of Modern Bible Prophecy. By reading Charlie Samples you will get a clear picture of the diabolical plot to use churchists against Christianity and truth.

( refuting the Schofield idea of a “Second coming” will require yet another column, coming shortly with help from Charlie Samples, whose work is no longer on the Internet, which is suspicious.)

Now we fast forward to 2004. The most powerful nation on earth, the United States, is embroiled in an expensive, brutal war in Iraq. Our propaganda says that “we” are determined to “free” the Iraqi people from dictatorship and Muslim extremism. The administration of George W. Bush has claimed our motives are defensive and on behalf of the world. George Bush, by his own words, is a repentant sinner and devout follower of Christ. He has not stated a belief in millennialism, but his actions are 100% Christian-Zionist (an oxymoron, but the term used today).

Bush’s major ally in the recent war against terrorism has been the Prime Minister of Great Britain. Neither of them likely knows that they are both representatives of the Crown, more than they are representatives or leaders of the people who elected them.

Were either of these two national leaders to be told outright that their actions were nothing more than a furtherance of the Crown’s goals to control world oil and to establish a center in Jerusalem to be the throne for the Kingdom of God on Earth, they would demand the teller of such a tale be locked away in a straightjacket. They would adamantly deny any such thing, and chances are they would be sincere because they are useful idiots and not part of the directorate—which they likely don’t believe exists.

Is the Crown is a figment of my imagination? Was World War Two not manipulated and used as one gigantic urban renewal project to solidify the Crown’s earthly control? Was the cold war not a game designed to make the Crown’s military industrial complex ever stronger on a worldwide basis?

In order to maintain power over the always restless natives of the earth, the Crown must make sure that all their manipulated governments have an enemy to face or a crisis to manage—else the people don’t need governments that steal their money ”legally” via taxes.

The two political parties are used to keep independent thinking away from a Constitutional government. The Crown generally finances the opposition to its own puppet regimes. Does anyone doubt that International Communism is a Crown device?

When reading history books, you should notice how it is almost always stated in “financial” terms. These are blatant lies, accepted everywhere in academia and controlled media.

For example, the build-up for WW2 in the 1930s is always expressed in financial terms by historians, who suggest that one nation or another could not get financing to build huge, fast naval ships. What a joke! The Crown “created money from air” and loaned it to virtually every nation so nobody had any problem with “financing”

The “useful idiots” accepted this “financial reality” that is anything but real. Recent banking and financial “bailout” events prove this conclusively, which is why the “immaculate they” know the jig is up.