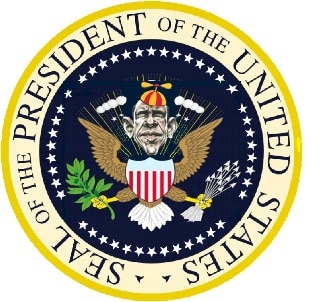 This is the last column of the year. It will be short mainly because the year went by like the snap of the fingers. It has been a memorable one as Veterans continue to fight for the benefits we were promised for signing up to defend the Constitution against all enemies, both foreign and domestic. There are many times I feel we have had our weapons pointed in the wrong direction and that we have let the US citizens down because of all the shenanigans going on inside the Beltway.

Yesterday I receive an e-mail from a fellow Marine regarding a speech made by President Obama back when he was running for office. Its significance cannot be understated and really points out the hypocrisy of our elected officials at all levels. It has been billed by many as the very epitome of what’s wrong in our country:

The Quote of the Decade:
“The fact that we are here today to debate raising America ‘s debt limit is a sign of leadership failure. It is a sign that the US Government cannot pay its own bills. It is a sign that we now depend on ongoing financial assistance from foreign countries to finance our Government’s reckless fiscal policies. Increasing America ‘s debt weakens us domestically and internationally. Leadership means that, “the buck stops here.’ Instead, Washington is shifting the burden of bad choices today onto the backs of our children and grandchildren. America has a debt problem and a failure of leadership. Americans deserve better.”
~ Senator Barack H. Obama, March 2006

The origin of this paraphrase was in 2006 when the Senate was debating a call for votes to raise the federal debt ceiling limit.  He was then a freshman senator from Illinois, and not yet a candidate for Presidency of the United States.

It was an eloquent speech as Mr. Obama has been noted of the delivery but as hollow and shallow as the man himself, and should be a firm warning to all Americans that we must look beyond the rhetoric, false promises, and words that flow from even the most sincere sounding speech. In short, politicians should be judged by their actions, not by their words. This has become the standard fare of all politicians for they know the memory of the citizens will fade, and so few are ever held accountable for whatever they say. Instead of under-promising and over delivering, today’s, political game is to over-promise and under-deliver. Mr. Obama must be held accountable for his actions as well.

Mr. Obama’s speech talked about the fact that having to raise America’s debt limit was a sign of leadership failure. It was a sign that the U.S. Government can’t pay its own bills, and that the need to support increasing the debt limit put America into a position of having to depend on ongoing financial assistance from foreign countries to finance our Government’s reckless fiscal policies. Mr. Obama didn’t stop at this point and went on to put this kind of debt into a prospective most people would understand…

Mind you this was when the federal debt was just a mere $8,965,000,000,000.00. That is money that we have borrowed from the Social Security trust fund, borrowed from China and Japan, borrowed from American taxpayers. AND NOW UNDER OBAMA, WE ARE ABOUT TO GO OVER THE $15 TRILLION DOLLAR MARK! Is this obscene or what?

Don Rumsfeld, on September 10 2001, made the astonishing claim that the federal government simply couldn’t account for $2.1 trillion dollars it has spent, and “Its own auditors admit the military cannot account for 25 percent of what it spends,” reports CBS News Correspondent Vince Gonzales. Is this why the government continues to raise the federal debt limit because they can’t find the money they have already confiscated from the public (now estimated to be about $70,000 for every man, women, and child)? This is old news but worth recounting because things are going from bad to worse and we are nowhere near plugging the leaks yet.

Billions missing from HUD! “At the time we discontinued our audit work… An additional 242 adjustments totaling about $59.6 billion, were made to adjust fiscal year 1999 activity.”

What does this mean? A great website for all to check occasionally, especially just before going to your designated voting locations, is http://whereisthemoney.org/. If this doesn’t get you mad, fired-up, tee’d off, or other equally descriptive soliloquies, then perhaps you have become the problem and not government.

Trillions of dollars in “unsupported adjustments” means trillions of dollars unaccounted for. What’s going on? Where is the money? How could this happen? Where are the checks and balances? How much more has gone missing? Is this happening in the other government agencies too? What would happen if a corporation failed to pass an audit like this? Or a taxpayer? Who is responsible for this? Who can we trust to fix it?  YOU THE VOTERS ARE THE ONLY ONES WHO CAN FIX THE PROBLEM.