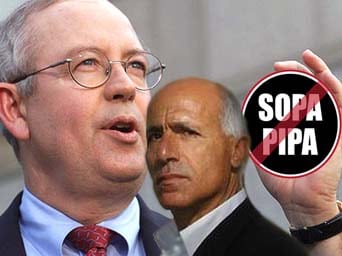 If Congress passes the Stop Online Piracy Act (SOPA) it will allow the government to censor as in blocking of sites deemed to be trafficking in copyrighted intellectual property and counterfeit goods.

YouTube would likely be shut down if the bill becomes law and activist reporters would be silenced due to censorship of the Web, which is also a violation of Americans First Amendment which prohibits the making of any law respecting an establishment of religion, impeding the free exercise of religion, abridging the freedom of speech, infringing on the freedom of the press, interfering with the right to peaceably assemble or prohibiting the petitioning for a governmental redress of grievances.
A First Amendment case that has been flying under the radar screen of the mainstream media is the ongoing persecution by the current President of Baylor University, Ken Starr [former prosecutor of Bill Clinton] and censorship as in dismissal of Dr. Marc Ellis.

For over three decades, Jewish Liberation theologian Marc Ellis has influenced academics and social justice activists in solidarity with equal rights and freedom for Palestinians.

“Professor Marc H. Ellis has sought to rescue the Jewish ethical tradition in the face of the demands of the 20th and now 21st Century. In his early career, he became deeply interested in Holocaust Theology and Liberation Theology as a reflection on and expression of the mores of the Judeo-Christian tradition when faced with the socio-political-economic crises and genocidal assaults of oppressive nation-states and the international political and economic order. Over the years Professor Ellis has translated that expression of ethical values into an understanding of the Jewish ethical tradition, now facing its own moral crisis as Jewish identity becomes increasingly uncritically identified with the governmental politics of America and Israel.”

The politics of America and Israel are one reason why, Israel’s Nuclear Whistle Blower, Mordechai Vanunu is still not free and come July 2012, Vanunu begins another historic trial regarding the appeal he registered in July 2011 to revoke his citizenship under a law Israel passed in 2011:

This April 21st marks eight years since Vanunu emerged from nearly 18 years in a solitary tomb sized windowless cell and he immediately began breaking the restriction that Israel had imposed on him not to speak to foreigners by telling the Press, “I am not harming Israel. I am not interested in Israel. I want to tell you something very important. I suffered here 18 years because I am a Christian, because I was baptized into Christianity. If I were a Jew I wouldn’t have all this suffering here in isolation for 18 years. Only because I was a Christian man.”

Vanunu also addressed the “cruel, barbaric treatment” he endured under the Mossad/Shabbak who “control the prisons”, Western collusion in Israel’s WMD Program, his kidnapping and called to all the leaders of the world to demand Israel “open the Dimona reactor for inspections.”

Because Vanunu spoke to foreign media in 2004, Israel sent him back to solitary confinement for 78 days in the summer of 2010-the outcome of his freedom of speech trial, which began in January 2006. In late 2010, Vanunu moved from east Jerusalem to Tel Aviv, so he would be “closer to the airport.”

On 18 January 2012, Vanunu moved back to east Jerusalem to wait for his next historic trial scheduled to begin in July, but if SOPA had already been passed, comments such as the one left on Vanunu’s YouTube Channel by former Marine and ex-pat American, Ken O’Keefe could not be read:

Love and respect to you my brother, I am so sorry that remain a prisoner and I am sorry that I have not done more to support your plight. Please know that you have inspired me deeply and that countless other_ people feel exactly the same as me. I hope to see you free this year my brother, I hope to be with you and share your company as much as possible. TJP, Ken O’Keefe

One need not be on Facebook to support freedom of conscience and speech, Marc Ellis or Mordechai Vanunu, but if you are please join: