Home WarZone Yet Another War for Israel 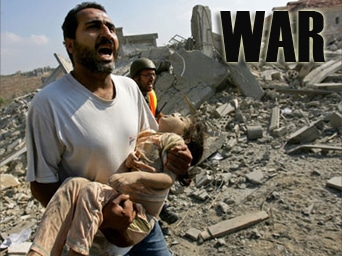 “Men use thought only to justify their injustices, and speech only to conceal their thoughts.”
(Voltaire: Dialogue XIV, Le Chapon et la Poularde)

Voltaire’s wit often illuminates truth. Consider this revealing “thought” as expressed recently in Alert, the voice of AIPAC to its membership:

“Some Americans believe if the Israelis strike Iran, the U.S. will pay the political costs anyway, so it would be better for the Americans to do the job and do it properly.

Their clock is a bit different from the one the Israelis hear. Because of their vastly superior firepower, the Americans could strike Iran later, more devastatingly and more sustainably.”

How just is it for AIPAC’s mouthpiece to declare that America should “devastate” Iran because it has “vastly more firepower” than Israel and could “do a better job” and “do it properly,” as though this were a clean-up “job” of a waste dump and not an illegal invasion of a member country of the United Nations.

It has also done nothing under international law to threaten the U.S. much less attack it, while the Israeli government and its IDF look on happily content that it is American boys and girls suffering the consequences of the unwarranted attacks and not Jewish boys and girls?

Has it come to this, that unnamed Israeli spokespeople, voicing AIPAC’s policies, determine what nation the U.S. should invade without consultation with the representatives of the American people?

Not that this sentiment has not been expressed before. Netanyahu told Piers Morgan the same thing in an interview last year, as I have quoted in previous articles, noting Israel’s Zionist government’s desire to use America’s military as their own claiming that what is good for Israel is good for America.

That protestation completes the wit contained in Voltaire’s quote: because Israel is America’s only friend in the mid-east, and the only Democracy, and the only nation in that part of the world aligned with the west, it alone deserves America’s “unquestionable” and “unbreakable” support.

Speech that conceals fails to mention that being Israel’s “only friend” has made the U.S. a pariah among nations in the world and made its touted “Democratic freedoms” a laughing stock.

The other nations in the UN watch America “support” the Zionists’ agenda to attack Iraq and Lebanon and Gaza, abort international law as it, like Israel, commits extrajudicial executions in foreign states, equips Israel when it invades its neighbors to the north and attacks peace activists aboard vessels from peaceful nations including Turkey.

And it ironically sits silently by as Israel dismantles what little of a democracy existed in that nation by creating new laws that deny full citizenship to anyone not a Jew.

Thus have we become a nation supportive of a militaristic Theocracy while we continue to mouth the principle of separation of church and state, a principle founded on tolerance, concealing the truth that there are more than 20 great religions with well over a billion people who accept no religion (Adherents.com) all of whom deserve recognition and, as necessary, support from America.

Clearly Israel’s needs are not America’s needs if we mean by that more war in the mid-east. Have we pulled our troops from Iraq just to move them into Iran? Does any sensible person believe that the Iranians have a “need” or desire to attack the people of the United States? Our forces completely surround Iran.

We are the nation with atomic weaponry, not Iran. What possible good would Iran achieve by having a nuclear weapon? Hasn’t Iran signed the Nuclear Non-Proliferation Agreement while Israel, who damns Iran for its nuclear “ambitions,” has an arsenal of nuclear bombs and has refused to sign the Nuclear Non-Proliferation Agreement. Which of these nations is to be feared? Iran has never attacked a neighbor; Israel attacks and occupies its neighbors at will.

Have the Iranians reason to fear control of the U.S. military by Israeli operatives using this nation as its power because Israel wants to devastate Iran the way Iraq has been devastated? Yes. Israel’s ultimate goal is control of the mid-east by surgically cutting it into small indefensible sections that can be dominated by Israeli money and American forces.

It would appear, however, that Israel fears America does not desire to follow Israel’s advice to “take out” Iran the way they convinced the Bush administration to “take out” Saddam Hussein. Hence the constant barrage that characterizes Iran as a warlike state set on wiping Israel off the map and becoming the dominant power in the mid-east.

It’s time, I believe, for the U.S. and the UN to consider how to avoid yet more devastation in the mid-east, not by expanding military operations there but by seeking peace through negotiations and cooperative support for the people of the mid-east. Both Israel and the United States must confront the reality on the ground today that they no longer have control over the people of the mid-east, and recognize the colonial drives that Zionism had designed for Israel are no longer tenable.

While Israeli control of America in the form of Las Vegas billionaires buying the presidency continues in the United States, and Republican candidates crawl to the altar of Mammon to remove Obama, who has already sold his soul to the forces of Evil, the people of the world look on in disbelief, having witnessed for sixty years the dominance of Zionist deceit, treachery, and manipulation of America as it savaged the mid-east in the name of friendship, democracy and shared values.

But now, they have moved to take control of their own lives as they watch Israel corrode from within as it metamorphoses into a tribalistic, superstitious people further isolating themselves from the community of nations.

Can they not see that the people in Tunisia, Egypt, Libya, Syria, Pakistan, Afghanistan, and, arguably, in Yemen and Saudi Arabia have had enough of dictators imposed by the U.S. and Israel to control their governments;

Can they not see that Turkey broke with the Zionist forces that demanded compliance with their rule regardless of international law and due respect for neighboring nations;

Are they blind to the Jordanian efforts to take seriously their role as a Palestinian neighbor; do they not see that the people of Egypt have made possible the opening of Israel’s illegal siege of Gaza, that the people of the world have given notice that they will not cease to break that siege with boats entering Gaza through international waters,

— that the Iraqi people have made clear that they will not cave in to America’s continued control of their country by proxy power,

–that the peoples of Britain, the United States, Canada, and Australia have openly condemned Israel’s injustices to the Palestinian people regardless of their governments paid presidents and prime ministers that claim otherwise;

Have they stood by blind to the French Parliament’s Foreign Affairs Committee issuing its recent report condemning Israel’s apartheid practices against Palestinians in the West Bank, blind to Secretary Ban’s clear call to Israel that it must withdraw from the occupied territories, blind to the European Union as it issued its recent report critical of the Israeli government’s on-going occupation and settlement of Palestinian land,

Blind as well as Russia, China, Iran and numerous other mid-east nations put into practice what they have agreed upon by resorting to other currencies than the dollar to be the international means of finance;

Unable to see that once the people of the world have had an opportunity to view the critically acclaimed, dramatically powerful, passionately presented film, The Promise, by director Peter Kosminsky of the United Kingdom, where the inhumane policies of the Zionist criminals erupts in all its unguarded ferocity, the veil of respectability will be removed from Israelis’ atrocities for all,

And blind, totally blind to the United Nations as it acts upon a resolution to recognize the rights of the Palestinian people to a state of their own, must they not see, both Israel and its people, as well as all Americans, that they must accept the reality that no single nation can force its will on all other nations with impunity; that time is over.

Clearly Israel’s militaristic approach to neighborliness does not work. Israel fears “delegitimization,” it fears boycott, divestment, and sanctions (BDS), and it fears total isolation from the world’s communities.

Should the U.S. become financially incapacitated through the devaluing of its currency, should it not be able to create adequate jobs for its citizens, should its investment in Israel estimated at $8.2 million per day for a population that is approximately 7 million impair its stability, should the people of America awaken to the control AIPAC has over their President and representatives and the total disregard of America’s security as a result, then Israel could lose both the American veto that has protected it from world condemnation of its policies and America’s military support for its aggressiveness against its neighbors. 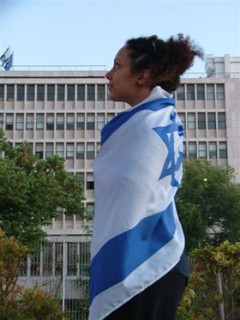 That would leave Israel isolated, wrapped in fear, and psychologically unstable. Israel’s alternative can only be constant instability, never ending terror and war, hatred by their neighbors, innate, simmering self-hate, and mental anguish resulting from exclusionism that leaves open wounds of distrust and self-questioning, a state terribly close to insanity.

Is it not time for Israel to seek peace with its neighbors? Since no sensible person in the mid-east believes that the U.S. can act credibly as a broker for peace, Israel must seek other partners from the UN who can serve that purpose. It must be willing to accept as a premise for peace, justice as defined by the UN’s International Courts and the Universal Declaration of Human Rights.

It must understand that the occupied territories must be returned to their native inhabitants, that the Partition Plan of November 1947 must be a basis for negotiations if only to provide a foundation for equitable land for both peoples. Modification of land distribution could follow as well as a means of providing for the rights of those displaced in the Nakba. The world peace body could serve to protect both peoples as generations come and go until a free movement of all is possible.

Then perhaps we could say, men use thoughts to find justice and speech to communicate it.