Home Government We Can Stop The Machine, If We Want To 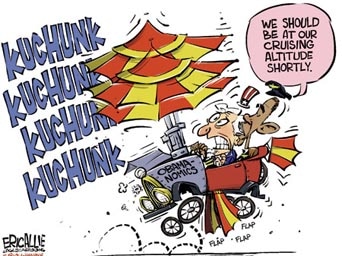 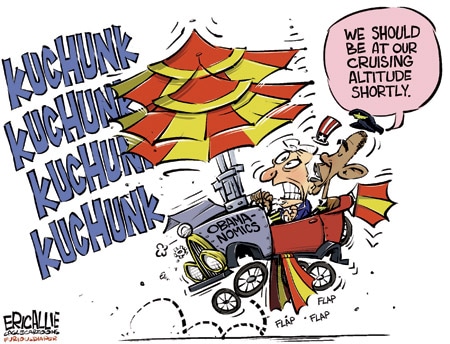 As Obamanomics continues to attempt to get airborne on outmoded top down debt fueled economics and presidential wishful thinking ~ Americans must realize that we can shut down this dilapidated greed machine if we want to by just saying no more, facing financial reality and stop playing the debt driven game.

“There is a time when the operation of the machine becomes so odious, makes you so sick at heart, that you can’t take part; you can’t even passively take part, and you’ve got to put your bodies upon the gears and upon the wheels, upon the levers, upon all the apparatus, and you’ve got to make it stop. And you’ve got to indicate to the people who run it, to the people who own it, that unless you’re free, the machine will be prevented from working at all!”  –  Mario Savio – Sproul Hall, University of California, Berkeley on December 2, 1964.

Look no further than Greece to see the final result of universal greed and unregulated debt driven securities which overhang the entire world economy.

As Ellen Brown writes in her Web Of Debt Blog ~ “There is one bit of bad behavior that Uncle Sam himself does not have the funds to underwrite: the $32 trillion market in credit default swaps (CDS).  Thirty-two trillion dollars is more than twice the U.S. GDP and more than twice the national debt. CDS are a form of derivative taken out by investors as insurance against default.  According to the Comptroller of the Currency, nearly 95% of the banking industry’s total exposure to derivatives contracts is held by the nation’s five largest banks: JPMorgan Chase, Citigroup, Bank of America, HSBC, and Goldman Sachs.  The CDS market is unregulated, and there is no requirement that the “insurer” actually have the funds to pay up. CDS are more like bets, and a massive loss at the casino could bring the house down.”

Unless it’s a rigged shell game as Ellen Brown explains ~  “ It could ( Crash  , at least, unless the casino is rigged.  Whether a “credit event” is a “default” triggering a payout is determined by the International Swaps and Derivatives Association (ISDA), and it seems that the ISDA is owned by the world’s largest banks and hedge funds.  That means the house determines whether the house has to pay. The Houses of Morgan, Goldman and the other Big Five are justifiably worried right now, because an “event of default” declared on European sovereign debt could jeopardize their $32 trillion derivatives scheme.  According to Rudy Avizius in an article on The Market Oracle (UK) on February 15th, that explains what happened at MF Global, and why the 50% Greek bond write-down was not declared an event of default. If you paid only 50% of your mortgage every month, these same banks would quickly declare you in default.  But the rules are quite different when the banks are the insurers underwriting the deal.”   See Ellen Brown Post ~

The credit default swap or CDS has become the cornerstone product of the credit derivatives market and a derivative is essentially a fancy way of saying that a bet has been made. Originally, these bets were designed to hedge risk, but today the derivatives market has mushroomed into a mountain of speculation unlike anything the world has ever seen before. Estimates of the notional value of the worldwide derivatives market go from $600 trillion all the way up to $1.2 quadrillion.

Please note that a quadrillion is 1,000 times a trillion. According to one of the world’s leading derivatives experts, Paul Wilmott, who holds a doctorate in applied mathematics from Oxford University, $1.2 quadrillion is the so-called notional value of the worldwide derivatives market and to put that in perspective, the world’s annual gross domestic product is between $50 trillion and $60 trillion.

So that’s the 600 pound derivatives Gorilla that is looming over Greece and the world economy. Incidentally, America’s Per Capita Government Debt is worse than Greece, as well as Ireland, Italy, France, Portugal, and Spain. See Chart :

A perfect example of this high stakes shell game being played out right now is the current Greek debt crisis. After a year and a half, Europe has agreed to something that might not work at all and, in the best case scenario, will take eight years to reduce Greek debt to a level that is still too high. Hopefully …. And why? Because the Houses of Morgan, Goldman and the other Big Five could get wiped out if Greece defaulted.   See 4 minute video      The Greek Debt Crisis: It’s, Like, Totally Over

Meanwhile the Regime Change War Machine chugs on with Syria now in our sights ~ while our economy continues to stutter.

Just like Libya, the Main stream media is more than happy to tell us about the very real violence that is taking place in Syria, but they neglect to tell us who is really behind it.

They told us that the Libyan leader, Muammar Gaddafi, was strafing innocent “protesters” with helicopters, but now we know he was fighting armed groups in league with Al Qaeda and the West.

Now we find it’s more of the same propaganda in Syria along with Hillary Clinton hypocritically accusing Syria of crimes against its own citizens.

The violence is real in Syria, but who’s behind it? Webster Tarpley, who has been there, has the answer and I bet you can guess the answer….  the CIA and the West again.

On the subject of America’s ongoing lies and propaganda ~

If you watched the Super Bowl game you saw this ad…well not quite this exact same ad, but if the ad had been truthful ~ this is what it would have said.

Clint Eastwood … Chrysler … put through the truth ringer… and minus the patriotic blather for the masses ~ because it’s no longer half time in America ~ it’s more like the last two minutes ~ and the only presidential candidate who understands this is Ron Paul.

Finally. Here Is A Must Watch Short 22 minute Video which explains the false premise of American exceptionalism and why we must now face the music and face reality. We must take action and become the friction to stop the imperialistic predatory capitalistic machine before it consumes us and our precious liberties ~ that is, if we really want to. So how do we stop it?  Stop feeding into its outmoded and badly stuttering debt engine ~ without which it cannot fly.

A brief and crucial history of the United States.   Video 22 minutes

“Our country is now geared to an arms economy which was bred in an artificially induced psychosis of war hysteria and nurtured upon an incessant propaganda of fear.” General Douglas MacArthur