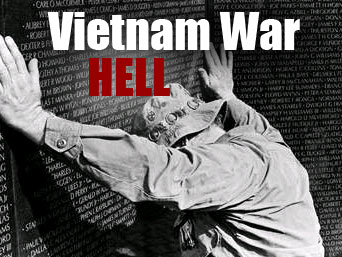 History Repeated, Was What.

An E-mail debate about of the details of the Vietnam war crossed my mail via Dick Fogut a noteworthy octogenarian patriot and friend responding to Kevin Barrett. Who wrote, among other things:

“I researched public opinion data long ago and discovered that the vast majority of the Vietnamese people wanted to re-unite under Ho – which is obvious from the fact that a tiny country defeated a gigantic superpower. The South Vietnamese regime was just a French-created, US maintained front of quislings, traitors and whores.”

“Kevin, I was very “busy” back then, attempting to refute the media lies about Diem. Diem was NOT a creature of the French so far as I understood. When he set up his government in the South, he DISMISSED all the Toady officers who had served under the corrupt French. It was from among those that foolish Kennedy paid to overthrow Diem (Kennedy having believed the propaganda from the New York Times and TV networks that demonized Diem as a prudish and anti-Buddhist man, very unpopular with the people, so couldn’t win the war. Diem WAS unpopular with those in Saigon, but just the opposite out in the villages, despite what you’ve apparently read).

“Be practical…the proposal of having the entire populace of BOTH halves choose between Diem and Ho, would have been a farce back then. North Vietnam (allowing no international observers) would produce a 100% vote for Ho (no matter what its people actually desired.) The democratic vote in the South, observed by UN people and media, would have been divided. Even if a majority in the South voted FOR Diem (recall, several million Catholics fled south after Ho took the North from the French), the combination of a minority vote in the South and 100% in the North, would have “won” for Ho.

“Diem did NOT want the American “advisors” Kennedy desired (and did insert)! He wanted our military aid, but NOT us “taking over” his country — as Kennedy’s Gung-ho advisors wanted to do. He reluctantly caved to Kennedy’s demands.

“As Marguerite Highness [and others) reported, a relatively limited guerilla war between Ho and Diem, was suddenly escalated into a full scale blood bath as our immense American firepower increased AFTER Diem was murdered — and our military took full command, inserting hundreds of thousands of our troops into then demoralized South Vietnam.”

“You may dispute the truth of what I wrote that Higginss said the Viet Cong leaders told her later, that the 15,000 each month defections of Viet Cong to Diem’s side, had convinced Ho he could not win the south by FORCE. He was privately conferring with Diem about a cease fire. Did Higgins LIE?

“Our Zionist dominated major media even back then, (behind the scene) “philosophically” sided with the Communist/Marxist side winning. Their Bolshevik “brethren” had not yet been completely shoved aside in Russia by native born, non-Jewish Russian Communists.

“Every public demonstration here in America against “OUR side” in Vietnam, no matter how small, was massively publicized by the TV networks. (The favorable, pro-American – “musical” demonstrations – at the same time, by Moral Rearmament, often to much larger crowds, received not a moment of reporting by the same media). This is the same treatment as we observed about Iraq and now Iran, whom the media owners want destroyed. The media Zionists, (no longer concentrating on favoring Zionist Marxism), are busy promoting the agendas of their cherished “homeland,” the state of Israel.

“As RENA VALE (the FBI’s plant in the Hollywood Communist Party who exposed the “Hollywood Ten” to Congressional committees) told me in 1952 when I was stationed with the Air Force near Detroit, MOST of the leaders (the “royalty”) of the American Communist Party she had personally met in America, were American Jews. (I illustrated the cover of her 1952 book about them, titled: “THE RED COURT.”)

“When the old Bolsheviks and their children, were forced out of power in Russia (MANY emigrating to Israel) the Party leaders here, also Zionists, abandoned Communism, to became full time advocates for Zionist Israel.”

There is enough to chew on in those paragraphs to keep old vets remembering things our history liars never told for a long time.

Prouty observed the physical start for the planned new wars (Korea and Vietnam) while flying above Okinawa in 1945, and he had already witnessed the political beginnings as a pilot who flew delegates to the famed Tehran conference of really big wheels (banker puppets) Churchill, Chiang, FDR and Stalin in 1944. hCol. Fletcher Prouty, Witness to Power, History, and Corruption

The more things change, the more they stay the same!

The British Empire ran the world on behalf of bankers and investors for nearly 300 years through the high cabals of finance in The City of London, about which I have written much. History of Money, War—All damned Lies! Part One:

It bears repeating. The financial cabal types under British Israel/ Masonic philosophy never stopped licking their chops after they saw all the debt/financing money they could count on from wars.

The “military/Industrial complex” they had installed in the various sovereign states never took time off. These moneychangers put their lobby to work on their selected puppet leaders and constructed the great “cold war” scam of the 20th century.

Mammon’s greed formed the uterus that birthed all the war money bubbles of the last century. Elections and political leaders were for show and tell only.

In Vietnam as always, investment opportunities were the driving forces. Prouty relates how a representative of First Bank of Boston came to his office in the Pentagon to query about the use of helicopters in the “next” war.

And after learning that thousands of choppers were planned, the bankers invested in the manufacturers of these flying targets. We, the enslaved American producers/taxpayers, lost more than 5000 such craft in Vietnam, so the investment paid off, big time.

The two-party system churned up the lying propaganda without missing a beat, and we are still in the costly rut.

In 1954, my ship The USS Bexar APA 237 went up the river to Hanoi to evacuate Americans, so somebody knew damned well what was planned.

It is “common knowledge” among the somewhat informed, that Eisenhower seriously considered dropping an atomic bomb on the “communists in Laos back in 1947. He declined to follow up.

And this incident may have helped his speech writers come up with his famous warning agains the Military Industrial complex, Who knows? Ike was certainly not a “good guy’ based on what took place in Germany with so many “other Losses” among Germans interred; and we must not forget his double cross of the Hungarian freedom fighters.

Is this too much information?

Somebody gave the order to ship millions of dollars worth of war materials (cannons, tanks, planes even, and ammunition galore) off to both Korea and Vietnam back in 1945 just as the Japanese were signing the surrender aboard the USS Missouri.

Mammon is insatiable. Investment returns must never stop. Let the people eat cake, pay through nose, get drafted to die, consume tons of cheap crap and think they run the greatest country in the history of the world. The money games must go on; only a few knew it was funny money, and nobody seemed to care.

We had housing booms, lots of jobs and could not be bothered to get off the dance floors.

For the really sick details on how “the secret team” pulled everything off, get a copy of Fletch’s first book, The Secret Team then read the horror story of Vietnam in his JFK book.

History lessons like these were never in the curricula of the bleeping establishment. It’s the job of us old fart veterans to teach the kids.

If they don’t learn from history, they may just follow the pied pipers of war and false Gods all the way to Iran. Then hell.