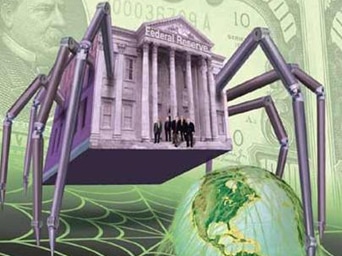 Federal Reserve notes never were money; corporations like Monsanto get away with mass murder and theft—we all know that “you can’t fight city hall” and all who seek justice for criminal acts by government are continuously frustrated—how can this be?

Don’t we live in a Constitutional Republic and traditionally pride ourselves that we are a law-abiding people? We are, but we did not pay attention as we surrendered to evil.

Look up Jerome Daly on Wikileaks. I’m surprised the rotten censors have let this continue.

Jerome Daly, a Minnesota lawyer sacrificed his own career and well-being for truth in the Federal Reserve money racket. What happened in the several cases and appeals he brought is thoroughly documented here.

This evil conspiracy carried on right out in the open, covered by newspapers publishing the details and facts but never telling the whole story. The courts of this land have illustrated the truth of Masonic judicial corruption as blatantly as the villains of 9/11 illustrated evil.

In a nutshell, Jerome Daly faced foreclosures by banks, and decided to challenge the corrupt Federal Reserve counterfeit money with the Constitution, exactly as Ron Paul is doing. Daly also represented Charles Muncaster of Montgomery, Alabama in a Constitutional challenge against the draft laws of 1967. The results in both challenges were killed by application’s of law other than the constitution—in other words—legal corruption well known as English common law.

The US. District courts forbade Daly to ever take up such “deliberate and aggravated…contumacious conduct” in any courts ever. He refused to quit, was charged with contempt, And disbarred.

It was all perfectly legal. How did this dastardly situation happen in the land of the free, but home of easily deluded fools?

In one of her many newsletters published in 1969, Helen M. Peters explained it as part of the British Crown’s ongoing movement to control the world. She showed in detail how the worst enemies of free Americans, and of Jesus Christ, were the Empire that adopted the Jewish religion—the City of London and its Mercantile power.

She wrote: “The American Bar Association was developed and masterminded by an old-world syndicate—mainly the House of Rothschild and Lloyds of London. The purpose was to eliminate our Constitutional laws and replace them with the caste system, or King’s laws of England.”

“In 1951, the foreign dominated California Bar passed a statute stating that all California courts shall use the King’s law of England whenever possible.In 1959, the American Bar (The real legislators behind the scenes—TV) insertedthe same rule into the United States codes. Throughout the 13 volumes of the ‘cyclopedia of federal procedure’ it states the British law shall be supreme.

“After months of research through English history of government and courts, I found Lord Coke’s ruling of 1608, which is used throughout the U. S., granting the King’s immunity to all U.S.judges, legislatures and lawyers. This was reaffirmed by US Supreme Court in 1967.

“I also found the brilliant ruling of English judge David Jenkins in 1643 on the supremacy of the King (Crown). Jenkins used as point of authority the fact that the God of Israel himself had appointed both King Saul and David to the throne, and that only the King and his ministers were endowed with the wisdom and knowledge from their God to enable them to make or enforce laws

“Throughout history, the Jews have refused to abide by the laws of any other country. Now, they have taken over the courts and Bar of the US, and are forcing the other 97% to bow to their laws.

“When common persons (citizens) of the United States file suit vs. the corporate establishment (ruling class) all Judges will dismiss said suits as lacking in merit (standing) regardless of fact or evidence. They dismiss under the English common law—The oft remembered ‘Magna Carta of 1215. Whereby King John agreed to the charter giving the Nobility the same hereditary rights as the King concerning land titles—common people could not bring charges against the Nobility. Magna Carta conferred no rights to the people.

“This law was based on the ancient statutes of King Saul, (alleged Israelite lawmaker). No wonder the privileged class of our country contend this is the only just law, as it gives them complete immunity for their crimes.

“Immediately after the ‘Jewish money syndicate’ of the Crown gained control of the American Bar Association, thereby giving them control of the courts and legislative branches of the government, they declared the US Constitution and bill of rights to be the most stupid and idiotic documents ever compiled by man.

“They repealed federal laws against insurance companies and other financial trust, and bought common stock of other companies, taking control of them. Today they own all the major companies of the US

“The American Bar Association authorized Harvard Law School as the American Law Institute to neuter our Constitution and statute laws. They have done a very thorough job on both.

“Their most outstanding act was to insert a clause in the US code that no federal law could be used in any state. The federal courts must use the laws and rules of the state in which the case originated. This nullified all federal law except in the District of Columbia Washington, DC.

Note#1—Mr. Griswold, as dean of Harvard Law school and the man in charge of the subversive American Law Institute, was rewarded for his traitorous activities by appointment to the Solicitor Generals office.

Note#2—Tom C. Clark, as Attorney General under Truman, for his criminal declaration and devotion and loyalty to the truly organized crime of the US nobility was elevated to the Supreme Court. From this he resigned to allow his son, Ramsey Clark, to follow in his footsteps. However, the Bar association did not want to waste talent, so Tom C. was appointed to the Federal Judiciary school in Washington, DC, to train other federal judges in the proper procedure for breaking the law.

While contemplating the role of Harvard in these nefarious thoughts on Americana, I am reminded of something that appeared in a recent column featuring the impressive report on Zionist chicanery by Alison Weir.

“Justice Louis Brandeis, who had a major leadership role in World Zionism, established a secret fraternity within Harvard’s Menorrah Society called Parushim, which is Hebrew for Pharisees. The oath taken by initiates is chilling, especially when you know these men leave Harvard to take power positions throughout society.

“You are about to take a step which will bind you to a single cause all your life. You will for one year be subject to an absolute duty whose call you will be impelled to heed at any time, in any place, and at any cost. And ever after, until our purpose shall be accomplished, you will be fellow of a brotherhood whose bond you will regard as greater than any in your life dearer than that of family, of school, of nation.”

The Yale Skull & bones bunch is talked about all the time, but had you heard about this bunch? The Parushim are taught that to be open about their goals would be”suicidal”—They must work silently through education and ‘infection’.

Helen Peters, became aware and alarmed by the movement to establish “regional government” in the early 1960s and began a personal campaign to stop the insidious movement. The more she researched the more she saw the bigger picture ultimately coming to see clearly the covert absorption of our country/society by the Brutish Israel movement her newsletters fearlessly exposed the details of Regional Government, Atlantic Union, NATO, and globalism in the name of establishing an Earthly Kingdom instead of Christ’s spiritual kingdom.

Despite serious threats, especially from the right wing oxymoron Christian Zionists, Helen, as a studious Christian, exposed the likes of popular evangelists of the day Billy J. Hargis and Carl McIntyre. Her writings are classics in the annals of patriotism. Much of her work is archived at Sweet liberty. org.

Helen read the Congressional records carefully to document her positions, and she uncovered gems such as this one:

“Religious deception is painless inoculation against truth. It cannot be removed from the conscience with surgery, yet it is the motivator of our actions and directly controls our lives. Once man gives over to false religion, he is no longer rational because he originates no thought. His life is controlled by whomever controls his religion.” Senator Joseph McCarthy — six months before his mouth was closed forever.”

Finally, here is a new video by Ryan Dawson that illustrates the point beautifully.