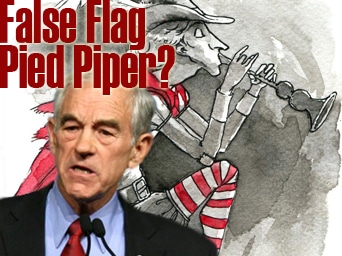 For years my colleagues and I have been asking Ron Paul about a slew of petrochemical disasters in and around his Houston-area congressional district. Several of them occurred during federal terror exercises, and resulted in record profits for Big Oil. He has stonewalled not only us, but also his constituents on this life-and-death subject.

At last there may be cause for hope, though. During a Thursday Austin speech, Paul said he was concerned that a “false flag” attack might be used to plunge the United States into a war with Iran. Hopefully this means that he is now prepared to answer questions about what we believe to have been false flag events in his own back yard.

Some have suggested that Paul’s truther remarks are an attempt to appease false flag students who think that he is simply another establishment apparatchik, albeit one who poses as an anti-establishment rebel. After all, five years before this latest headline, Ron Paul Warns of False Flag in Town Hall .Speech, there was Presidential Candidate Fears “Gulf Of Tonkin” To Provoke Iran War. Between the two “candid candidate” moments, though, there has been half a decade of dodging, while wishful supporters supposed that their man was somehow different from the rest.

On March 3, 2008 W. Leon Smith, publisher of The Lone Star Iconoclast, presented a penetrating editorial about the real situation in Paul’s home district, which is as compelling now as it was then:

Time To Investigate Houston Is Now

Every time there is a disaster or “mistake” involving the petrochemical industry, gasoline prices shoot up. The federal government assures the American public that gasoline prices are going to continue to rise. In fact, recent official predictions suggest $4-a-gallon gasoline this summer.Thus lies the basis for governmental predictions of continued disasters and, ultimately, of an impending new 9/11. They say it’s not if, but when.

The powers that be — including senators running for re-election or a higher office and a lame president — have chosen to embrace the series of oil incidents as accidents. It wouldn’t be in their personal self interests to focus an investigation upon these continued “once-in-a-lifetime” events, for there are profits at risk. Besides, what better way to impose an indirect tax upon the American public?The candidates tout “change” in their speeches. In reality, “change” would be the removal of these parasites from the federal government. “Change” is not imbedding them deeper

These so-called public servants sprinkle upon themselves the image of a ruling class, when in reality they are merely useless employees who have blatantly plundered the public for their own personal gain.They are not patriots; they are thieves. Patriots by now would have taken appropriate actions to investigate why these incidents continue to occur, and then do something about it. This neglect makes them players — and profiteers.

For five years Captain Eric H. May, our military correspondent, has been warning the Houston area, dense with petrochemical targets, that it is the the nation’s foremost terror target. In this issue of The Iconoclast, in Spook and Nuke, he turns his attention to the curious campaign of Commander Brian Klock, an ultra-secretive naval intelligence officer. Klock is seeking the Republican nomination in Texas Congressional District 22, which is the heart of the terror targets zone that Captain May has long identified.

Captain May was the first military expert to analyze the Houston area as the target for “9/11-2B,” the “next 9/11” that official sources and major media constantly remind us is going “to be.”He has asserted that the real danger to the Houston area is not from a contrived terror threat called Al Qaeda, but from sources inside our own government. In his trenchant analyses, he has anticipated the dismal course of the Iraqi war at a time when retired officers senior to him were boasting of a war that was already won, or soon to be won. He has been right on the biggest issues before, and in the face of the most highly touted experts.

In the two years that he has been a writer for The Iconoclast, this newspaper has been intimately aware of his analyses and predictions.Two years ago he predicted to us a major petrochemical event in the Houston area for July 1, 2006. He was accurate to within one day, given the explosion of the Exxon Mobil refinery in the Houston suburb of Baytown, which drove oil to record prices.

In October 2007, The Iconoclast published his The Texas Triangle: Terror and Treason, in which he detailed the process by which he issued a red alert to southeast Texas just hours before the Oct. 18 explosion of a Dow Chemical pipeline in Port Arthur, which had been hosting military/police exercises simulating just that scenario a few days earlier. The Iconoclast staff was directly involved in that emergency alert.

Captain May’s notes and articles, provided to The Iconoclast, back up his claims to have issued the information to the FBI and local media that brought about a terror alert to southeast Texas on March 24, 2004. His prediction day for a major petrochemical incident was March 31, and he was off by one day again. The BP refinery in Texas City exploded on March 30, resulting in record profits for big oil.

In early July 2005, he predicted a July 27 event, and was contacted by the FBI as the day approached. Yet again, he was accurate to within one day, as the BP refinery in Texas City exploded on July 28, yet again resulting in record profits for big oil.

In mid January of 2006, he predicted the attempt of a nuclear attack on Texas City on Jan. 31. On Feb. 1, area residents were highly alarmed to find a U.S. military nuclear team on the Galveston beaches just south of Texas City.. Citizens went on record with their belief that Captain May’s alert had interdicted what was to be a false flag attack. Five news articles, three of them written before Jan. 31, offer invaluable insights on how and why he issued the alert, and what would have happened if he had not.

The rhymes are the “official” stories. The reasons lie in the profits garnered from a hidden agenda masked by a knowing and enabling force holding office.

The Iconoclast exhorts local and national political, military, and police leaders — if any with a conscience remain — to look into Captain May’s results in predicting petrochemical incidents in southeast Texas.Their unwillingness to investigate so far does not argue that this highly trained military intelligence officer is a mere conspiracy theorist, but rather that there is an official conspiracy to attack petrochemical targets in southeast Texas to induce oil profits at will, and perhaps to inflict mass casualties on American citizens.

For Captain May’s many articles on Ron Paul and the false flag operations in his district, refer to his Iconoclast columns, 2006-2009.