Home History The Attack on the LIBERTY 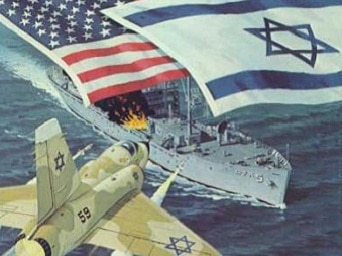 The Attack on the LIBERTY: The Untold Story of Israel’s Deadly 1967 Assault on a U.S. Spy Ship: A Book Review and More

On June 8, 1967, out of a crew of 294, thirty four Americans were killed, 171 wounded and all scarred for life because the USA Government failed to support the troops who continue to request an open Congressional hearing to address the Israeli claim of mistaken identity.

Acclaimed journalist and son of a LIBERTY survivor, author James Scott dedicated his extensively footnoted, compelling and dramatic account to his father, who lived to tell about it and the thirty-four sailors who did not.

In The Untold Story of Israel’s Deadly 1967 Assault on a U.S. Spy Ship, Mr. Scott blows apart the only American investigation that was ever conducted: the U.S. Naval Court of Inquiry’s white wash rush job that confirmed Israel’s claim.

Scott clearly contradicts it by the facts that he uncovered.

Scott’s fast paced tome gives voice to the frustrated outrage felt by many inside the Pentagon, State Department, NSA, Navy and even a few Congregessional representatives.

Among many issues Scott illuminates, is that Israel’s chain of command were well aware of the Liberty’s true identity and he eviscerates their excuse of “mistaken identity” of the uniquely American flag waving ship.

Scott reveals how the American government de-emphasized the attack because of the war in Vietnam and illuminates the American Governments preference in support of the Industrial Military Complex over the lives and well being of American servicemen.

Scott documents that Israeli pilots, air control staff and navy officers in Tel Aviv and Haifa were aware that before their unprovoked brutal torpedo attacks on the unarmed spy ship that the vessel was definitely American.

Many years after the attack, Lieutenant Colonel Shmuel Kislev, the chief air controller at general headquarters in Tel Aviv, confessed that he knew the U.S.S. LIBERTY was an American ship as soon as an Israeli pilot radioed in its hull numbers.

Two months before the sailor’s mass burial at Arlington Cemetery, Navy analysis also uncovered that the Israeli torpedo boat gunners had targeted the spy ship with 40-mm tracer rounds made in the United States.

In 1967, the Republican representative from Iowa, H.R. Gross asked questions that still demand an answer today:

“Is this Government now, directly or indirectly, subsidizing Israel in the payment of full compensation for the lives that were destroyed, the suffering of the wounded, and the damage from this wanton attack? It can well be asked whether these Americans were the victims of bombs, machine gun bullets and torpedoes manufactured in the United States and dished out as military assistance under foreign aid.” [Pages 271-272]

By November 1967, lawmakers were willing to spend six million USA tax dollars to build schools in Israel but during the debate, Representative Gross spoke with the voice of conscience and introduced an amendment that “not one dollar of U.S. credit or aid of any kind [should] go to Israel until there is a firm settlement with regard to the attack and full reparations have been made [and Israel] provides full and complete reparations for the killing and wounding of more than 100 United States citizens in the wanton, unprovoked attack…I wonder how you would feel if you were the father of one of the boys who was killed in that connection-or perhaps you do not have any feelings with respect to these young men who were killed, wounded and maimed, or their families.” [Page 272-273]

Gross’s amendment failed, justice remains delayed and American tax payers continue to support the Ethnocratic State of Israel which has reaped a more violent and insecure planet for innocent civilians.

On May 28, 1993 Ariel Sharon explained: “The terms ‘democracy’ or ‘democratic’ are totally absent from the Declaration of Independence. This is not an accident. The intention of Zionism was not to bring democracy, needless to say. It was solely motivated by the creation in Eretz-Isrel of a Jewish state belonging to all the Jewish people and to the Jewish people alone. This is why any Jew of the Diaspora has the right to immigrate to Israel and to become a citizen of Israel.”

In another must read for Congress, An Israeli in Palestine: Resisting Dispossession, Redeeming Israel, Jeff Halper, American Israeli and co-founder and coordinator of Israeli Committee Against House Demolitions and Professor of Anthropology, explained:  ”An ethnocracy is the opposite of a democracy, although it might incorporate some elements of democracy such as universal citizenship and elections. It arises when one particular group-the Jews in Israel, the Russians in Russia, the Protestants in pre-1972 Northern Ireland, the whites in apartheid South Africa, the Shi’ite Muslims in Iran, the Malay in Malaysia and, if they had their way, the white Christian fundamentalists in the US-seize control of the government and armed forces in order to enforce a regime of exclusive privilege over other groups in what is in fact a multi-ethnic or multi-religious society. Ethnocracy, or ethno-nationalism, privileges ethnos over demos, whereby one’s ethnic affiliation, be it defined by race, descent, religion, language or national origin, takes precedence over citizenship in determining to whom a county actually ‘belongs.'”-Page 74.

“Since the October War in 1973, Washington has provided Israel with a level of support dwarfing the amounts provided to any other state. It has been the largest annual recipient of direct U.S. economic and military assistance since 1976 and the largest total recipient since World War ll. Total direct U.S. aid to Israel amounts to well over $140 billion in 2003 dollars. Israel receives about $3 billion in direct foreign assistance each year, which is roughly one-fifth of America’s entire foreign aid budget. In per capita terms, the United States gives each Israeli a direct subsidy worth about $500 per year. This largesse is especially striking when one realizes that Israel is now a wealthy industrial state with a per capita income roughly equal to South Korea or Spain.”[1]

During Fiscal Year 2007, the Congressional Research Service’s “U.S. Foreign Aid to Israel,” written by Jeremy M. Sharp, Specialist in Middle Eastern Affairs, [updated January 2, 2008] reported that the US gave Israel at least $2,500.2 million in 2007. This number does not include the $137.894 million we spent on joint U.S.-Israeli missile defense projects or the $1.4 billion in loan guarantees made available to Israel in 2007. [Ibid]

While U.S. economic aid to Israel has been phased out, it has been replaced with increasing military aid paid for by American taxpayers with over $3.1 billion annually that go to provide even more weapons of destruction to one of the most powerful militaries the world has ever known.

The United States has given more money to Israel than to any other country, and the “indirect or consequential costs to the American taxpayer as a result of Washington’s blind support for Israel exceed by many times the amount of direct U.S. aid to Israel. Some of these ‘indirect or consequential’ costs would include the costs to U.S. manufacturers of the Arab boycott, the costs to U.S. companies and consumers of the Arab oil embargo and consequent soaring oil prices as a result of U.S. support for Israel in the 1973 war, and the costs of U.S. unilateral economic sanctions on Iran, Iraq, Libya and Syria. [Ibid]

During the Bush Administration, Israel killed more than 3,000 Palestinian civilians-including more than 1,000 children during its December-January war on the Gaza Strip-with U.S. made weapons in violation of the Arms Export Control and Foreign Assistance Acts.

In 2007, the United States Government agreed to increase military aid to Israel by 25% over the next decade, totaling $30 billion.

“In May 2009, President Obama sent his FY2010 budget request to Congress which includes $2.775 billion in military aid for Israel, an increase of $225 million from this year’s budget. The budget request will go to the Senate and House Appropriations Subcommittees on State, Foreign Operations, and Related Programs for hearings and “mark-ups”.
“This request for an increase in military aid to Israel comes despite the fact that Israel consistently misuses U.S. weapons in violation of the Arms Export Control and Foreign Assistance Acts.” [2]

The Pentagon dismantled the spy ship program in 1968, but LIBERTY survivors and supporters continue to pursue justice.

June 8, 1967, will forever remain a day of infamy because it was the first time in history that the US NAVY was delayed from coming to the aid of an American Ship under attack. Although, planes were launched from the USS SARATOGA, they were called back by the Secretary of Defense, Robert McNamara and President Johnson accepted the Israeli excuse as he did not want to “embarrass an ally.”

Israel paid minimal compensation to the families of the crew and six million for damages to the unarmed spy ship which in fact should have exceeded 40 million. Israel has never acknowledged that the attack was premeditated and instead, blamed the victims.

In recent years, Admiral Moorer, General Raymond Davis, Rear Admiral Staring, Ambassador James Akins and others have come forth stating the attack was deliberate. They all asked for a new Court of Inquiry be convened by the Department of the Navy with Congressional oversight, to thoroughly investigate the attack on the USS LIBERTY, which is the only way justice can be rendered to the survivors.

Admiral Moorer and his distinguished colleagues also called for June 8th to be known as “USS LIBERTY Remembrance Day, in order to commemorate the Liberty’s heroic crew”.

I am a candidate of conscience for US HOUSE of Representatives, and if elected I too will request a new Court of Inquiry into that day in infamy, invite all LIBERTY survivors to speak on the Congressional and seek to establish every June 8th to be “USS LIBERTY Remembrance Day.”

THE ATTACK ON THE LIBERTY: The Untold Story of Israel’s Deadly 1967 Assault on a U.S. Spy Ship by James Scott. Simon & Schuster, June 2009.