Home Veterans Mubaraks Verdict, A Revolution Back To Square One 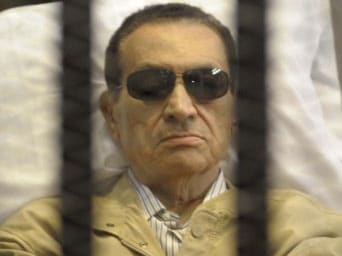 “Watching the Egyptian judiciary acquitting the top police commanders, who were responsible for the killing of almost 900 innocent protesters, is like watching the regime survive the bullet of the revolution and getting back in business, and may be with a vengeance” 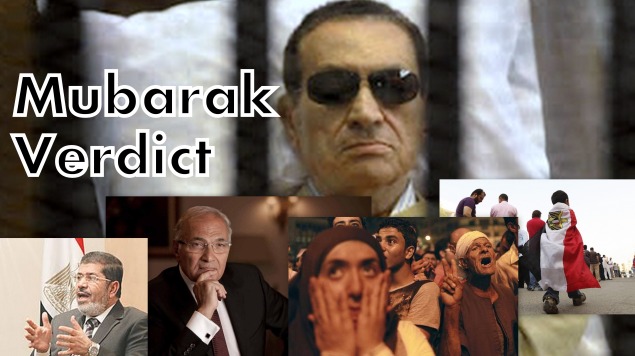 On this same platform, back in August 2011, we have posted an article “Mubarak in the cage for the wrong charges”

In the post we argued that trying Mubarak before a civil court and for crimes of bribery and profiteering, and not for political corruption, would turn his case into some mockery of the law and would eventually fail, in the lack of any incriminating evidence, to bring  justice or even to appease the Egyptian revolutionaries.

Last Saturday, The deposed Egyptian president, Hosni Mubarak, was sentenced to life in prison, a sentence that was deemed fair by many political analysts and observers.

But against all odds, the verdict which, in my opinion, has been tailored to placate an angry people, has instead infuriated the majority of Egyptians and prompted them to head back to Tahrir square to protest not only the trial and the verdict but the whole political process that is due to lead Egypt, on June 16, to the run-off presidential elections, or calling the whole thing off, for that matter.

Something is obviously wrong in Egypt nowadays. All of a sudden, after the revolution, all things began to acquire double meaning and reflect two messages. Meanwhile, the revolution wagon seems to have lost its way.

After toppling Mubarak, The protesters left Tahrir square too soon before they made sure they left some political entity to speak for the revolution demands. Later, Egyptians were conned into voting on a referendum that offered some cosmetic amendments to the old constitution where they should have worked on drafting a whole new constitution to safeguard the democratic turn of the country.

Egyptians had to literally occupy Tahrir square for several weeks to put Mubarak on trial and to struggle with a military council that was adamant on aborting the revolution and keeping the old regime alive.

Egyptians who sobered up after the Muslim Brotherhood took over the parliament, 75% of the seats went to the Islamists, are faced with a bleak scenario that awaits them at the presidential run-off elections.

The seat of the presidency will either go to Muhamed Morsy, the MB candidate, backed by Islamists or to Mr. Ahmed Shafik, Mubarak’s last prime-minister and who, supported by the Copts and the military, makes no secret of loathing the revolution.

The uprising is over, but the protesters keep coming back to Tahrir square. Mubarak has gone, but the regime is pretty much in place. The revolution has managed to topple the dictator but has yet failed to neither produce a popular leader nor deal with any of the Egyptians’ grievances.

The old National Democratic Party (NDP) of Mubarak, which controlled just about every aspect of the country’s political life, is replaced by the Freedom and Justice Party (FJP) the political arm of the Muslim Brotherhood, which is now pretty much in control of the parliament and aspiring to seize the presidential seat as well.

The Egyptian people are not satisfied, they made a revolution that inspired the millions around the world and yet they failed to have a presidential candidate who could really speak for this great revolution.

Egypt is in desperate need for a revolutionary leader who could steer the country away from going back to dictatorship or falling prey to MB and its dream of turning Egypt into a theocracy.

More than 16 months have passed and still the country can’t agree on a national committee, which would represent Egyptians of all creeds and walks of life, to draft the new constitution. And therefore, Egypt, under the rule of the military junta, has been forced to commit the sin of electing a president that no one knows what kind of authorities he will have nor the power he will wield

President Hosni Mubarak gets a life sentence and yet the Egyptians are not satisfied especially that his lawyer intends to appeal the verdict. But if we examined the whole verdict, we would soon discover that it’s completely contradictory and that it was blatantly politicized.

While Mubarak’s minister of interior, Habib El-Adly, was sentenced for life in prison, six of his top police commanders, who were obviously responsible for shooting unarmed protesters, got off the hook and walked home free as the court surprisingly couldn’t link them directly to the killings- a conclusion that millions of TV viewers around the world, who have watched countless footages of the deadly police crackdown on Egyptian protesters during the uprising, would strongly disagree with.

Moreover, as Mubarak was bizarrely acquitted from charges of facilitating and profiteering from the notorious gas deal with Israel, his two sons, Alaa & Gamaal who got their hands dirty from long years of illegal profiteering and ripping off public money were also acquitted by the court.

Obviously, the court was left with no solid case as the key witnesses- Mubarak’s vice-president and the top military generals- were careful not to point the finger at Mubarak in regard to any of the charges pressed against him.

So, the judge had no choice but to try and incriminate Mubarak not for shooting the protesters but for doing nothing to stop the killing, so much for a court of law that at the end of the day had to appease angry people.

It’s true that Mubarak is the first deposed Arab leader to be tried and convicted in his own country, but his trial has failed to deliver full justice as Egyptians feel should righteously take place.

For the average Egyptian, Egypt under the long reign of Mubarak was nothing but a police state.

So, to watch the post-revolution judiciary system clumsily acquitting all the top police officials, who were responsible for the killing of almost 900 innocent protesters, is like watching the regime survive the bullet of the revolution and getting back in business and may be with a vengeance.

The popular anger at the verdicts reinvigorated the revolutionary zeal in Egypt as thousands of protesters began to flock into Tahrir square once again.

After hearing the verdict, thousands have held a sit-in in Tahrir square and were joined by other presidential candidates who didn’t make it to the run-off elections, amongst them, Hamdin Sabahy, who despite coming out of the presidential elections in third place, is considered by many as the newly born leader of the revolution and is now celebrated by millions of Egyptians around the country.

Mr. Sabahy and other revolutionary figures called for forming a presidential council and stressed the urgency to implement the political disenfranchisement law- that denies top government officials who served under Mubarak from running for any public posts.

And needless to say, that the Egyptians would be in for a big surprise if the high court permitted the disenfranchisement law and said that the current parliament is not constitutional due to electoral irregularities.

Should this scenario take place, something that is far from being coincidental, it will be definitely a game changer, as Ahmed Shafik will consequently be disqualified from the presidential run-off and the whole presidential race will be halted until further notice.

In the meantime, Egypt will have to carry on, indefinitely, under the rule of the military, and everybody will be back to square one.