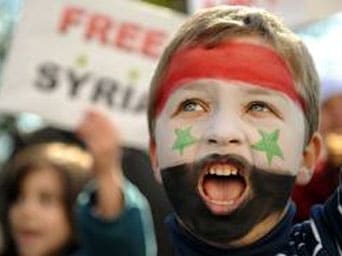 The United States never was on the side of the people of the Middle East and is the only party standing between the Palestinians and their freedom and liberation and always stood the side of criminal dictatorship as they imprisoned, tortured, suppressed freedom and democracy and looted the country.

I too, like so many of my friends on this site, Arab nationalists and all those in support of freedom and democracy in the Middle East, leery and untrusting of the United States and the West involvement and calls for military intervention in the Syrian Spring. Israel and the Zionist agenda always stand out as the only reason and beneficiary of any action the US takes in the Middle East, and Syria is no exception. However we all should tell Bashar his time ran out and he and his Ba’athist regime should go.

The criminal Assad regime never had legitimacy and is no different from that of the regime of Hosni Mubarak. It is a police and security regime that corrupted the political life of Syria and looted the country for over 40 years. The continuation of the Assad regime is a windfall for Israel as it has been for 40 years. Paid for by the blood of the Syrian people and others.

Let us not be fooled by the US efforts in support of the Syrian uprising. The US wants to make sure that whoever rules Syria after Bashar is friendly to Israel, cut off ties with both Iran and Hezbollah. Putting Hezbollah out of business is critical and key issue for the US, France, UK and Germany and of course Israel.

We all need to remember the way the United States and its allies behaved when Hamas won the Palestinian elections, perhaps the most open and transparent election in the history of the Middle East. For the US, democracy and freedom in the Middle East must be in support of “normalization” of the relationship with Israel. Whether it is Tunisia, Egypt, Libya, Yemen, or Syria.

Too bad for the Syrian people, the Syrian National Council and its leadership are a big disappointment and did not match the sacrifices of those inside fighting with their lives and property and its past leadership is unworthy of representing the Syrian Uprising.

The Assad regime is a family and racketeering mafia that ruled Syria with an iron fist since 1970 when the father Hafez, took over Syria in a military coupe. Since then the Assad extended family had a monopoly over politics, finance, business and certainly security services.

When the Syrian people 15 months ago rose and took to the streets in peaceful demonstrations seeking regime change like that of Egypt, and Tunisia, Bashar Assad was not too happy and decided to use his army to snuff the popular uprising. Since then Bashar has made good use of his army to kill and destroy and to commit massacres as we witness in Houla and in Qubair Farm.

Bashar Assad and his regime had a choice, either to implement immediate and drastic reforms to meet the people demand for open, accountable and transparent government and dismantling of the Ba’athist control over every aspect of life or deployed his army, and he chose to wage war on his own people. Unlike Tunisia and Egypt, the Syrian army took the side of the regime, not the people and hence the mayhem.

The Syrian army was never a national army, but a regime and “sectarian” army transformed by the late Hafez Assad to insure the continuation of his dynasty and to insure the Ba’athist Party homogeneity over every aspect of life in Syria. It was deployed in Lebanon in support of the Christian Phalangist during the Lebanese civil war and later own became an extension of a racketeering mafia of drugs, extortion, and smuggling for the key members of the regime, in partnership with key Lebanese politicians. Of course we should never forget the massacre of Tel-Zaater committed against the Palestinian refugees by the Christian militias with the support of the Syrian army.

The Arab world after the experience of Iraq and Libya does not want Western military intervention specially the US under any circumstances. The Arab world had enough of occupation, had enough of killings and destruction, and colonialism. The Arab world is angry at the double standards of the West and its indifference to the Israeli Occupation that lasted for over 45 years and stood silent as Israel waged a relentless attack using all the arms supplied by America and the West to attack Gaza and Lebanon, not once but many times over.

I am sure every one can understand taking up arms against the regime. As I am sure the American people will take up arms if the Republican or Democratic or the Tea Party decide to become a regime, with a monopoly over every aspect of life, and decide to deploy tanks, APC, fighter jets in towns and cities across the US to preserve the regime. If we accept the rights of self defense then we must support the arming of the Syrian people to defend themselves against a ruthless regime that does not hesitate committing mascaras every time and every where. Time for new Syria to rise up from the ashes.