Home Veterans The Role of CIA-pampered Saudi Spymaster in Syria 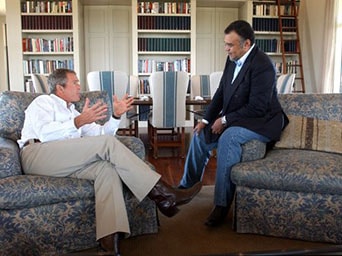 An enigmatic personality who has periodically vanished from the scene of politics in different junctures in time, Prince Bandar bin Sultan was appointed as the Director General of Saudi Arabia’s main intelligence agency on July 19.

The appointment which took place at a critical time, namely when the unrest in Syria was growing gravely worrisome thanks to the influx of the Saudi-funded rebels infiltrating the Syrian soil.

Known as ‘Bandar Bush’ on account of his close ties with former US President George Bush, the prince-cum-spymaster is widely considered as a linchpin in CIA-Mossad dastardly subterfuges in Syria and Iran and his appointment to such a sensitive position is from an intelligence point of view regarded a strategic step to contribute to the materialization of these sinister plans.

The role of CIA and Mossad in Syria unrest is highlighted in an article dated July 18 by David Ignatius who is well-connected to intelligence sources,

“The CIA has been working with the Syrian opposition for several weeks under a non-lethal directive that allows the United States to evaluate groups and assist them with command and control. Scores of Israeli intelligence officers are also operating along Syria’s border, though they are keeping a low profile.”

In view of the complicated nature of the terrorist attack, one cannot easily rule out the possibility of the CIA-Mossad joint operations.

A Wikileaks cable dated May 2, 2007 details how Mossad is contributing covert assistance to Saudi intelligence.

“MOSSAD is using Nicosia, Cyprus as a primary transit hub into Riyadh, to assist the Saudi intelligence services with intelligence collection and advice on Iran. Sources advised the Saudis are playing both sides of the fence — with the jihadists and the Israelis — for fear that the US does not have a handle on either.

Several enterprising MOSSAD officers, both past and present, are making a bundle selling the Saudis everything from security equipment, intelligence and consultation.”

As a main game player in Syria crisis, the regime of Riyadh is reportedly exerting pressure on Jordan to create a buffer zone for the armed gangs and groups fighting to overthrow the anti-Israeli government of President Bashar Assad.

According to a report in the al-Quds al-Arabi Daily, the Saudi monarchy is persuading Amman to join the anti-Syria war by cutting off its financial aid to the country.

The Saudi spymaster Bandar Bin Sultan is tasked with forcing Jordanian kingdom to agree to host the Free Syrian Army on its soil in return for the aid.

In line with this development, Bandar bin Sultan has secretly met with top Jordanian security and military officials along with Saudi Crown Prince Salman Abdul Aziz over the issue.

Saudi Arabia has long been working on a plan to overthrow the regime in Syria and sabotage the Islamic Republic through Bandar bin Sultan who served as the Saudi ambassador to the US from 1983 to 2005.

In 2006, Bandar visited Washington a couple of times and discussed the Bush administration’s plan for a new strategy in the Middle East with former Vice president Dick Cheney and Bush’s Deputy National Security Advisor for Global Democracy Strategy Elliott Abrams.

The two Neocons together with the prince had wrought out a fiendishly meticulous plan to bring about changes to the satisfaction of the US government and the Saudi kingdom. Part of their grand scheme was to bring about regime changes in Syria and Iran and impose a rotten American version of democracy in the two countries.

For his part, Bandar had given them assurances that the Saudi monarchy would wholeheartedly favor this plot.

To this end, the Saudi Kingdom has since then spent a deluge of dollars on carrying out covert operations in Iran and Syria with the assistance of CIA (See The King’s Messenger: Prince Bandar bin Sultan and America’s Tangled Relationship With Saudi Arabia by David B. Ottaway and David B Ottaway p. 257).

With the flourish of Arab Spring in North Africa and the Middle East, Saudi Arabia found quite a good excuse to foment unrest in Syria with the help of the al-Qaeda elements who were readily at its disposal, innocuously attribute it to another popular uprising in the region and pave the ground for a regime change in Syria.

Bandar bin Sultan, who is the secret architect of this crisis, reappeared in his new capacity as the Saudi superspy to accomplish this long-entertained plot.

In this unholy cause they started championing, they saw fit to factor in other intelligence agencies such as Mossad and CIA in order to make sure their modus operandi would raise no suspicions whatsoever.

As time passes and the situation in Syria unravels, the satanic role of Prince Bandar bin Sultan in stoking up chaos in the crisis-ravaged country under the aegis of the Saudi monarchy becomes more crystallized and the thickening plot to overthrow the Syrian regime under the banner of a popular uprising starts to surface.