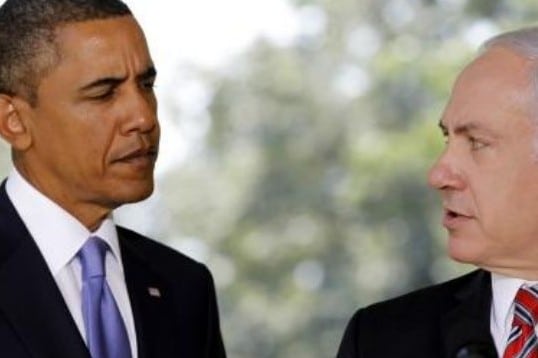 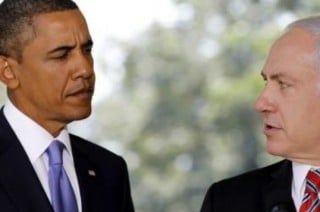 Israel relationship with US damaged beyond repair over Iran attack

by Gordon Duff and Press TV

Editor’s Note:  This was written before the “fast shuffle” that allowed a minority to rescind, shamefully, the will of the Democratic Party

President Obama and the Democratic Party announced today that they would no longer support a “platform” that advocates listing the city of Jerusalem as the capital of a Jewish state.

The President and the majority party made this statement for a variety of reasons, primarily however, based on pragmatism.
The president is assured the vast majority of Jewish voters in the United States, where recent polls indicate only 15% are “concerned” about Israeli security and 4% about relations with Iran, will continue to support him.

These figures reflect the approximate percentages of Jewish voters believed to support Mitt Romney, the Republican candidate tied to extremist elements in Israel and suspected members of organized crime. This minority of “outcasts” have created a bitter divide among the Jewish community in the United States.

Romney’s primary backer in the American Jewish community is Sheldon Adelson, whose history of involvement in gambling in the US and China has led to legal actions and accusations of involvement in prostitution and financial crimes.

The critical aspect of the Democratic platform was the removal of this language which had been included in the 2008 platform:

“The United States and its Quartet partners should continue to isolate Hamas until it renounces terrorism, recognizes Israel’s right to exist, and abides by past agreements. Sustained American leadership for peace and security will require patient efforts and the personal commitment of the President of the United States.

The creation of a Palestinian state through final status negotiations, together with an international compensation mechanism, should resolve the issue of Palestinian refugees by allowing them to settle there, rather than in Israel.

The Republican Party website, www.breitbart.com, whose founder died mysteriously in his early 40s, issued the following analysis of the significant changes in direction for America, changes Romney and the Republicans expressed shock and horror at:

“…the campaign isn’t even saying the borders of Jerusalem are subject to negotiation, which would mean that the western part of the city would remain with the Jewish state. The Obama administration has removed all reference to Jerusalem from its platform, indicating a belief that the entire city is up for grabs.”

Those who believe in a strong United States/Israel alliance should be concerned that this year’s platform does not even pay lip service to these key issues for the future of the Jewish state.”

Today, Republican candidate, Mitt Romney, who recently attended overseas fundraisers, the first American politician to do so as foreign contributions to American elections are a felony, made the following statement:

“It is unfortunate that the entire Democratic Party has embraced President Obama’s shameful refusal to acknowledge that Jerusalem is Israel’s capital. Four years of President Obama’s repeated attempts to create distance between the United States and our cherished ally have led the Democratic Party to remove from their platform an unequivocal acknowledgment of a simple reality. As president, I will restore our relationship with Israel and stand shoulder to shoulder with our close ally.”

Political analysts in the US believe that Netanyahu’s interference in the US electoral process, something that has earned him criticism at home, has led to this change in American policy. Others have seen it coming for some time. Military leaders in both the US and Israel have repeatedly told Prime Minister Netanyahu that threats of military action against Iran were irrational.

Last week, General Martin Dempsey, Chairman of the Joint Chiefs of Staff, America’s highest military leader under the president, traveled to Israel to personally deliver a message to Netanyahu.

The Israeli leader was told that under no circumstances would the US participate in an attack on Iran and that such an act by Israel, were it unilateral, would damage relations between the two nations.

Following this meeting, General Dempsey flew to Bagram Air Force Base in Kabul where his aircraft was destroyed by a missile attack. Sources within the Pentagon indicate that America’s “counter-battery” missile defense system was disabled by a computer virus during the attack, which would otherwise have been impossible.

No source for this electronic intrusion in such a key defense system at such a critical time has been found.

Soon after this attack, General Dempsey announced a cutback of US forces participating in joint military exercises with Israel. The initial force of 5,000 troops has been scaled back to 1,200.

America had also promised to move two AEGIS destroyers into the region. These are naval vessels with advanced air defense systems. Where two had been promised, there will now only be one.

The breakdown of relations between the US and Israel, though several years in the making, is more critical than ever with an Islamic government taking control in Egypt and dozens of Egyptian Army officers friendly to Israel, being forcibly retired.

Israel is in the process of making desperate attempts to repair that relationship which would, as things are progressing, eventually end all control of Gaza, an issue very much at the heart of Egyptian citizens who fought to overthrow the Mubarak regime.

Israel invited the Egyptian President, Mohammed Morsi, to Israel. However, this offer was declined. The issue was reported by Ynet News in Israel:

“There is no possibility for Morsi to visit the Zionist entity,” Gamal Heshmat of the Muslim Brotherhood’s Freedom and Justice Party told an Egyptian online news magazine, Ynet reported.

“President Morsi’s patriotism will not allow him to do so,” Heshmat said, saying that the presidential palace will turn down the invitation.

Avigdor Lieberman issued the invitation Tuesday during a speech at a legal conference. He called for the visit after Morsi said in an interview Monday with Reuters that he would not attempt to overturn the 1979 peace treaty between Egypt and Israel.

In light of threats against Iran, currency instability in Europe, a key shift of allegiance by the US in the days preceding the national election and a new government in Egypt, these issues combined with the serious problems in Syria, have created an atmosphere of failure and powerlessness among political extremists in Israel.

Additionally, military and intelligence leaders in Israel are increasingly public in their criticism of the bellicose statements made by Netanyahu and fellow Likudist militants.

The real loss to Israel will be the “special relationship” with the United States which may have been damaged beyond repair. If this is so, then the “sands of time” may eventually close in on the Israeli state, one that has thus far failed to recognize and adapt to a changing world.