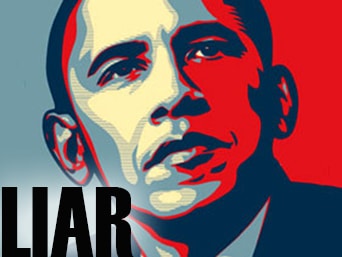 In Barack Obama’s weekly address he spread lies about religions. He said, “But there is never any justification for violence. There is no religion that condones the targeting of innocent men and women.” This is a lie.

Obama was speaking about the Islamic attacks in Libya which killed the US ambassador and three others working for the US embassy. It seems very probable that Obama is familiar with the contents of the Quran and the contents of the Bible. If this is correct, then he had to be lying when he made that false statement.

The Quran has many passages which instruct Muslims to kill unbelievers. For example, Surah 9:5 openly instructs Muslims to “slay the idolaters wherever ye find them, and take them (captive), and besiege them, and prepare for them each ambush.” This is exactly what the Muslims who attacked the US consulate in Libya did. They were following their “holy” scriptures to the letter.

Islam also teaches that men are superior to women and women need to obey men and that men need to beat women who do not obey. Surah 4:34 teaches, “Men are in charge of women, because Allah hath made the one of them to excel the other, and because they spend of their property (for the support of women). So good women are the obedient, guarding in secret that which Allah hath guarded. As for those from whom ye fear rebellion, admonish them and banish them to beds apart, and scourge them. Then if they obey you, seek not a way against them. Lo! Allah is ever High, Exalted, Great.”

There are many other examples from the Quran which show it promotes violence contrary to what Obama says. Why he would like about this needs to be answered. However, I don’t expect any reporters from the established media to ask him why he lied about this important issue.

Obama says he’s a Christian. As a Christian he must have read the “holy” book of his religion, the Bible. His lie in his weekly address is made evident when we read the Bible, too. For example, Numbers 31:17-18 says that Moses was upset with the Israeli army for not killing all of the women and children of a vanquished enemy, the Midianite people. Verses 17 and 18 tell us that he ordered the Israeli army: “Now therefore kill every male among the little ones, and kill every woman that hath known man by lying with him. But all the women children, that have not known a man by lying with him, keep alive for yourselves.” Verse 35 informs us that the number of  “women children” the Israelis kept for themselves was 32,000! Based on these Bible passages Moses was a war criminal and Obama is a liar.

When we look at “the king of peace,” Jesus, we see he wasn’t such a promoter of peace as some people would have you believe. For example, Matthew 10:34 says that Jesus said, “Think not that I am come to send peace on earth: I came not to send peace, but a sword.” It’s true that killing all nonbelievers as the Quran teaches, or killing and raping all people and children who don’t belong to your people as the Hebrew Bible/Old Testament teaches was not taught by Jesus. However, by saying such things as coming “not to send peace, but a sword” is violence promoting. Perhaps this teaching attributed to Jesus played a part in Christianity’s violent past during the Inquisition and Reformation and could play a part if Christianity ever gets the power to once again inflict violence on the world? And the cult like teachings in verses 35-37 of going against your family and whoever loves their parents or children more than they love Jesus is not worthy of Jesus remind me of the teachings of Charlie Manson and Jim Jones.

For Obama to lie about the violent nature of the “revealed”/hearsay religions is wrong. How can we remove religious violence if we don’t even have a realistic knowledge of the violence promoting and producing religions? As the first principle of philosophy states, we MUST see things as they REALLY are. The “revealed”/hearsay religions really are violence promoting. In order to get rid of religious violence we must get rid of the religions that promote violence. The best way to do that is through God-given reason and Deism. As the American founder and Deist Thomas Paine wrote in his landmark book on God, Deism and religion, The Age of Reason, The Complete Edition (for Kindle version click here), we need a revolution in religion based on our God-given reason and Deism. I think the war and violence creating “revealed”/hearsay religions are proving him right!