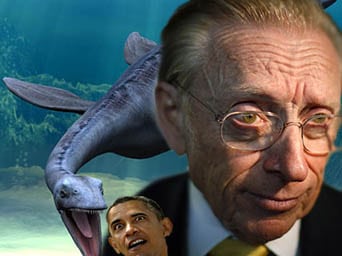 You can’t make this stuff up. Like my crazy friend Vinnie Eastwood says, if I couldn’t laugh, I’d go friggin’ nuts.

Alfred Webre recently attacked me on Vinnie’s show. Alfred thinks I’m an evil disinformation agent, working overtime to hide the state secret of the century: CIA agent Andrew Basiago has not only teleported to Mars with Barack Obama, where he narrowly escaped being eaten by carniverous plesiosaurs – he has also time-traveled back to the Gettysburg Address. (Fortunately, he didn’t kill Lincoln, or we’d all be using Indian-head pennies.)

Anyway, I decided to have some fun with my old pals Larry and Alfred. Here’s my exclusive interview with Silverstein, followed by a musical tribute to Alfred Webre. 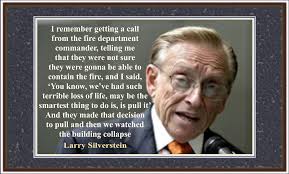 According to the above Travelers Today news report, Silverstein “feels that both airlines should be held liable for the loss of property and business.”

Silverstein “feels”? The reptile-faced capo actually has feelings?! In order to get to the bottom of the mystery of what exactly could be going on in the mind of Larry Silverstein, repeat winner of the All-Time Award for Chutzpah, I sat down for an exclusive interview with “Mr. Pull-It.” The interview was conducted at Silverstein’s new luxury condo, beautifully situated overlooking the blazing beach of the Ocean of Everlasting Fire in the Seventh Circle of Hell, where Silverstein plans to retire and spend the rest of eternity after his execution.

So Larry, you certainly have a lovely view here.

Yes, the big boss downstairs had it built specially for me. After I retire as a mass murderer, crimes against humanity specialist, and insurance fraudster, I look forward to a nice, long, eternal retirement, sizzling on the blazing beach, swimming in the boiling ocean of fire, and being endlessly ripped apart by the sharks of everlasting justice.

Cool. So tell me, why do you “feel the airlines should be held liable” for destroying those asbestos-riddled buildings you demolished on 9/11?

It beats blaming Greyhound or Amtrak, doesn’t it?

Not really. The videos purporting to show passenger airliners hitting the Towers are a joke. They show “Flight 175” going almost 600 miles per hour! A Boeing airliner near sea level couldn’t possibly go that fast, much less fly accurately. It’s just as absurd to say that those videos show a 757 piloted by hijackers as to say they show a Greyhound bus or an Amtrak train.

So what does that say about the airlines?

That they’re innocent, because there were no hijackings on 9/11?

Wrong. It shows that they are guilty…of criminal stupidity! Any moron with two functioning synapses and eyes can see that my terminally-asbestos-infected skyscrapers were blown up, not knocked down by planes. And yet the airlines pretend to agree with me that their two planes knocked down my three buildings. That level of idiocy and cowardice is off-the-charts. Paying me billions of dollars is a very small penalty, compared to what they deserve.

I see your point. But the news story says you “believe that because of a poor security system, hijackers Mohammed Atta and Abdul Aziz al Omari were easily able to board the plane that was used in the attack.” You’ve already admitted explosives, not planes, destroyed the World Trade Center. So what makes you believe that Atta boarded a 767 in Boston? How did he call his father from Canada on September 12th? Why did ten of the alleged nineteen hijackers turn up alive after 9/11, as confirmed by scholarly research published by Europe’s leading academic press? Why are there no actual, numbered, correctly-dated security videos showing any Arab hijackers boarding any of the alleged attack planes? Why have we heard no testimony from any airline employee who would have ticketed and boarded them? Why have the actual ticket stubs, required by law to be saved, never been produced? Why are there no Arab names on any of the absurdly-short, mutually-contradictory unofficial passenger lists? Why was there never an official passenger list for any of the four planes? Why have all the non-Arab passengers allegedly been identified by DNA evidence, yet the US government has refused requests by the alleged hijackers’ relatives to do similar tests to identify the alleged hijackers? Why are so many of the names on those passenger lists people who work in highly-classified military research, including developing remote-hijacking devices? Why were two of the planes not even scheduled to fly on 9/11, while the other two were flying around long after they’d crashed, and only de-registered by the FAA many years later?

That’s why the news story says I BELIEVE the official nonsense. “Belief” does not have to entail supporting evidence. People believe all sorts of crazy things in the absence of evidence. One of the greatest Christian theologians even said: “I believe because it is absurd.” Why shouldn’t I affirm my belief in something absurd, just like everybody else only more so?

The Travelers Today news story says: “Atta and al Omari boarded the American Airlines flight that was headed to Boston at Portland International Jetport. The plane never made it to Boston and was used as a weapon to take down the World Trade Center.” In other words, it says a small commuter plane hit the North Tower. Yet the actual official story claims that Atta took a small commuter plane from Portland to Boston, changed planes in Boston, and flew Flight 11, a 767 not a commuter plane, into the World Trade Center. Did Travelers Today screw up, or has 9/11 scriptwriter Philip Zelikow made yet another change in the official story.

You’ll have to ask Zelikow. I’m just a producer. He’s the scriptwriter. And don’t get me started about Zelikow. Zelikow never tells me anything. He never told me the cover story for Building 7. So I had to ad lib about “how there’s been such a terrible loss of life, maybe the best thing to do is pull it.” That one didn’t go over too well. But it’s Zelikow’s fault – he’s the scriptwriter, and he didn’t give me my lines in time.

Well, something obviously went wrong with WTC-7; blowing it up in full view of the world at 5:20 in the afternoon was not part of the script. You should have been able to ad lib a better excuse than “we decided to demolish it to save lives,” especially since nobody had been inside WTC-7 since around 11 a.m.

Listen, smarty-pants, if you think you can do better at illegal demolition, mass murder, and multi-billion-dollar insurance fraud, you just go right ahead! Historically unprecedented crimes against humanity are not as easy as some people seem to think. You kibbitzers have all the answers: “Larry’s an idiot, he confessed to demolishing 7 on national TV.” Well, what would YOU have said? We have to blow up a goddamned 47-story building in plain sight, the most obvious, perfectly symmetrical, free-fall-speed controlled demolition in history, crimp at the top, countdown goes out over police radio, the works…what am I supposed to say, that it just fell down because of a couple of tiny office fires? It just committed suicide for no reason? How the hell am I supposed to know that they’re going to choose such a ridiculous alibi? “It just fell down from tiny office fires.” What a goddamned joke! That’s only about a million times stupider than saying Elvis blew it up from outer space. Zelikow thinks he’s such a genius, but he’s the biggest goddamned idiot I ever met in my life. He couldn’t cover up a fucking teacup with a tablecloth.

The article says: “Silverstein has already received damages from his insurer, but he is looking for more. The hearing of his case was on Thursday and focused on the destruction of 7 World Trade Center which also collapsed after the attacks, according to Reuters.” How can you be asking for billions of dollars in insurance money from the airlines for the destruction of Building 7, when not only was Building 7 never hit by a plane, but you’ve actually confessed on national television to blowing it up yourself?

I told you earlier: Since the airlines are going along with the “blame the planes” ruse, they are guilty of terminal stupidity, cowardice, and complicity in crimes against humanity. Every executive from those airlines, and every one of those lawyers, deserves to be right up there on the scaffold next to me. When my close mafia associate Judge Hellerstein orders them to pay me billions of dollars, they’ll be getting off lightly.

Maybe so, but you’ll be getting off a lot more lightly. At least for awhile.

Well, they didn’t name the chutzpah award after me for nothing. Listen, I have to get going – I used my first round of WTC insurance money to buy the Sears Tower, and we’re setting up some “eye-rainian” mini-nukes there, if you catch my drift.

Okay, thank you, Larry Silverstein. Here on Truth Jihad Radio we do appreciate people telling the truth boldly and frankly, like you did when you confessed to demolishing Building 7. I’m glad you’re still speaking as boldly and frankly as ever.

Happy to have gotten away with it.

That was Larry Silverstein, all-time Chutzpah Award winner, self-confessed demolisher of World Trade Center Building 7, insurance fraud criminal, and conspirator in crimes against humanity, “telling it like it is” right here on Truth Jihad Radio.