Home Veterans Pakistan’s JF 17, A Jewel in the Sky 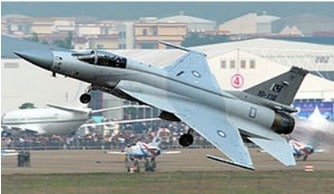 The JF-17s left for Zhuhai with a pride, braving some of the harshest climatic conditions en-route. The aircraft flew more than 5500 Kilometers high over the snow-covered mighty and majestic Himalayas, Thunders landed at Zhuhai, China with two refueling stops on the Chinese Bases. The climatic condition at Korela where the mercury was minus 10 Celsius was enough to test operational capability in such freezing temperatures.

JF-17s arrived at Zhuhai to once again steal the show from the jaws of the well-established competitors from the West.  The Zhuhai Air Show in China attracts thousands of visitors from across the globe where the JF-17 Thunder was once again expected to remain the “Star of the Show” yet again; truly JF 17 lived to its reputation.

Pakistan Air Force has a rich history having produced legends like Nur Khan, Asghar Khan, M.M. Alam, Saiful Azam, Sarfraz Rafiqui and many more. Based on the foundations provided by them, PAF has risen above the Himalayas that make it a desired Air Force by the friendly countries to hold joint exercises with their Air Forces on regular basis; host countries also desire its participation in their Air Shows around the world.

JF-17s were no strangers to the skies of Zhuhai; these eagles had flown there before also that earned them world recognition. Besides Zhuhai, JF-17 Thunder has taken part in Farnborough Air Show, UK (June 2010), Zhuhai Air Show, China (Nov 2010), Turkish Air Show (Hundred years celebration of Turkish Air Force) at Izmir, Turkey (May 2011) and Dubai Air Show, UAE (Nov 2011). Where ever it participated, it stole the show with thunderous applause.

The co-produced JF-17 Thunder is a true depiction of Pak-China friendship. When in the skies, JF 17 is a jewel for its both elegant looking and lethal as it could be. For its cost, it’s a very effective technology that competes the best in its class; it is rightly termed as Pakistan’s pride.

At Zhuhai, JF-17 (Thunder) that was co-developed (by PAF & CATIC), and co-produced by PAC (Pakistan Aeronautical Complex) and CATIC (China Aero-technology Import Export Corporation) was put up for static as well as aerial display in the Air Show.

At present, JF-17 aircraft stands prominent in its own class of fighters. In the present environment, when defence budgets are shrinking and Air Forces face difficulties in affording modern combat aircraft, JF-17 offers a highly cost effective solution with cutting edge capabilities. In the shape of JF-17 aircraft, Pakistan Aeronautical Complex and CATIC offer a cost- effective, highly potent, multi-role combat aircraft which is capable of meeting the challenges of present and future Air Power employment.

Today JF-17 is to Pakistan what Mirage was to France in the 60s. If cards are played properly, JF-17 can turn around the economy of Pakistan much like as Mirage turned around the French economy.

The JF-17 Thunder is an all weather, multi-role, light combat aircraft that has the potential to be the main stay & work horse of any Air Force.  The design of JF-17 aircraft is based on modern concepts of aerodynamics.  The aircraft is equipped with a digital fly-by-wire flight control system that gives it the agility in all regimes of the operational flight envelope. The JF-17 has a complete glass cockpit, excellent man-machine interface and modern self–protection suite, which enhance combat potential and survivability of the aircraft.  The JF-17 is equipped with fourth generation avionics systems, wide range of conventional & smart weapons, long range glide bombs, BeyondVisualRange & short range Air-to-Air missiles, Anti-Ship missile and Air-to-Surface missiles.  The aircraft requires remarkably short lengths of runway for take-off & landing, which offers flexibility of aircraft operations at short air strips. The aircraft are being planned to have Air-to-Air refueling capability, which will further enhance its combat potential and employment options.

Pakistan Air Force has inducted JF-17 in its fleet and with the co-production in full swing the aircraft are rolling out from Pakistan Aeronautical Complex (PAC) Kamra. The JF-17 Program has been a success story since its inception in 1998. Developmental work on the aircraft commenced in the year-1999 and detailed design was finalized in September, 2001. After flight testing, a Small Batch of 08 aircraft was produced in year-2007 and finally serial co-production of the aircraft started in Pakistan in the Year-2009.  So far PAF’s two Squadrons have been equipped with JF-17s, while the third is planned to be raised by early next year.

There is no doubt that PAF has a large number of obsolete inventory to replace with JF-17s but it would be highly desirable to have simultaneous export program also so as to create display windows outside. What it would mean is to expand the production facility to meet both demands at home and abroad. This policy would pay rich dividends in the long run. It’s a jewel crafted with precision to cherish the eyes and same time provide a lethal punch that’s needed to defend the skies.

(Feel free to contact your VT rep for a test drive)