Home World “We Didn’t Know There Were Chemical Weapons”

In War, Truth is the First Casualty 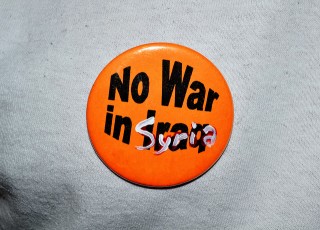 Everyone, even Obama, knows Assad would have to be psychotic to launch a chemicals weapons attack with UN inspectors only miles a way.

The whole world knows the CIA has been training rebel fighters (it’s not a secret when you read it in the Wall Street Journal) and coordinating arms shipments from Saudi Arabia and Qatar.

The whole world knows that Obama’s claim about Assad deliberately gassing innocent civilians is just a pretext. This time they know the President is following a decade-old Pentagon strategy to bring the Middle East and North Africa under US military control.

The countries General Wesley Clark identified back in 2007 were Iraq, Syria, Lebanon, Libya, Somalia, Sudan, and Iran. The British parliament knows all this, which is why they voted not to participate in illegal military aggression against Syria.

The script is so old it’s predictable. Neither Obama nor Kerry waits for the UN to confirm the evidence. The UN is irrelevant – the truth is irrelevant. Neither is willing to entertain any alternative explanation for the 335 deaths and 3,300 near-fatalities that occurred in Gouta two weeks ago.

There is widespread speculation that the Gouta incident was a “false flag” event to make it appear Assad was responsible for the attack. The most likely scenario would been orchestrated by US, British, or Israeli intelligence using al Qaeda-linked Syrian rebels to carry out. This speculation is supported by emails between British intelligence officials that were uncovered in January by a Malaysian hacker.

An even more plausible explanation comes from an August 29 MintPress News article. Written by a Syrian reporter named Yahya Ababneh and an AP correspondent Dave Gavlak, it suggests a false flag event was being staged when the chemical weapons canisters discharged accidentally.

Ababneh interviewed several Gouta-based rebels who claim they were given chemical weapons canisters by Abu Afesha, a Saudi militant who leads one of the rebel battalions. They were told the weapons came from Saudi intelligence chief Prince Bandar bin Sultan, who has extensive CIA ties (at least according to the Wall Street Journal).

Another rebel leader in Gouta named “J” agreed. He added that some of the fighters mishandled them and set off the explosions.

Who Is Prince Bandar bin Sultan?

The MintPress article then quotes from the Daily Telegraph about secret Russian-Saudi talks in which Bandar offered President Putin cheap oil, a promise to safeguard Russia’s Syrian naval base, and a guarantee that Chechen terrorists (which Bandar claims to control) won’t attack the Russian Winter Olympics – all in return for ending Russian support of Assad.

In other words a classic protection scheme.