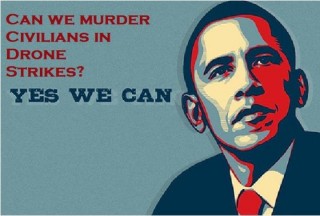 I just read a Washington Post story headlined “U.S. weighs lethal strike against American citizen.” The Post says you are thinking about using a drone to murder a US citizen who has been accused of “plotting against American targets.”

“Plotting against American targets.” That isn’t very specific, is it? Back in the day, before I was Muslim, I used to plot against American targets all the time – in fact, I did it every time I played darts in the local pub. Not only did I plot, I sometimes actually hit the target! Good thing there were no drones in those days. Sometimes I wonder how we survived.

Now that I’m Muslim, I don’t plot against dartboards in pubs any more. So don’t drone me, bro!

But if some dude “plotting against targets” deserves to get whacked, I’d say there must be a lot of other folks who deserve it even more.

Take Rep. Mike Rogers (R-Mich.), chairman of the House Intelligence Committee. He says you should be drone-whacking all kinds of people, but you’re not –  “ because of self-imposed red tape.”

“Red tape” like the Constitution and its due process clause?

This Rogers guy isn’t just plotting. He’s using his powerful position to shred the Constitution of the United States of America. That’s treason – a capital crime. Some would call it the worst capital crime. If anybody in the world deserves to be extra-judicially executed, it is Mike Rogers.

While you’re at it, you might as well whack the entire Congress. Just about all of them have voted for shred-the-Constitution legislation.

It would save the taxpayers a lot of money if you just called in a tactical nuclear drone strike against Congress while it’s in session, rather than trying to whack the traitors one-by-one. The handful of Congressional reps who aren’t traitors, like the 13 Senators who voted against NDAA, could be warned in advance – the same way the Israelis at Zim Shipping, and all Hebrew-speakers using Odigo Instant Messaging, were warned before the World Trade Center was blown up.

You’ll also have to drone-strike the Supreme Court, which has presided over the destruction of the Constitution with nary a whimper.

And while you’re taking out the big-time traitors, don’t forget to whack Bush, Cheney, Perle, Wolfowitz, and the rest of the PNAC scumbags who murdered almost 3,000 Americans during the 9/11/2001 “New Pearl Harbor.” Additionally, a tactical nuclear drone strike against the next AIPAC convention, and smaller pinpoint strikes against the traitors of JINSA, wouldn’t be a bad idea. 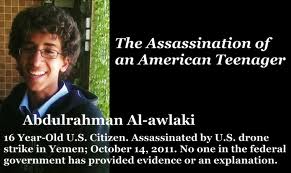 After you’re done cleaning house, you’re going to have to face the fact that by extra-judicially executing all these American citizens, starting with al-Awlaki and his kid, you yourself will have become the very worst of the whole treasonous lot. That means you’re going to have to finish the job by holding a drone up to your own temple and pulling the trigger.

By becoming the first sitting US President in history to commit suicide-by-drone-strike, you will go down in history as a national hero who saved the US from the tidal wave of treason that broke over America beginning with the JFK assassination and reached epic levels of destructiveness with the 9/11 false flag operation and its aftermath.

Calling in a drone strike against your own treasonous ass would be the noblest act of self-sacrificing national service ever performed by a US President. Your smug, pompous face would be up there on Mount Rushmore in five years, tops.

And besides, I’m sure Michelle would be ecstatic.