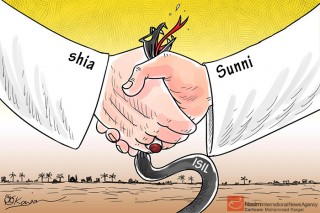 The corporate media casts the fighting in Iraq as a Sunni vs. Shia conflict. The Sunni side, according to these reports, is led by ISIL – a group that was expelled from al-Qaeda for being too extreme.

But is ISIL really Sunni?

Many experts say “no.” Some question whether ISIL has a right to call itself an Islamic group at all.

In an interview with Truth Jihad Radio, Islamic scholar Dr. John Andrew Morrow (Ilyas Abd al-‘Alim Islam) questioned ISIL’s Islamic credentials: “A lot of so-called jihad (such as ISIL’s) is not rooted in Islam. Especially if you look at who’s funding it, who’s supporting it, who’s behind it. Western powers have a long history of using jihadists and Islamists to further their own imperial ambitions. In terms of the foot-soldiers, they may think they are fighting for Islam. But if you look closer, you find they’re furthering the cause of the enemy.”

Dr. Morrow pointed out that much of ISIL’s behavior is patently un-Islamic. He said that the ISIL terrorists love to film themselves committing war crimes that are forbidden by Islam: “They are very proud to commit atrocities. They film it. They upload it to the internet. They have their own websites.”

If these terrorists are Sunni Muslims, why are they systematically violating the tenets of Sunni Islam?

In fact, ISIL appears to be far outside of Sunni Islam. The kind of “Islam” espoused by the ISIL Takfiris is an extreme version of the Salafi-Wahhabi school of thought. These people reject the five major Islamic madhhabs (schools of thought) including the four Sunni ones. If you reject all four Sunni madhhabs, how can you call yourself Sunni?

No Sunni in history would recognize this as Sunni Islam.

Zaid Hamid, a Sunni Muslim defense analyst from Pakistan, says ISIS and related terrorist groups are not Sunnis, but Kharajite heretics serving an imperial anti-Islamic agenda. (The Kharajites were an ultra-radical group that rejected early versions of both Sunni and Shia Islam and stepped outside of the Islamic community – hence their name, which means “those who step outside.”) Hamid argues that the ultra-radical groups destabilizing Pakistan, Syria and Iraq have indeed stepped outside of Islam, and are making war on Islam and Muslims on behalf of Zionism and imperialism.

But isn’t it true that many Sunni Muslims in Iraq support ISIL?

Yes and no. It is true that some ordinary Iraqis from Sunni backgrounds have joined ISIL’s insurrection in Iraq. But these are mainly pro-Saddam revanchists, not religiously-oriented Sunni Muslims. Saddam Hussein, of course, was a radical secularist whose idols were Stalin and Hitler. Saddam’s Ba’ath party was anti-religious and pro-secularist; Saddam’s hatred of the Islamic Awakening was so extreme that he launched a war on the Ayatollah Khomeini’s new Islamic Republic in hopes of preventing the rebirth of Islam. So to call the Saddam Hussein supporters who are joining with ISIL “Sunnis” is misleading. Saddam’s forces, like ISIL, are opposed to Islam in both its traditional Sunni and Shia forms.

The Tradition of Prophet Muhammad (PBUH) is one of inclusion, tolerance, mutual respect, and the forging of alliances between people of different tribes and religions. The original Muslim community, whose founding document is the Constitution of Medina, consisted of Christians, Jews and Muslims living together and sharing power and obligations on an equitable basis.

The real Sunna (Tradition) holds to reason and persuasion, and uses violence only as a last resort. The Prophet Muhammad (PBUH) and his Family and Companions preached peacefully for 12 years, despite atrocious persecution, before God finally authorized them to fight back in self-defense.

The real Tradition of the Prophet respects knowledge so much that “the ink of the scholar is more precious than the blood of the martyr.” And the consensus of the Islamic community is that the work of 14 centuries worth of Islamic scholarship – the five major Islamic madhhabs, both the four Sunni madhhabs and the Shia Ja’fari madhhab – collectively represents mainstream Islam. All Sunni Muslims have tremendous respect for Imam Ja’far al-Sadiq, who founded the main Shia madhhab. The terrorists who reject this tremendous scholarly achievement, and want to kill everyone who disagrees with them, are far outside of normative Sunni Islam.

So why does the Western mainstream media insist on calling anti-Sunni, anti-Shia groups like ISIL “Sunni”?

Perhaps the problem is laziness. Since ISIL has a special hatred for Shia Muslims, the simplest way to portray them is to paint the situation as an alleged Sunni vs. Shia conflict. By defaulting to this lowest-common-denominator description, the media absolves itself from the duty of explaining, in detail, what is actually going on.

But it is also possible that the corporate media is intentionally misreporting the situation. The extreme-Zionist neoconservatives launched the US invasion of Iraq in order to break up that country, and the Middle East as a whole, by inciting ethnic and sectarian strife. The “Sunni vs. Shia” meme was created and spread by the Occupiers through a wave of false-flag terrorism. Perhaps the media is trumpeting that meme in order to propagate it.

In any case, the world’s Sunni Muslims are being slandered every time the media calls ISIL “Sunni.” It is time for Sunnis to reject this mischaracterization of their religion. Perhaps Sunni Muslims should file a class action lawsuit against the media outlets that are spreading this calumny.